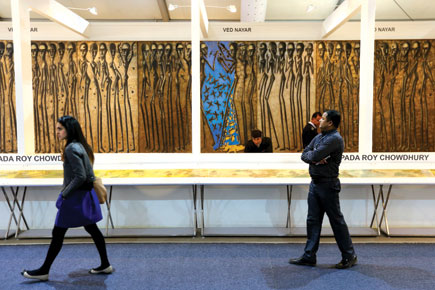 Those of us with more than a passing interest in the fine arts tend to greet each edition of the India Art Fair (IAF) with a feeling of delight mixed with dread.

If the thought of suffering ear-splitting decibel levels while patiently waiting in static traffic on the way to the NSIC Exhibition Grounds in Okhla sends shivers down the spine, then the prospect of experiencing a range of art from across the world inspires an equal excitement as well. Yet, year after year, even after one has braved the inner circles of hell and stepped into this oasis of a visual feast, there remains the problem of plenty.

How does one absorb, let alone retain, the incredible variety of spectacle that is on offer at the IAF without succumbing to visual fatigue after a couple of hours? Is it possible to revive one’s jaded senses even with the best cup of coffee money can buy? Less facetiously, what does this need for quantity, usually at the expense of quality, say of the curatorial principles involved in the art fair, especially of the way it grapples with the challenge of representing the best of contemporary artistic practices from across the South Asian region?

The eight edition of IAF, which ended last week, would probably go down in the annals of art history for being the most considerate in terms of the demands it made on the visitors’ attention. Credit must be given to Zain Masud, who acted as the international director of IAF 2016, for bringing down the number of participants this year. Her selection seemed to have vastly improved the overall appeal of the exhibits, though one can’t exactly claim to have seen anything unforeseen, compared to the offerings from the previous editions.

The Indian artists, which included a fair mix of established and emerging names, did not exactly set hearts aflutter. Subodh Gupta—a stainless steel bicycle with golden bananas hanging from it—could be spotted from a mile. Sudarshan Shetty, Shilpa Gupta and Partha Pratim Deb had their usual, brilliantly cerebral, work on display. In a tribute to artist Hema Upadhyay, who died recently, the Perfume Museum had created a fragrance in her memory.

This year the overarching theme of the fair was art from South Asia, as has been the case for nearly all its previous avatars. The idea though was articulated with much fanfare; at least enough to make it sound like a novelty. Although the majority of the artists and galleries chosen were overwhelmingly Indian, the work brought over by the Nepal Art Council and the Lahore-based Taseer Gallery added spice to the local flavours.

A few of the artists shown by these organisations had predictably run into visa trouble with the authorities, or much worse. Bidhata KC, one of the artists from Nepal, for instance, had to create an impromptu site-specific installation with red pigment dripping off the wall like blood since her work was yet to reach Delhi on the first day of the fair. Among others from her country, Asha Dangol’s dystopic paintings of fantastical creatures in a prospect of birds and Manish Harijan’s light installations and abstract bursts of colour were striking without being showy.

Unsurprisingly, matters were made worse for Pakistanis, as several of them could not cross the border, or did only after much bureaucratic headache. But the art that made it to this side was potent and impressive. Farida Batool’s photographic installation, Why Are You Looking at Me, with hundreds of male eyes menacingly gazing out of it, had me in thrall. In another part of the fair, Experimenter gallery from Kolkata had yet another Pakistani artist, Bani Abidi, whose work has that ever-so-rare gift: of being able to evoke emotions that are universal while staying rooted to geographical specificities.

Yasmin Jahan Nupur from Bangladesh, represented by Exhibit 320 in Delhi, had several abstract paintings, the most beautiful of which being a large-format meditation in blue, drawn line by painstaking line, and complimented by three miniature-sized paintings on the adjoining wall.

Sumakshi Singh’s multi-layered work using colour, thread and fabric, felt like a fitting counterpoint to Nupur’s ethereal landscapes. Meenakshi Thirukode, director of Exhibit 320, mentioned lively interest among potential buyers in these artists. With increased awareness of—and exposure to—art from various parts of the globe, there seems to be a heightened appreciation of difficult, abstract, even obtuse work among collectors of art from South Asia. Artists from the region are experimenting far more boldly, beyond the elegance and visual appeal of figurative art.

The presence of foreign galleries seemed less conspicuous this year and the selection of their exhibits rather cautious, even a bit patronising to Indian tastes. There seemed to be a preponderance of wildlife, in particular of elephants, in general in the paintings shown by some of the exhibitors.

Grosvenor Gallery from London played it safe, with a collection of paintings that were pretty and decorative. Senaka Senanayake, an artist from Sri Lanka, had a set of gorgeous paintings of forest scenes, hyper-real and reminiscent of the luminous lines and colours of Henri Rousseau. Olivia Fraser’s depiction of flora and fauna were also easy on the eye, quite the sort of thing most of us can comfortably exist within our living spaces.

Moving on from the bright colours and gentle strokes in Senanayake’s paintings, it didn’t take long to encounter more pitiful versions of animal life, most memorably perhaps on a canvas depicting a birthday party for cows. The poor creatures had been painted in festive regalia. The inanity behind the idea and its unimaginative execution were matched by some of the visitors’ keenness to take selfies with the painting, only to be upbraided by the gallerist responsible for this bovine art for violating the prohibition on photography.

Perhaps the most dramatic set-up at the fair this year was by Delhi Art Gallery, which has been recently christened DAG Modern. Spread across a considerable section of one of the halls, the gallery had drawn on its rich archive of the Old Masters, from Bengal, Baroda and elsewhere, to create a display that was at once riveting to behold and presented with keen scholarly precision. Complete with video and audio guides, supplemented with accessible wall texts, the entire walk-through gave a comprehensive overview of 20th century Indian art: from Amrita Shergil to SH Raza to Lalu Prasad Shaw, one saw the entire gamut of high modernism play out before one’s eyes.

Among the more adventurous collaborations at IAF 2016 was the Godrej Culture Lab’s pop-up talks featuring some of the drivers of cultural change in contemporary India. Over three days, Archana Prasad of Jaaga Bangalore, Vaibhav Chhabra of Maker’s Asylum, Mumbai, and Ayush Chauhan of Unbox Festival, Delhi, spoke, among several others, about their work: the way they bring their ideas to bear on art, design and technology. Graphic novelists Sarnath Banerjee and Vishwajyoti Ghosh moved the conversation in directions not conventionally associated with the contemporary art scene.

According to Parmesh Shahani, director of Godrej Culture Lab, “It is heartening to see this edition of the art fair not focusing exclusively on exhibition but also looking to build a discourse around emerging trends in the world of art, and expanding the meaning of what constitutes art.”