In Black and White

Residents of Delhi beat up some Nigerian nationals recently, accusing them of ‘eating babies’. The harassment of Africans by Indians is all too common. When will the law catch up with Indian racists? 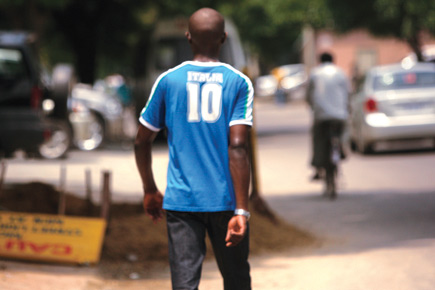 Residents of Delhi beat up some Nigerian nationals recently, accusing them of ‘eating babies’. The harassment of Africans by Indians is all too common. When will the law catch up with Indian racists?


Picture a scene from history. Of the Ku Klux Klan variety. Lose the white hoods. Fast forward to 2010 to the Capital city of an aspiring superpower. It is 30 July, a Friday evening in Ambedkar Nagar, New Delhi. A violent mob of 100 odd men armed with sticks charges into a building rented by some Nigerians, smashes their windows, beats them up and ransacks their home.

One of them jumps from the second floor to save himself. He breaks his leg. Another jumps from the roof. The mob doesn’t relent. They catch him and bash him up badly. Three of the Nigerians reportedly had to be hospitalised.

These are eyewitness accounts of their neighbours. The police, true to our law and order tradition, are said to have arrived in time for the end. The mob, says a neighbour, had to be dispersed with tear gas. The riot police had to be called in. Perhaps the Delhi Police should explain the circumstances that led to this hysteria and why no case has yet been filed for assault and vandalising property.

“An enquiry is on,” is all that HGS Dhaliwal, deputy commissioner of police, South District, will let on. “A case of ‘attempt to kidnap’ has been filed against one of the Nigerians,” he adds. He is not in a mood to give details. His first instinct on being asked about the violent incident is to say that the case belongs to another police station.

A case of attempt to kidnap, did he say? This is where the case gets really ugly. Bizarre stories about Nigerians and their lifestyle seem to have stirred up local resentment. Then, all it took was a child to complain to his mother that a habshi (derogatory for Black) had caught hold of him and taken his Rs 5 coin. All hell broke loose.

“People say that they cut up and eat children, and that in Mehrauli (a nearby locality) they have eaten two or three children. Half a child’s body was found in their fridge. There was a big commotion at that time too. The public had beaten them up then too. The police was called and nothing happened,” says Laxmi, an elderly woman who runs a departmental store down the lane from where the Nigerians lived. She has more tales. “Earlier, there were many dogs here. But now there are no dogs. People say they eat dogs and cats too.”

So how many children have gone missing since the Nigerians moved in? None. A fact confirmed by three people from the locality.

Ask Laxmi for personal anecdotes of Nigerians, and she has some rather warm memories. “One of them was here last week to buy a cigarette. He would always greet my grandchild. He would say, ‘hello’ or ‘good morning’ or ‘how are you?’. And my grandchild would respond to him. But, you know, sometimes children can be cruel. They would call them habshi when they passed by.”

Three days after the mob attack, the Nigerians have moved out. The house-owner, Ram Niwas Bharadwaj, who works at National Council of Education Research and Training (NCERT), was initially keen that Open meet his tenants, but he had a change of mind later. “They are not interested in talking to anybody. They are traumatised. One of them has left the country. Some are at private nursing homes. I cannot provide you any details, as I was not there when the incident took place,” says Bharadwaj. He refuses to share their contact details.

According to the neighbours, there were about six or seven Nigerians who had rented six rooms in the three-storey building. They had been living there for the past three years. Some of them were students. Others were employed.

“They were good people. Our child always played with them. And people have accused them of such a terrible crime. The Nigerian boy who lived on the second floor spent all his time in prayer. He had to jump from the second floor to save his life. But they caught and beat him up anyway… we were helpless. For about an hour, I tried to hold off the mob by refusing to budge from the entrance. But they were getting violent… I had to call the police,” says Nirmal Sharma, who lives on the second floor of the building.

Only one news report (‘Nigerian nationals beaten up by angry locals’, The Times of India, 1 August) carried a statement from one of the Nigerians who lived in the building. Quoting from the report: ‘The allegation that they eat children has hurt them the most. “We don’t eat children. One has to be insane to say something like this… We could not escape. The mob vandalised my house and destroyed everything I had. The Indian government should do something about it,” said Francis.’

On a neighbouring street, there is relief that the Nigerians have been forced to leave. “They should not live here. Today it is the children of the poor. Tomorrow who knows whose child they will pick up,” says Vakila Begum, Mohammad Adil’s mother, the 11-year-old whom the Nigerian allegedly tried to kidnap.

There is no mystery to what happened here. That the Nigerians were harassed because of prejudice is obvious.

It would be naive to believe that what happened in Ambedkar Nagar, though extreme, is a freak incident. Instances of blatant racism against Africans in India are shockingly common: from college campuses to residential neighbourhoods and public spaces. The Nigerian High Commission is yet to respond to Open’s request for comments.

On internet forums, there is obvious outrage and dismay being expressed by the Nigerian community: ‘Indians do not like Blacks. That is nothing new. Just see how Indians treat African Americans.’ (bit.ly/nigeriansinindia)

One can’t help but be reminded of the media frenzy that followed the attacks on Indians in Australia. How we went on and on about those ‘racist attacks’. We wanted instant action from the Australian government.

Perhaps this next comment on one online forum should make the Indian Government think hard about its tolerance for prejudice within India. ‘Aren’t there Indians living in Nigeria?’