In America, a chariot procession means something else, something once associated with hippie culture 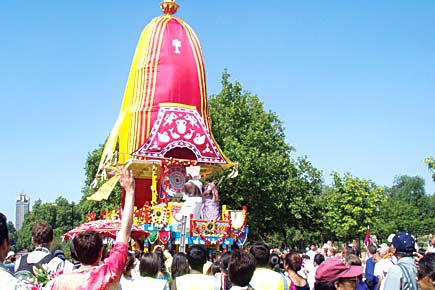 In America, a chariot procession means something else, something once associated with hippie culture


Rath Yatra at Golden Gate Park! I tossed the phrase around and wondered what comes to people’s mind when they hear of it. Here are the responses from around the world of a quick Twitter poll done within minutes:

@ Advani on a chariot (Rath)

@ To me that always sounds trouble—Wrath Yatra!

The Rath Yatra is late. The procession is to come down JFK Drive in about an hour’s time. It’s just past noon. I grab a vantage point in Golden Gate Park for a glimpse of the annual Rath Yatra conducted by Iskon. This is the 43rd year of the yatra, I am told, and the first one was held sometime after that famous ‘Summer of Love’ in San Francisco that saw the birth of the hippie movement. Just outside Golden Gate Park was the hippie epicentre of Haight-Ashbury, where Iskon’s first temple in San Francisco was established.

“Hari Bol!” I suddenly hear an American voice greet me and turn to see a white-haired ponytailed man in jeans and tie-n-dye T-shirt. He is Bir Raghava, an ex-Hare Rama who joined Iskon as a teenager. “I remember the Rath Yatra from 1971,” he says. “The temple was on Fredrick Street then just outside the park. The yatra went from there through the park to the Pacific Ocean, where we had a feast and kirtan on the beach,” says Raghava. These days, the yatra starts outside the park and ends at Sharon Meadow inside it—for the kirtan and feast. The Iskon Temple on Fredrick Street no longer exists. Why did Raghava quit? Things changed after the death of the founder, he says. “Srila Prabhupada, now he was the real deal. My ten years at Iskon were a wonderful part of my life. It changed me completely and opened my horizons and spiritual life. Hari Bol!”

The Twitter responses should not come as a surprise. They’re young. To them, ‘Rath Yatra’ suggests politics in the Hindutva mould. But then, I grew up at a time that it simply meant a chariot procession. The first time I heard the term ‘Hare Rama’ in the US was on the Johnny Carson Show; he mentioned Hare Ramas at Los Angeles Airport. I was perplexed—who were these people? The mystery was resolved once I bumped into one of them at the airport, a young American dressed in white kurta and dhoti with a big sandalwood tilak on his forehead. He was urging me to accept a copy of the Bhagwad Gita.

Started by Srila Prabhupada, the Iskon movement draws on the teachings of Chaitanya Mahaprabhu, who popularised Sankirtana, or singing and dancing. As E Burke Rochford explains in his book, Hare Krishna in America, this was what found its way to the US. Prabhupada’s aim to spread Krishna Consciousness coincided with America’s open season 60s. Prabhupada had a ready-made audience, who found his teachings and austere way of life appealing. Beat poet Allen Ginsberg and Beatles singer George Harrison were some of the well-known followers.

LK Advani rode the 1980s’ backlash against the crumbling Congress edifice in India. Restless Indians wanted an alternative after decades of single-party rule. It was the BJP under Advani that gathered the strength to challenge the Congress.

“Radha Ramana Hari, Govind Jaya Jaya, Gopala Jaya Jaya…” I hear, and then spot three colourful chariots adorned with idols of Jagannath, Subhadra and Balram. I see a mix of Americans and desis pulling the ropes of the chariot to the rhythm of the chanting. I look around and notice that various joggers, skaters, museum goers and other passersby have stopped to take pictures.

There is a queue for “prasadam”, as a young Californian informs me. Zachary Simons (that’s his name) is a team leader for Green Peace for Santa Cruz, who discovered Iskon about four years ago. I wonder why he does not have a traditional Hindu name like other Iskon members. “I am not initiated because it is a big deal,” he responds. Big deal indeed.