Q2L, a new school in the US, is changing the rules of the learning game. 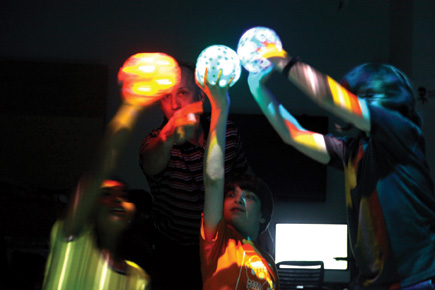 Q2L, a new school in the US, is changing the rules of the learning game.


It’s a concept likely to inspire schoolchild-envy in the hearts of creative-minded people everywhere. “This is design-based pedagogy,” says Katie Salen, a professor at Parsons’ New School of Design. “From day one, kids should imagine themselves as designers of their own learning.”

Salen’s new school, Quest to Learn (Q2L), is the first in the US—perhaps the world—with a curriculum built around gaming, and it may be at the forefront of a learning revolution.

“It’s an amazing experiment,” says Michael Levine, senior associate in The School of the 21st Century Unit at Yale University’s Zigler Center. “The notion that you can use games as an organising principle is sound. But it’s not the games per se that I find so exciting; it’s that the design team is trying to freshen the educational approach with a very new paradigm for learning.”

When the public school opens its doors on New York’s West 23rd Street next month, students will not sit down to study maths and biology from the usual textbooks. Instead, lessons will include knowledge-based video games, like Little Big Planet and Civilization, and conceptual learning exercises. In one, for example, students play the role of a detective, collecting information in order to solve a problem.

The timing is right. “There has been a cultural shift in the past few years,” says Salen, founder and lead designer of the school. “Parents and teachers recognise a kind of engagement children have with games and digital media that could lead to a new way of learning.” Kids today are handy with personal computers, the Internet and all variety of games and gadgets, from the Nintendo Wii to the latest iPhone.

In April, a European Parliament report concluded that: ‘Video games can stimulate learning of facts and skills such as strategic thinking, creativity, cooperation, and innovative thinking.’ Geography students at New Mexico State University are using online avatars in the game Second Life as learning tools. High schools across California and other states are increasingly incorporating videos and online research into presentations and scrapping hardbound texts for digital books. “The question is how can we more effectively blend and balance what is normal for kids in their own lives?” says Levine. “This is a 360 degree approach to using these devices and new technologies.”

New York City is also embracing technology. Dozens of public schools are part of the iTeach iLearn programme, in which junior high students blog for homework and use social networking sites to edit essays. The New York Department of Education took the more ambitious step of approving Q2L a year ago because it fit two key recommendations of a mayoral taskforce: to create innovative schools and to reach kids before they enter high school.

The school will accept only 6th graders this year, then add a grade each year until it offers 6th through 12th grade. Each of the 20 to 25 children per class will have his or her own laptop and, rather than studying individual subjects, will attend four 90-minute periods a day devoted to curriculum ‘domains’ like Codeworlds (a combination of maths and English) and The Way Things Work (maths and science). Each domain concludes with a two-week exam called—borrowing from video game parlance—a ‘Boss Level’. (A detailed sample mission and other information can be found on the school website.)

Games offer rule-based systems that allow students to understand how the interaction of elements in one scenario might be applied to another, or to real-life situations. In exploring how ancient Spartans approached rival city states, for instance, students will learn how to make policy decisions and weigh the costs of war.“I want to dispel this notion that kids are going to be playing video games all day long,” says school principal Aaron Schwarz. “Certainly, technology will be ubiquitous and there will be some game playing. But it’s more about the lessons delivered in a game-like structure that is highly immersive and motivating for the children, yet rich enough for a thorough learning experience.”

Gregg Betheil, a senior technical education executive with the city’s DoE, believes the concept could be “truly transformative”. He is working on the school with Salen and her team of teachers and designers. “We want to make sure it’s not one flower blooming on its own,” says Betheil, “but is part of a network of new and innovative schools that have space to try new things.”

As US President Barack Obama pushes major education reform—his budget pours $170 billion into education for 2009-10, a 90 per cent increase on 2007-08—Q2L might offer some answers. “The major issue that US education faces is this crisis of engagement,” says Levine, citing a 50 per cent urban drop-out rate. “We’re looking for a formula to marry engagement with rigour and this is a serious attempt to do just that…. The philosophy is getting kids to participate and create their own narrative—that’s so important.”

Although Q2L will receive around $1 million in financial support from donors including the Gates Foundation, Intel and the MacArthur Foundation, backers expect Q2L to be wholly funded by the city by 2015. With money comes responsibility: Q2L kids take the same annual maths and reading achievement tests as other New York students.

The school’s designers believe their engagement-friendly approach—each student’s lessons will be refined and personalised by computers that constantly assess and gauge progress—will make all the difference. For Salen and her team, Q2L is less about what students know than how they discover it. “We are,” she says, “deeply interested in creating a school where kids actually love learning.”