With the increasing popularity of LibDems, the UK could see a hung parliament this year, as traditional Labour supporters now have the option of changing their mind without voting Conservative. 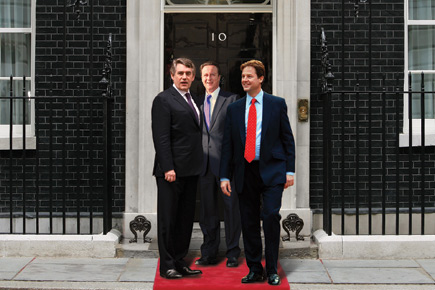 With the increasing popularity of LibDems, the UK could see a hung parliament this year.


India gave them curry. Will India also give them coalition? A heady mix of disillusioned politics and disturbing economics has churned British politics to the extent of speculating whether the coming general elections will throw up a hung Parliament.

Pollsters, punters and pundits alike are reluctant to give either Labour or the Conservatives a clear mandate in the elections expected to be held after May this year. The upward curve of a third party, Liberal Democrats (LibDems), is making them lay a side bet on a coalition government as a never-before option. Latest opinion polls for this month carried by The Guardian show the Conservatives at 40 per cent, Labour 29 per cent and, surprisingly, Liberal Democrats at 21 per cent. Labour may be happy that the Tory lead has come down from 17 per cent last September to 11, but are shaken at the same time knowing that the LibDems are climbing up, mostly at Labour’s expense. (In the 2005 elections, Labour polled 35.2 per cent of the vote, followed by the Tories with 32.4 and LibDems 22 per cent.)

If figures do not change drastically before May, the Tory lead is expected to help them cobble up a simple majority, Labour’s intention then being to work towards a hung Parliament and try and put together the required numbers with the help of a third party, say, the LibDems. Till the last elections in 2005, it was relatively easy for the parties to estimate the number of seats each party will win. That certainty has been erased by the LibDems. Their support appears to be holding up and they are fighting both Labour (in the north) and the Tories (in the south and west). About one in 10 2005 Labour supporters now back the Conservatives, as do about one in five 2005 LibDems. Meanwhile, one in 10 current LibDems has switched from Labour.

All eyes are now on the March session of Parliament when Gordon Brown is expected to unravel his last budget plans. That’s the last opportunity for both parties to make their final poll pitch, with the state of the economy being seen as the ultimate swaying factor.

Ever since the recession set in the second quarter of 2008, nothing has gone Labour’s way. The collapse of big banks and the sizeable capital the government infused to revive them, growing unemployment as even high street chains closed down, the increasing number of body bags coming back home from Afghanistan, rising prices of commodities and public transport ate into Labour support at regular intervals. Then came the MPs’ expenses scandal, which involved members from both parties but happened to scald Labour more, given the severe economic conditions. The public inquiry into the government’s decision to venture into Iraq is the latest to thwart Labour’s attempt to revitalise itself.

Core supporters of Labour, a sizeabale section of who come from the working classes, bore enough of the brunt of the recession to become disillusioned with the Brown government. Even among people who backed Labour in 2005, 38 per cent think it is time for a change, opinion polls show. What is worse is some of them are preferring the LibDems over Labour. Also, Labour has not forgotten the fact that the victory of the extreme-right British Nationalist Party (BNP) in the recent European Parliament elections was more a result of traditional Labour voters sitting at home than any increased support for the BNP.

These factors have contributed to the Conservatives earning a decent lead in opinion polls, but the lack of a decisive leadership has stopped the party from getting the extra edge that could have sealed Labour’s fate. Tory supporters are not generally happy with leader David Cameron, whose actions are compared with Tony Blair’s flimsy style of politics. Cameron keeps flitting from austerity to fiscal finetuning every other week and pronounces on everything from recession to prison conditions for burglars to terrorism to the prime minister’s character flaws. Right-wing commentators say in hushed tones that it is becoming difficult to divine any purpose in Cameron’s utterings.

The Liberal Democrats can scarcely believe their luck. They are now the third-largest influential party in the country, thanks to disillusioned Labour voters changing sides, according to polls. They share some fundamental values with Labour, including the pursuit of social justice through educational opportunity as well as poverty reduction. The Conservatives are at odds with them on crucial areas such as Europe, immigration, redistribution and the reform of the political system.

LibDem MPs want their party to rule out an alliance with the Tories in case of a hung Parliament. However, the official policy of party leader Nick Clegg is that of “equal distance”: He will back the party that has the biggest mandate after the elections. He has his reasons to pursue this policy. If he prefers the Tories as pre-poll partners, there is the fear of pushing some undecided voters towards the Conservatives. At the same time, disillusioned Labour voters—whom Clegg is eager to win over to his side—may decide to back Labour if they feel that the LibDems are playing favourites with the Tories.

The three main parties are preparing themselves for the budget session of Parliament. The Labour camp was agog last fortnight when Prime Minister Brown announced that the recession was formally over. David Cameron was quick to retort that the basis for the announcement was a statistically insignificant 0.1 per cent growth rate in the last quarter of 2009. The Guardian poll that week showed 50 per cent of voters thinking Brown’s leadership has made the recession worse, 28 per cent a lot worse, compared with 43 per cent thinking he has helped ease the crisis.

The biggest economic issues begging Brown’s answers are a growing public debt, increasing taxes and the slide of the pound because of currency devaluation. Not reacting to Cameron’s call for severe cuts in expenditure on social services to reduce the debt, the PM has instead called for easing the debt via growth. He is placing his bets on the economy beginning to grow, which is premised on the manufacturing industry raking in more exports, thanks to the sliding pound. Cameron has since once again gone back on his call for severe cuts being the real answer for growth.

As the political parties prepare their own budget speeches, the release of the latest British Social Attitudes report by Sage this month has caused a political furore by revealing that Britons have become more conservative about key political issues and more tolerant of social differences.

The report says 32 per cent of Britons now see themselves as Conservative supporters compared with 27 per cent for Labour. This is the first general switch in allegiance since 1989. The ideological re-positioning of New Labour resulted in the public developing a generally more conservative attitude, the report says.

Author of the report, John Curtice, professor of politics at Strathclyde University, says: “Labour’s increased spending on health and education was an astute, if delayed, recognition of the public mood in the late 1990s. But now that spending has been increased, the public’s thirst has been satisfied. Unless the financial crisis has persuaded the public to change its mind once again, this new mood could well prove a blessing for whichever party wins the general election.”

The study also shows a general political shift to the right with people’s attitudes hardening towards attempts to reduce inequality. Fewer than two in five now think the government should redistribute income from the rich to those less well off. This figure is down from 51 per cent in 1994.

Curtice observes: “The public, including Labour supporters, no longer believe so strongly in the importance of equality and redistribution by the government. In repositioning itself ideologically, New Labour has helped ensure that British public opinion now has a more conservative character.”

However, a critical revelation of the British Social Attitudes report, which has given an impetus to coalition speculators, relates to voter disillusionment. The report says the number of people voting out of a feeling of civic duty has plummeted in the past 20 years, from 61 per cent in 1991 to 56 per cent now. Political disengagement is most marked in those aged under 35.

Sarah Butt, co-author of the report, says: “Low turnout has been a feature of recent elections, with just 60 per cent of people turning out to vote in 2005. The decline in civic duty means it is possible that, regardless of whether the next election provides voters with a clear choice between parties or a more closely fought contest, we could again see large sections of the population remaining at home on election day.”

In sum, it is a time of political uncertainty that Britons, unlike Indians, are not used to.