Why Narendra Modi should be wary of Vladimir Putin 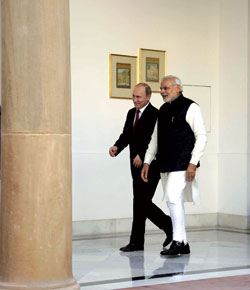 Why Narendra Modi should be wary of Vladimir Putin

Russian President Vladimir Putin visited India on 11 December, and after a year in which he has faced intense criticism on the international stage, he was finally welcomed with open arms by a world leader when he met Prime Minister Narendra Modi. It must have been with a huge sigh of relief that the beleaguered president sat down and discussed business and a joint vision for the world without being moralised at about his conduct in Ukraine, the festering sore on Russia’s heel. Indeed, Ukraine was not even mentioned, in public at least.

The two leaders were able to agree on a number of far reaching deals that will shape Indo-Russian relations for years to come: Russia will build up to 12 new nuclear reactors in India; India will manufacture Russian military helicopters on Indian soil; Rosneft, Russia’s quasi-state-owned oil company, will provide India with 10 million tonnes of crude oil starting 2015; a $1 billion joint-venture for development of hydroelectric projects was agreed upon; and in a logical meeting of giants, Russia, the world’s largest diamond producer, will significantly increase the quantity of diamonds it sends to India, the world’s hub to for cutting and polishing these stones. Finally, to seal the new tone in Indo-Russian relations, Mr Modi declared that Russia will remain India’s principal defence supplier.

So who is Mr Modi’s new friend?

When he came to power on 31 December 1999, Vladimir Putin was greeted in Russia, and to a great extent in the international community, with a large degree of optimism and hope for Russia’s future. After years of seeing the bumbling, often drunk and increasingly kleptocratic President Boris Yeltsin cause embarrassment at home and growing consternation abroad, the overwhelming consensus seemed to be that a young and fit president would bring control and most of all ‘normality’ to Russia, both internally and in its relations with the rest of the world.

In his first years in office, particularly in the aftermath of 9/11, it seemed that the new pragmatist in the Kremlin, who is a former KGB officer and was briefly head of its successor organisation, the FSB, could be a useful ally on the international stage, particularly in the fight against Islamist extremism. The world shut its eyes to Russian atrocities in Chechnya in exchange for Russian cooperation in Central Asia and access to Afghanistan in the fight against the Taliban and Al-Qaeda.

In the last decade, much has changed however, and over the past year in particular Vladimir Putin has shown a disregard for international law and rational conduct in international relations that even the most seasoned Kremlinologists are finding hard to explain. Russia is certainly not the only country to have invaded another country over the last 10 years for spurious reasons and/or advancement of self-interest. But Putin has not only invaded Ukraine, he continues to this day to deny it, in spite of the overwhelming evidence of the presence of Russian troops on the ground. This is not covert assistance to a rebellion, but a full-blown invasion, and the denial of this and the scale if the hypocrisy is what has drawn so much international criticism.

In spite of his growing isolation on the international stage, Putin continues to enjoy unprecedented popularity at home. The factors behind this popularity are the keys to understanding who Mr Modi’s new friend is. The first factor is an unparalleled propaganda machine that does not hesitate to spread outright lies in defence of the second factor, which is a triumphant nationalism of the type not seen in Europe since the dark days of the 1930s, and whose main characteristic is to further Russian power and economic interests in the international arena at any cost. Another feature of this great power game is that when one talks of Russian economic interests and power, one is really talking about the interests of an already very wealthy political elite who control Russia’s energy resources in what is essentially a very private public- private partnership.

Let us begin with the Russian media, which is virtually under Putin’s total control and is used as a vital foreign policy tool. On Ukraine, the media has managed to persuade many inside and outside Russia that it is alone fighting a neo-Nazi aggressor intent on eliminating ethnic Russians and Russian speakers, even going as far as using fake footage and photographs to support these claims (those interested can find a catalogue of fakes on Stopfake.org).

In a striking example of the success of this tool amongst Russians outside of Russia, the author of this article, a fluent Russian speaker who spent much of the spring and summer of 2014 in Ukraine, was constantly contacted by Russian friends deeply concerned for her safety should she dare speak Russian on the streets of Kyiv, the capital of Ukraine. The truth, which they found hard to believe, was that even among Ukrainian government officials within government buildings, Russian is still very often the lingua franca of choice and convenience.

When lies and propaganda are not sufficient in promoting his foreign policy goals, energy is another weapon at Putin’s disposal. There is nothing new here, and before celebrating the new oil deals and nuclear power stations that the New Delhi summit has opened doors to, Indian observers may want to find out a bit more about Moscow’s disposition, and its behaviour when its personal interests and those of its energy partners are no longer in sync.

Ukraine is the most familiar example in public consciousness, as cutting off gas supplies to the country is a favourite Kremlin instrument of control. True, Ukraine has been indebted to Russia for gas supplies for a number of years, and the transit route throughout Ukraine is notoriously ‘leaky’, to the benefit of local oligarchs, minigarchs and the odd bandit with a siphon. But the timing of Moscow’s turning of the screw on the gas taps often coincides with Ukraine’s cozying up to Europe, or the appearance of less pro-Russian leaders in Kyiv.

Pricing is another weapon that Russia uses with its energy clients. In April 2014, as tensions between Kyiv and Moscow escalated, Moscow increased the price of gas to Ukraine by 80 per cent. Average gas prices for Ukraine will be around $375 per cubic metre this year, while friendly neighbouring Belarus only pays $165 per cubic metre.

Less well known to the general public is Russia’s behaviour towards Azerbaijan, a state that borders Russia and sits on the large oil and gas reserves of the Caspian Sea. Until 2006, Azerbaijan was wholly dependent on the Russian pipeline system to sell its oil in international markets. After 2006, thanks to a pipeline built by an international consortium, Azerbaijani oil now travels through Georgia and Turkey to the Mediterranean and thereon to international markets, bypassing Russia. In almost tandem developments, the more Azerbaijan asserts its energy transit independence from Russia, the higher the tensions around a disputed territory, Nagorno- Karabakh, a mountainous region that is claimed by both Azerbaijan and Armenia. The latter is Russia’s ally, and Russia has military bases there. This summer, when Azerbaijan voiced support for Ukraine, crossfire over the territory reached a level not seen for many years.

The 2008 Russian invasion of Georgia, routinely touted as Moscow’s response to Georgia’s desire for greater Euro- Atlantic integration, is seen by many in Tbilisi, Brussels and Washington as an attempt by Russia to dissuade Western consortiums from building more pipelines through what is becoming unstable and dangerous territory. Russia also continues to support separatist regions in Georgia (20 per cent of Georgia is actually under Russian control), and the energy card is used here also to ensure that Tbilisi (the Georgian capital) stays on its toes.

In the tiny former Soviet Republic of Moldova, another, largely ignored, conflict has been frozen since 1994, when a large chunk of the Republic’s territory, Transdniestria, seceded and declared its allegiance to Moscow. Russia is now using the Transdniestrian card in energy negotiations with Moldova, which threaten to bankrupt the tiny nation if it does not recognise the autonomy of a large part of its territory which is basically under Russian control.

Today, the Russian economy is suffering under a quadruple burden of collapsing oil prices, a rouble crash international sanctions and a consequent credit crisis as private firms are no longer able to find global market finance.

The deals signed with Mr Modi will undoubtedly inject some much-needed cash into the Russian system, and it will also make the new relationship with India that much more important. This is a double-edged sword: on the one hand, it could give India a certain degree of leverage over Russia, but on the other, it will make India that much more important for Russia, which could in turn prompt Russia to turn the screw, if so needed, should India start to make noises that Russia disapproves of.

It is also worth remembering that while courting India, Putin is also courting Pakistan: in early December, a military cooperation deal was signed between Russia and Pakistan, and Russia lifted an arms embargo on Pakistan in June. This comes in spite of the fact that two years previously Russia’s deputy prime minister had stated that Russia would never sell arms to “India’s enemies”.

So, what does Mr Modi gain with this friendship? An energy partner it can trust? Russia’s behaviour under Putin’s presidency hardly makes the case for that. It could tie India into a relationship that may limit its freedom of movement on the international stage should it become over-reliant on Russian energy.

During the Cold War, the opposition between East and West had as one of its core conflicts radically different visions on how to build the best system to allow human beings to thrive in dignity and freedom from poverty. Within this framework, a shared concept of equality, anti-materialism, anti-clericalism and an internationalist outlook that transcended small local nationalisms created a particular bond between India and the Soviet Union.

Today, the USSR no longer exists and Putin’s Russia is even more kleptocratic than under Yeltsin. The blurred lines between state interests and private property depend far more on informal networks and pseudo friendships than the rule of law. Nowhere is this more apparent than in the energy sector, where the accumulation of private wealth at the expense of public service and efficiency is amongst the highest in the world. Does this sound familiar? If so, perhaps some very big private fortunes in India and Russia are about to ride on the new wave of friendship between New Delhi and Moscow. Let us hope that these new common interests do not entirely shape the face of Indo-Russian relations. Mr Modi’s image on the world stage could suffer.

(Samantha de Bendern has worked for the European Commission and NATO, specialising in relations with Russia and Ukraine)