Hollywood’s troubled child is now its bestselling actress who also manages the most glamorous family in the world. Open caught up with Angelina Jolie in Cancun, Mexico, and sought the woman behind the superstar. 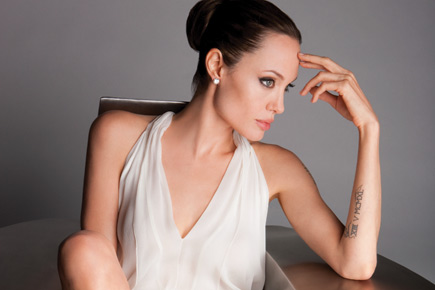 Open caught up with Angelina Jolie in Cancun, Mexico, and sought the woman behind the superstar.


With an odd fascination, you eye the large lizard sunning itself in the hotel portico in Mexico’s beach paradise Cancun, and wonder who will blink first—Hollywood’s biggest female star or the iguana. Earlier in the day, Angelina Jolie admitted to loving spiders and bugs, even having “eaten some in my days in Cambodia”. In fact, Angelina’s hairy co-star in her new action thriller Salt is an enormous pet spider that she is entirely comfortable with.

Angelina Jolie knows just one great fear. It keeps her up at night—the idea of losing her loved ones, actor Brad Pitt and their shared brood of six little children. Otherwise, the actress admits, she isn’t smart about her personal safety and is an adrenaline junkie. You believe it after sampling Salt, releasing worldwide this week. In it, she plays CIA agent Evelyn Salt, accused of being a Russian spy. And so we see the star plunge down elevator shafts, leap off bridges onto speeding trucks and freefall off a helicopter.

Did she jump around a lot as a child? Half-laughingly she says, “I was that child and now I have that child. Pax (6) and Shiloh (4) are like that. Now I know the pain my mother went through.”

Angelina reveals that she takes care of her adrenaline itch by going off on motorbike rides with Brad, flying their plane (a four-seater Cirrus SR22 aircraft) or travelling. “Our greatest adventure is our kids,” she murmurs.

Up close, Angelina is mellow, warm and yes, extremely pretty, despite her impossibly thin, stick-like arms. She rests her hands on the table as she talks and her low voice dips so softly at points that you have to lean a little closer to catch the words. So there are at least two Angelinas—a gentle one who enjoys her title of ‘Earth Mother’, being pregnant and raising kids. The other one gets a huge kick of trying out every stunt in the book, while her double lazily smokes a cigarette on the fringes of the film set.

When the action-packed role of Evelyn Salt was first offered to Angelina, she discussed it at night with Brad. “He was supportive. I had just had Vivi and Knox (their two-year-old twins) and I was sitting in my nightgown in bed feeling very girly, very soft. I sat with it (the script of Salt) on the bed and I said, ‘I think I found something that will help me get fired up and physical again.’ I hadn’t worked for over a year because I’d been pregnant, and so Brad was happy for me. We met doing this style of film (Mr & Mrs Smith, in 2005), and he knows it’s fun for me.”

Salt was famously first offered to Tom Cruise, who turned down the role because he felt it was too much like his character Ethan Hunt in Mission Impossible.

Angelina confesses that she’s always been fascinated by James Bond and sees Salt as her go at the genre. Director Philip Noyce says that once Angelina entered the picture, things got more interesting. “How much more fun is it to see, you know, arguably one of the most beautiful women in the world demolish 50 tough guys?” asks Philip. The 60-year-old Australian director last worked with Angelina in The Bone Collector in 1999 and he remembers an actress who was never nervous, but one who was finding her feet back then. A decade later, she’s a massive star. “She’s matured beyond anything I ever imagined, despite a complexed personal life,” he says.

Hollywood’s highest-paid actress wasn’t always this content. Angelina jumped fearlessly into her previous two marriages and bi-sexual affairs, while stories raged on about her affinity to knives, vials of blood and tattoos. The star was also long estranged from her father, actor Jon Voight, but earlier this year, the two reconciled. Angelina says she most resembles her daughter Shiloh, except for the darkness that often surrounded her growing up years. “When I was in my teens, I didn’t know how I fit,” she says, her eyes lowered, searching for the right words. “Was I useful at all? I didn’t know how to answer that question. But once I travelled, I saw other people suffering and was ashamed for the sadness I felt for myself.”

If her humanitarian work and adopting children helped her find herself, Angelina’s relationship with Brad has helped her with personal happiness. The two have faced endless speculation ever since Angelina was seen as the woman who split up the Brad-Jen golden couple.

Dubbed ‘Brangelina’ by the media, their family has grown to the adopted Maddox (8), Pax, Zahara (5), and biological kids Shiloh and twins Knox and Vivienne. In February this year, the couple sued a British tabloid that printed rumours of their splitting up. Meanwhile, they work in turns so one can stay with the kids—Angelina has been shooting in Venice for The Tourist with Johnny Depp, while Brad took around their motley bunch to museums and crab fishing.

The star plays down the rumours of her quitting acting for good, sparked off by a recent interview she gave to the latest issue of Vanity Fair. “I’m not 20. At some point, I’m gonna want to do other things with my life,” she says and shrugs, “But I love acting and I don’t plan to quit. I just think that it will be less of a priority in the next few years.” For now, Angelina is reprising her ‘role’ as the animated character of Tigress in the sequel to the giant hit Kung-Fu Panda. Yet you can most sense her excitement at the idea of playing Cleopatra, a role that has been offered to the actress while the script is still being developed. “I can never be as lovely as Elizabeth Taylor (who played the Egyptian queen in the 1963 film Antony and Cleopatra), but I’d like to get to a different truth. Cleopatra was very misunderstood. You think she’s all about the glamour, but she was a strong woman, a mother, a leader who spoke five languages, an intellect. Even this idea of her having many lovers… it’s possible that there were just two,” she says.

It’s evident that Angelina revels in playing strong female leads, whether it is Marianne Pearl in A Mighty Heart, Christine Collins in The Changeling or the video game adventurer Lara Croft. Who are her female role models? “I had a very strong mother. Her name was Marcheline (Bertrand) and she would call herself Marshmallow. She was the softest person. She could never swear; she couldn’t yell at me without laughing. She had such faith and integrity that she was unbreakable. Kind and nurturing… she was an extraordinary person,” says Angelina, and you glimpse that she still misses her mother who she lost to ovarian cancer in 2007. The star grieved long over her and she says today that her wound will never heal. “Somebody gave great advice to me, ‘You will never get over that pain and you will never want to.’”

And what of strong men? When you ask her what kind of man she appreciates, she says demuringly, “I like everything that Brad is. You know Brad.” Er no, I don’t actually, not in the way you do. For the first time, Angelina blushes, laughs and says, “He’s a gentleman and a man’s man. He’s a wonderful balance of an extraordinary, loving  father, intelligent, and physically, he’s a real man.” Got the point. Loud and clear.