Global pessimism is both unfounded and unhelpful 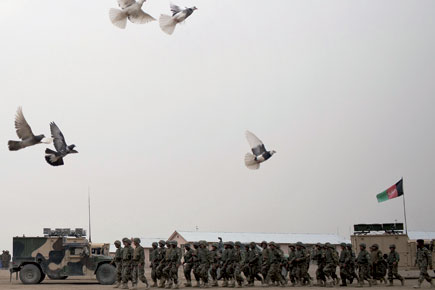 Global pessimism is both unfounded and unhelpful


Just about a year is left before the next presidential election takes place in Afghanistan. It will be the third such election and Afghans will vote for a new president about six months ahead of the scheduled departure of NATO troops stationed in the country for the past 12 years.

Incumbent President Hamid Karzai will not be able to contest the election, as the Afghan constitution—like many others in the world—does not allow a president a third term in office. Speculation about the country’s next head of state has reached a feverish pitch in Kabul not just among locals but also in diplomatic circles of countries engaged in the ‘Afghanistan Project’. Yet, one cannot help but overhear more discussions on the vexed issue of what would happen to the country after NATO troops are drawn down at the end of 2014.

If one talks to foreign diplomats and aid agency officials, one gets a picture of doom. Their predictions range from the Taliban marching into Kabul soon after foreign troops depart to an all-out civil war and a rapid descent into anarchy. But are Afghans as pessimistic as these foreigners? In my experience of the country of more than a decade, I have realised that ordinary Afghans, the people who would be at the receiving end should anarchy break out, are not quite so gloomy about the future of their country. There are 30 million of them, but their opinions are neither reflected in global media coverage nor taken into account by analysts who formulate policies for various actor states, thus lending dubious credence to doomsday scenarios.

Here, I am tempted to borrow and tweak the title of P Sainath’s book Everybody Loves a Good Drought to pose this question: why does everybody love an unstable Afghanistan? Whose interests will it serve should the country come apart the way it did after the collapse of its communist government in the early 1990s? Except for the Taliban and some elements of the Pakistani establishment, it would seem that nobody wants an unstable Afghanistan post-2014.

So why make predictions that demoralise the Afghan populace? Are their prospects so grim that national chaos is the only possible outcome of a NATO withdrawal?

A forensic look at Afghanistan’s ground reality would help assess if it is possible at all for the Taliban or other insurgent groups to capture the government in Kabul with military might. Also, we need to revisit the historical backdrop against which the Taliban took over the country in 1996.

After the Soviet withdrawal of forces from Afghanistan in 1989, Mujahideen groups backed by the US and Pakistan then thought they would easily be able to overthrow Dr Najibullah’s government. In March that year, about a month after the last Soviet troops left, they launched an attack on the eastern city of Jalalabad and occupied its airport and some areas around town. But the Afghan army under Dr Najibullah’s government fought back resolutely with the support of a far superior air force and crushed the Mujahideen offensive within two months—despite the latter’s ample supplies of weaponry from the US via Pakistan.

Today, with NATO promising to assist the Afghan National Army (ANA) with funds and equipment for another ten years (until 2024), one need not hesitate to assume that the ANA has the teeth to fight the Taliban or other insurgent groups. Besides, the US is not going to withdraw lock, stock and barrel. It is in negotiations with Kabul for a long-term strategic partnership (euphemism for a few permanent bases), and so a large number of US combat troops will stay stationed in the country. No one knows exactly how many, but figures ranging between 15,000 and 30,000 are in circulation in Kabul. Many sceptics say these bases are meant to encircle Iran rather than provide assistance to the ANA, since US soldiers will be confined to their bases and not take part in any operations. But still, their sheer presence would tilt the military balance in favour of the government.

The next question that comes up is how powerful and well-equipped the Taliban are as a military force. On this, the general consensus is that they have an ability to strike spectacularly with explosives through suicide missions or roadside bombs, but are not equipped enough to take on the ANA head on. They are not only fewer in number than the Mujahideen forces that launched the 1989 attack on Jalalabad, they also lack supply lines and backers. Pakistan may have retained covert links with the Taliban, but it cannot supply them with heavy arms and equipment any longer because the whole world—and the US in particular—will be watching.

In other words, the probability of the Taliban winning direct battles the way they did in the mid-90s is very low. Yes, they could carry out guerilla style attacks and even dramatic suicide bombings, but they are in no position to storm any major city, let alone Kabul.

One must also take into account the nightmarish experience of ordinary citizens in the 1990s when various Mujahideen groups started a civil war after the collapse of Dr Najibullah’s government. The country was devastated by this war that raged between 1992 and 1996. Hostilities were split bitterly along ethnic lines and there was no semblance of governance, even as forces of all Mujahideen factions tortured and killed tens of thousands of civilians, looted their property and raped women and children. Given the mayhem, when the Taliban took power in 1996 on the promise of dispensing justice, the country’s traumatised people heaved a collective sigh of relief.

Popular support for the Taliban did not last long. As they tightened their grip, Afghans sought freedom from the brutality of their medievalist interpretation of Islamic justice. My interactions with Afghans make one thing clear: they loathe the Taliban and do not want them back.

As a regular traveller to Afghanistan, I am amazed by the return of the usual hustle-bustle of Afghan cities. In the past decade, these cities have been largely rebuilt from rubble; civic amenities operate at acceptable levels; businesses are thriving; people have invested in property; and tens of thousands of young men and women attend colleges and universities for higher education. They still shudder at the memory of the civil war and Taliban regime. They do not want to see a repeat of those days. They yearn for the dividends of peace.

So what explains the doomsday predictions for Afghanistan that enjoy so much currency across the world? Who benefits from such talk? Certainly not Afghan democrats.

Afghans, one often hears people say, have never lost a war. But some also add that this is because they always switch to the winning side. If the objective is to keep Islamist militants out, the international backers of the current set-up need to demonstrate that the government in Kabul is the winning side. Perhaps that will get even the Taliban to switch over.