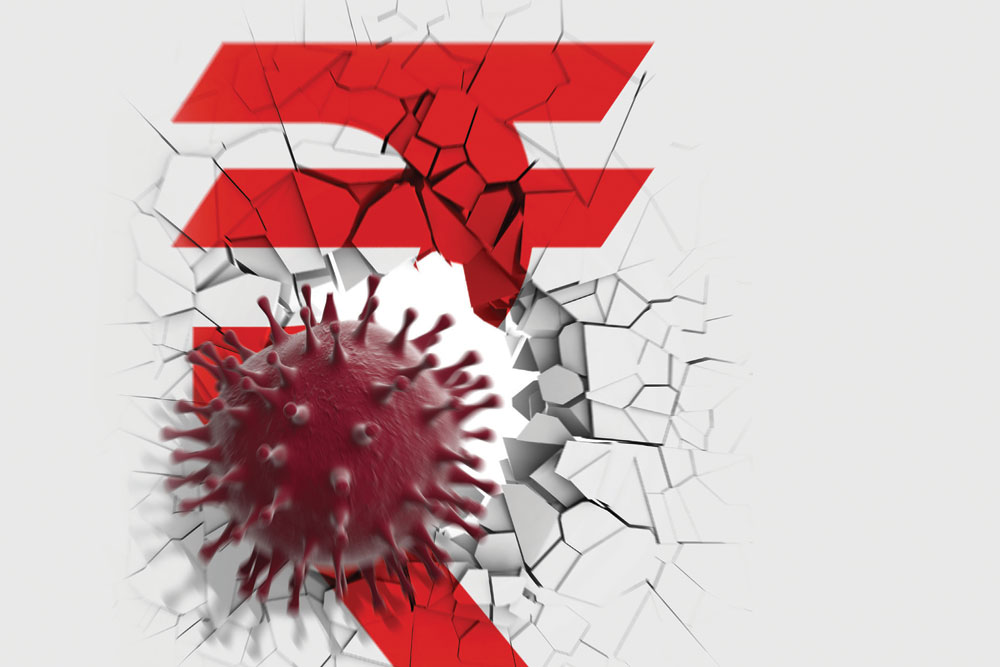 
When Prime Minister Narendra Modi announced a three-week, countrywide lockdown on March 24th, the action was in many ways an expected one. Within no time, the number of coronavirus cases in India had zoomed from a handful to more than 1,250. A total lockdown seems a drastic remedy but the case of countries like Italy that did not pay heed, is a reminder of the disaster that awaits a country for not taking precautions.

The Government’s management so far has been held as a model of handling the crisis. The question now, as the country goes into lockdown mode, is one of the economic costs of the crisis. With every passing day, the forecasts are turning grim. The simplest, and admittedly, crude calculation is that it will shave off a month’s output from the Indian economy. The second advance estimates for India’s Gross Domestic Product (GDP), released in February, pegged real GDP at Rs 146.8 lakh crore in 2019-20. The growth rate was estimated at 5 per cent for the year compared to 6.1 per cent in 2018-19. Taking away a month’s output leaves India poorer by roughly Rs 12 lakh crore.

This type of calculation is, however, misleading in many ways. It assumes that the moment the lockdown ends, the economy will whirr away like a machine within no time. The reality is that India is largely an informal economy where the workforce disperses when production halts. These workers spend what they earn. Another characteristic of this force is that it is made up of workers who have migrated from rural to urban areas and from small towns to large cities. A prolonged shutdown means this workforce has to disperse. That process is already on: the long queues of labourers on Delhi’s outskirts heading back home to states like Uttar Pradesh (UP) and Bihar shows this clearly.

The trouble for the economy is that these workers are also net consumers who lie at its base, fuelling the growth of the consumer goods industry. The result of a sudden stop to check the spread of coronavirus will be the Indian economy coming to a grinding halt in no time. The severe contraction of demand and supply will have taken a toll, unless the Government spends its way out of the crisis.

Estimates of the ‘hit’ to the Indian economy vary but are grim. UBS, a global financial services firm, estimates India’s real GDP growth forecast at 4 per cent for 2020-21. The June quarter growth is estimated to see a severe slowdown to 2.5 per cent from the estimated 4 per cent in the March quarter. The ratings agency CRISIL has similarly slashed India’s growth estimate to 5.2 per cent in fiscal 2021. There are other economists who estimate that roughly 60 per cent of GDP will be significantly hit due to the crisis. It is not uncommon to see assessments that shave off 2-3 percentage points from India’s output this fiscal. This leaves India in a very tough economic condition in the year ahead.

In the Budget this year, the fiscal deficit was pegged at 3.5 per cent of GDP. At the very minimum, the Government should be prepared to spend an additional 3.5 per cent of GDP. There is no other way to keep the economy afloat. For one, this money will be necessary to fund direct income support to the huge mass of people who will have no income and wages in the coming months. For another, money is also required to support key sectors of the economy so that they do not sink due to the collapse of demand.

Some states are already doing what is necessary. The Kerala government has announced a Rs 20,000 crore support package to help its economy. The UP government has outlined support of Rs 1,000 to an estimated 150,000 daily wage earners and another 200,000 construction workers per month. Similarly, the Maharashtra government has launched a plan to provide Rs 1,500 per worker along with a food package. In Delhi, Chief Minister Arvind Kejriwal said all construction workers whose livelihood has been affected will be given Rs 5,000. Over and above these measures, it is necessary for the Union Government to inject cash directly into the Jan Dhan accounts to mitigate distress.

These are sums that are low by developed country standards. But India, with its limited resources, has to do with what it can spare for immediate relief. There are, however, other options that are available as well. At the moment, the Food Corporation of India has a stock of 58.4 million metric tonnes of rice and wheat. These stocks should be released quickly to workers as part of an aid package. Along with this, the Government should step up spending under the Mahatma Gandhi National Rural Employment Guarantee Scheme during the period of hardship.

What is of paramount importance, however, is the careful designing and quick implementation of an economy-wide rescue package. In his last speech, the Prime Minister mentioned the setting up of an economic taskforce. It is imperative that this taskforce releases its recommendations fast and the Government takes speedy action on them.

INDIA IS NOT alone in the corner of distressed economies. Within a week of the crisis hitting American shores, estimates pegged the second quarter growth in the US to fall by 24 per cent, far above the historic fall of 10 per cent in 1958. That’s not all: unemployment rate is expected to zoom to 9 per cent. In recent weeks, claims for unemployment benefits have gone up significantly. In Germany, the powerhouse of the European economy, the GDP is expected to contract by a whopping 5 per cent in 2020, well above what was seen during the economic crisis of 2008. These data points only highlight what is conventional wisdom by now: the global economy is deeply distressed.

If economic distress is one part of the story, the political consequences that flow out of them are another matter. Historically, when crisis of the kind being seen now emerge, the political effects are equally momentous. The last such depression, dating to the crash of 1929, paved the road to the Second World War. Protectionism rose, trade collapsed and the world collectively landed in a disaster. It is not necessary that the same history will be repeated. If anything, a political correction with respect to globalisation was long overdue.

Soon after the viral outbreak spread across the world, analysts began speculating that globalisation—the process of lowered trade and investment barriers and large flows of people—may come to an end once the pandemic subsides. To be sure, such prophecies of doom are premature. The after-effects of the pandemic will be fully known only towards the second-half of the year. But some political trends, such as the revival of nationalism across the world and slowing down of globalisation, are likely to accelerate. They first emerged more than a decade ago after the global economic crisis of 2008.

The reasons for their acceleration at this time are clear and three factors are starkly visible. The first being the abject failure of global institutions to tackle the spread of the coronavirus. The World Health Organization (WHO), the sentinel of the global health surveillance and early warning system, failed abjectly this time. Its director general, Tedros Adhanom Ghebreyesus, was busy praising the Chinese government well after the viral outbreak had spread across the globe. The WHO, as late as mid-January, much after Wuhan was locked down, continued to underplay the threat from the virus. Strangely, the United Nations (UN), the first organisation to intervene in most global crises, has been missing in action in the last three months since the crisis broke out. No one talks about the UN and nor does anyone expect any other global governance organisation to help countries in any way. The idea that countries need a supranational set of institutions to manage and find solutions to crises like global warming and pandemics is now very weak.

Second, the most important managers of the pandemic have turned out to be national governments that have coordinated the response to the outbreak. From managing healthcare systems on an emergency basis to securing essential medical supplies, national governments have shouldered the burden that was once on the shoulders of private companies, global supply chains and individuals. If there is one lesson that is being learnt the hard way, it is the importance of relocating supply chains for vital equipment and medicines within national borders. There is little doubt that globalisation permitted phenomenal economies of scale that allowed prices of equipment like ventilators and medicines to come down drastically. But most of these chains were located in China. Once the crisis emerged, the Chinese government’s first priority was to commandeer these goods for local use. Most countries wanting supplies from China have been forced to source them elsewhere or have had to pay much higher prices while purchasing them from China. The lesson in one respect is similar to what the Southeast Asian countries imbibed after the global financial crisis in 1997: keep a chest of foreign currency to tide over a tough time instead of relying on multilateral institutions like the International Monetary Fund.

Third, countries may be loath to give up the benefits of globalisation—especially global trade—that have enabled them to grow and overcome poverty but they may not have that option. After the crisis is over, the world may be simply too battered and economically weak to pursue trade at the pre-viral outbreak level. That single factor may end up localising production. This will be over and above the protectionist tendencies that had crept in after the recent rounds of trade wars led by the US. When the epidemic is over, the US may no longer be available as the ‘buyer of last resort’ to the world, a role it has played since the end of the Second World War. In the absence of such a country, world trade will be uncertain.

Can China be a replacement for the US? The coronavirus crisis has shown this is not possible. American power rested on its ability to provide global public goods like security, freedom of seas for trade and navigation and a host of other items. China, in contrast, provides none of them. It is a net security threat. From the shores of the Pacific to the Indian Ocean region, countries are wary of it. It has demarked the entire South China Sea as its exclusive waters, something no country has ever done in history with respect to an oceanic zone. Finally, even when it offers ‘help’, it does so with political strings attached to it. It wants the world to buy its version of 5G technology from a company that is suspected of close ties with the Chinese military. The country also brooks no criticism of its policies. Even at the height of its power in the 1970s and ’80s, the US never imposed such conditions on any country receiving help or aid from it. If globalisation weakens in the months and years ahead, it will be in no small measure due to China.

Once the dust settles down, the world will be a poorer place. The economic cost will be exceptionally high and recovery may take a very long time. Return to a fully repaired system may not even take place. This leaves countries like India with some advantages, and some disadvantages. Probably for some time, the Government will have to resort to extreme Keynesian policies of continuous fiscal stimulus and handholding the economy. This will not be easy. In a time of crisis, these usual economic parameters can be kept aside but they cannot be discarded permanently. 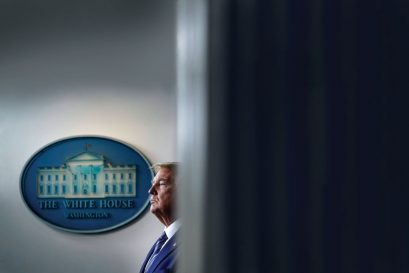 The pandemic is dangerously exacerbating the deep political divisions in America 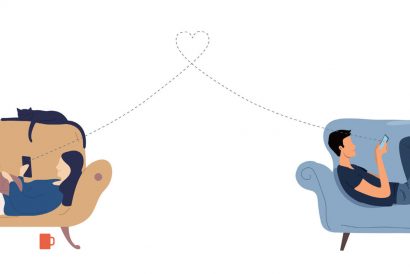 A little bit of high-tech, a lot of old-fashioned waiting. That’s how romance is unfolding in the age of Covid-19 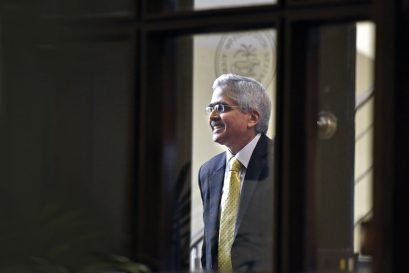