They turn 20 in 2020. The ideas and aspirations of a generation 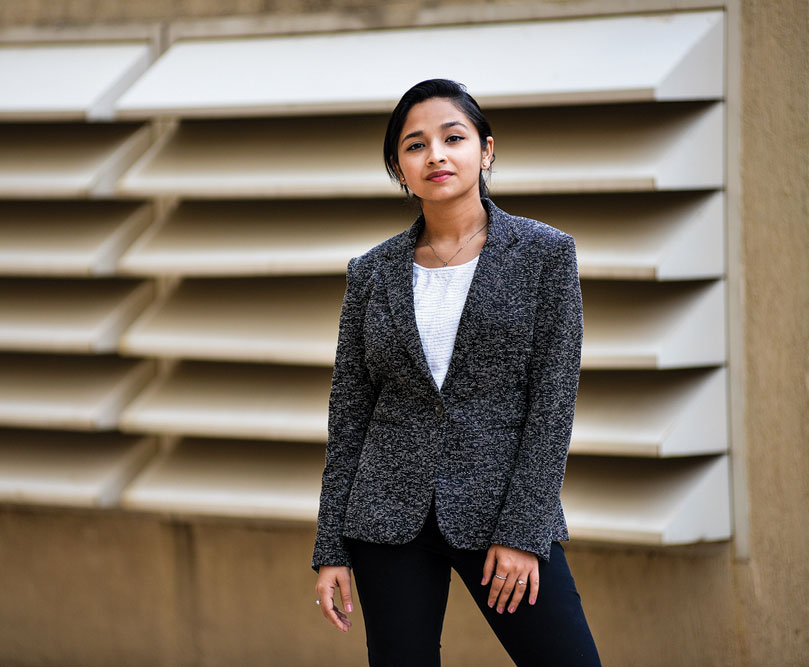 
AT THE DAWN of 21st century, if the world was a stage, India was a shy, new entrant, standing on the sidelines. As the first two decades of the new century close, it has come a long way from the insularity that characterised the country since Independence. As India’s economy has grown, both soft power and diplomacy have become its calling cards. India is one of the youngest nations in the world today. About one in every two Indians is less than 25 years old. The country is also emerging as one of the top nations for startups. Open spoke to five young Indians—all of whom will be 20 in 2020—whose personal journeys reflect the country’s in the new century

TWO YEARS AGO, at the age of 17, Sanjana Dipu did not know if she really wanted to go to her school farewell. “All my friends were going to be in sarees and had long hair. I, on the other hand, had short, cropped hair, my nails were not done, I had recently lost a lot of weight, so I just wasn’t sure.” But then in a way, Dipu had almost asked for this. When Dangal had released in 2016, Dipu, who had always aspired to be an actor, told her parents that even she would chop off her hair for a role like that of Zaira Wasim. When she was cast to play Mulla, a 13-year-boy in Moothon (2019), that was exactly what was required of her, apart from an entire physical change, and Dipu more than willingly embraced the opportunity. “My father knew the director of the film, Geetu Mohandas, and one night, after a chance meeting, she called me for an audition.” Dipu, an avid consumer of cinema, both popular and niche, knew that the script of Moothon and the role of Mulla were something that would resonate with an intelligent viewer and the critical response—to both the film and her performance—has been exhilarating. “I feel so lucky to be an actor at this point of time when there is so much exciting content being created in the country. The stories that are being told now are more reflective of the situations around us and there is subtlety in the storytelling. The audience has also evolved tremendously, people are not just open to new things but they want out-of-the-box storytelling. All of this has taken place over the last two decades as content has evolved from 9 PM slots to streaming platforms.”


“Be it genres or stories, there is so much explosion of content in India today, with such evolution in storytelling. It’s a very exciting time to be an actor”

Dipu should know, since she herself is one of those consumers who likes to juggle her viewing between documentaries, series and movies. It is, she says, a great time to be a young actor with potential who does not want to be helmed in by any genre or format. But before Dipu can continue working on making her childhood dream a reality, there is another commitment: to her college education. A second-year student at Bangalore’s Kristu Jayanti College, she wants to get her Bachelor’s degree first before heading for the arc lights.

RADHIKA JOSHI KNOWS the power of a true story. After all, it was a tragedy in her family that led her to forming The Second Chance Project that raises awareness about organ donation in India. “I lost a family member to kidney failure and research on organ donation in India threw up startling facts,” she tells Open. India has among the lowest donation rates in the world at 0.5 per million. “Every year, on an average 500,000 people die because they are unable to get an organ transplant. This statistic has to improve.” The reasons, when Joshi started her research, were numerous ranging from religious beliefs to fears of organ trafficking and lack of information. She got in touch with an NGO which helped her organise awareness sessions in schools and colleges. “Youngsters, my peers, are much more receptive than older generations to the idea of organ donation. And it is through them that we can get to parents and elders. We are such a young country and we need to use our voice to bring about a change.”

Joshi’s style of advocacy involves everything from PowerPoint presentations to street plays to interactive sessions where Joshi and her team show up in classrooms in aprons that have organs drawn on them. “When I had just started contemplating this cause, I was met with a brick-wall of resistance, ‘Why do you want to do this? Sure, there are other causes?’ I feel it is because of the connotation of death but organ donation can be a very positive experience,” says the final-year BA student at Sophia College, Mumbai. Right now, The Second Chance Project is active in Mumbai and Joshi’s hometown of Dehradun but she wants to scale it up to other cities and smaller towns. As she prepares to graduate in May, Joshi is hoping that 2020 will mark the beginnings of a positive change. “Youngsters today understand the importance of giving back and [my project] will remain a work in progress.” 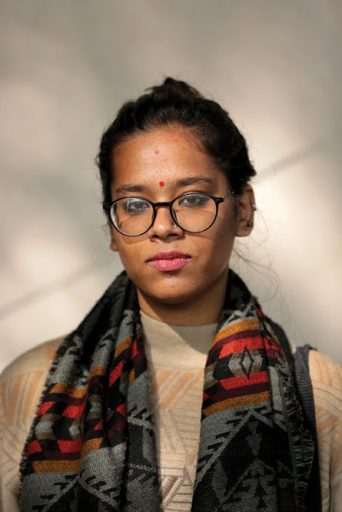 WELL-BEHAVED WOMEN rarely make history. Akhtarista Ansari understands that only too well. Along with her four friends, she shot to national prominence after a video of them protecting a male student from lathi-wielding Delhi policemen, all the while wagging an indignant finger in their faces, went viral a few weeks ago. Images of her friend Ayesha Renna standing up to the policemen while the other four—Ladeeda Farzana, Chanda Yadav, Tasneem and Ansari—provided cover became the symbol of the anti-Citizenship (Amendment) Act protests earlier this month. “I study the theories of Marx and Lenin not just to do well in exams but to apply them in real life. If students won’t fight for rights, who will? Women students in particular have to stand up for themselves.”

“If students won’t fight for rights, then who will? Women students in particular need to stand up”

Ansari came to Delhi as an impressionable 14-year-old from Jharkhand because her parents wanted her to study in Jamia. She refers to the university as home, an institution that has shaped her. Ansari turned 20 in the last week of December and laughs a little when asked about the parallels between her life and the first two decades of the 21st century. “Before the 15th of December, I always used to say that I have never seen a riot in my entire life. I can’t say that anymore,” she says, with a shrug. But she has no intention of leaving or being scared. “This is where we are, this is where you will find us. We are Indians and this is a fight for our rights.”

THE MATSYA VADH STORY from the Mahabharata—in which Pandav prince Arjun wins an archery competition for marriage to Draupadi in the first shot because he is so focused that he could see nothing except the eye of the fish, the target—has long been an inspiration for Deepak Punia, who ended India’s 18-year-drought by winning a gold at the Junior World Wrestling Championship in Estonia earlier this year. Right now the soft-spoken wrestler from Haryana who competes in the freestyle 86-kg category has only one mission: an Olympic medal at the Tokyo games in 2020. “We have not had a wrestling gold till now. This year, four of us have qualified and I feel we all have a good chance.”

“India has won a lot of respect in wrestling worldwide but never an Olympic gold. I want to change that in 2020”

Wrestling is a way of life in Punia’s village Chara in Haryana but for him it became a passion after Sushil Kumar’s bronze in the 2008 Beijing Olympics. “Isme izzat hai—meri bhi, desh ki bhi (this has respect—for both me and the country),” he says. Since Kumar’s win, wrestling as a sport has gained prestige in India. For Punia, everything from training facilities to the expert help he now has at hand, be it for coaching or motivation, have been made possible by the victories in the past two decades. For now, he is spending his time prepping for his tryst with destiny on August 5th and 6th when he will take to the ring in Tokyo. “For me, 2020 is going to be all about the Olympic gold and ensuring that the dream comes true. That will be my gift to my fraternity and to the country.”

AS A YOUNG BOY growing up in a small village in Uttar Pradesh, Akash Singh didn’t know where to take his innovative ideas. Winning science fairs at the school level wasn’t enough for him: he wanted more and he wanted it at a bigger scale. “I moved to Gurgaon after Class 10th to pursue a diploma in engineering but the itch to create something was just too big,” says the 20-year-old who now has his own company, Energinee Solutions.

“In India we need to stop pushing our children to just be engineers and doctors. We need to encourage out-of -the-box thinking ”

Singh’s work, which includes a power-generating walking stick and a smart irrigation sprinkler, has been praised by the Ministry of Micro, Small and Medium Enterprise. For Singh, his journey as an innovator and entrepreneur really began when he saw a thriving lake in Manesar, Haryana, all but die owing to temple waste being thrown into it. “We started by placing containers to collect all the ash from incense sticks in one temple. Today, we recycle waste in several temples across Gurgaon, Ghaziabad, Noida, Greater Noida and Delhi and make ecofriendly statues out of them. Next on the map is Varanasi and Mathura,” Singh says. This is however just one part of what Energinee does. Two years ago, Singh was invited to conduct a digital literacy workshop for inmates at Gautam Budh District Jail in Uttar Pradesh, an offer, he says, he took up reluctantly. “But today we run an Energinee Innovation Centre in the prison where inmates make all our handicrafts and we even offer them employment opportunities on their release.” The change in attitude, he says, came about when he started reading up on the overcrowded conditions of Indian prisons and how undertrials can spend years inside before they even get a chance to have their case heard. Singh’s family wanted him to be an engineer. Today, he already has his own company with 22 employees, “all under the age of 25”. After he recently secured funding from an international investor, his family has started coming around to the idea of their son being an entrepreneur. “In our country, parents only have one or two expectations from a child: to be either an engineer or a doctor. No one pushes children to learn, to observe things around them and think out of the box. This needs to change.” Singh passed up an opportunity to move to a firm’s research department in Japan because he wanted to stay in India. “India is brimming with talent which is keen to explore solutions for very basic problems which continue to hamper our lives. Already, there are ventures on the ground that seek to make lives better for everyone around us. We have aspirations of being a superpower and we need to harness the dreams and aspirations of innovators to make that dream a reality,” he says.