There is little for secularists to cheer 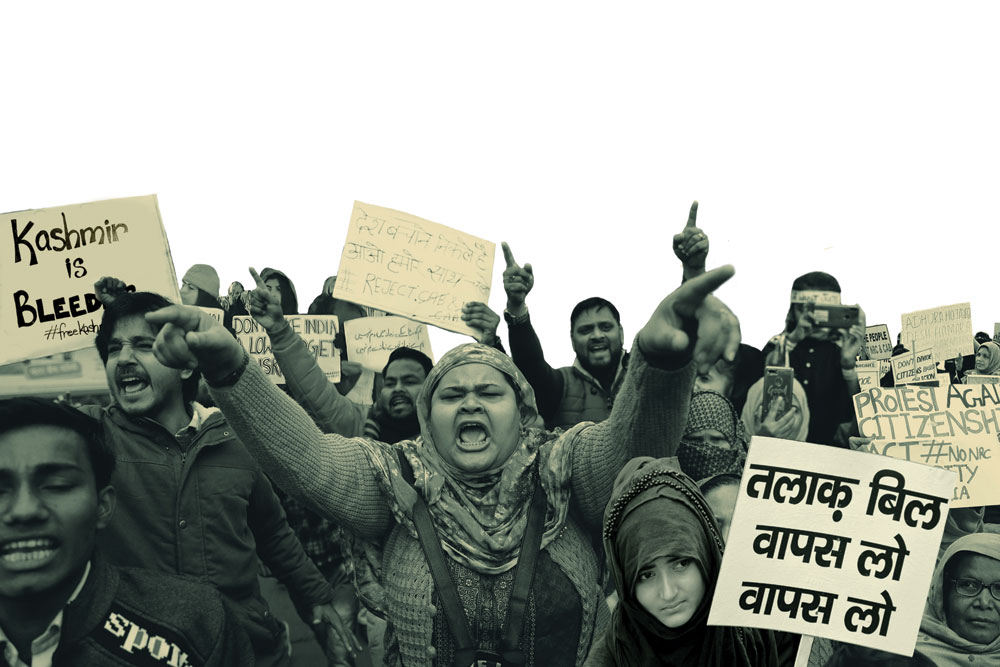 
An alarmist and ill-informed ‘voter disenfranchisement’ charge has become the defining slogan of the anti-Narendra Modi forces since the moment the Citizenship (Amendment) Bill, 2019 got the assent of Parliament. The opposition threatened to hit the streets claiming that the law was sculpted from the Hindutva idea of nationhood. Protests were triggered, mainly in pockets dominated by the Muslim community. Two universities—Jamia Millia Islamia in Delhi and the Aligarh Muslim University— became the fulcrum of the protests.

The Citizenship (Amendment) Act, 2019 (CAA) was the culmination of a two-decade-old campaign by the Bharatiya Janata Party (BJP) to shelter persecuted minorities from India’s neighbouring, and predominantly Islamic, states. Few can contest the evidence on how religious minorities have been harassed, forcibly converted and/or driven out of Pakistan, Bangladesh and Afghanistan. Political parties of all hues had, on various occasions, promised help to these victims but failed to deliver on their commitments.

That, however, did not prevent the student protests at Jamia Millia from turning violent, forcing the authorities to evict them from campus. Subsequently, protesters began assembling at nearby Shaheen Bagh was hyped by the media as the new dateline of resistance. The student movement was then taken over by community members and women became the face of resistance. Among those paraded was a 90-year-old lady who could barely understand the goings-on, a nursing mother cradling a four-month-old baby, a 10-yr-old singing to keep up the spirits of those at the sit-in. #ShaheenBagh #ShaheenBaghProtests and similar trends went viral on social media, celebrating the gutsy ‘ordinary women’ who had been anointed as torchbearers of dissent.

But something else was in the making too. The stage was being designed for the swift entry and takeover of the protests in Muslim-dominated enclaves across India (but more so, in northern states like Uttar Pradesh, Bihar and West Bengal) by hardline community voices, primed for leadership and for negotiating anew the terms of political and electoral rights based on identity.

Known Modi-baiters began to swarm at Shaheen Bagh. The capital’s apparent Arab Spring-in-a-teacup ended up exposing a pattern in the protests that broke out in minority-dominated pockets over the CAA. Most of these protests were burnished by members of the clergy, who then enlisted social and cultural icons to dub the Act as both discriminatory and anti-Muslim. Most critics who eagerly waded into the cesspool warned of a ‘grave threat’ to the essence of India, claiming that Modi was laying the foundations for a Hindu Rashtra.

Some even tried to grab the police detainees tag by breaking prohibitory orders issued for crowded parts of the metropolis. Demagogues from the clergy—leaders who seek support by appealing to the desires and prejudices of ordinary people rather than by using rational argument—took the baton of disorderly protests in Lucknow, Meerut, Bulandshahr, Ghaziabad, Moradabad, Mhow, Gulbarga and Mangaluru.

Pleaders for civility were being edged out of core-community debates in these protests. While the stone-pelting and petrol-bomb incidents were being dismissed as something that both sides perpetrated, the Central Government, the Prime Minister and Home Minister were being blamed for fear-mongering in the interests of a majoritarian state. Things were taking a decisive turn. Community leaders sought, crucially, to emphasise the religious overtones of the protest, with slogans like “Say it in the barricade/ la illaha illallah/ Say it in the tear gas/ la ilaha ilallah” on social media. Such community-oriented slogans triggered uneasiness and isolated the saner voices among those criticising the CAA.

Congress MP Shashi Tharoor took to Twitter to advise restraint: ‘Our fight against Hindutva extremism should give no comfort to Islamist extremism either. We who are raising our voice in the #CAA protests are fighting to defend an #InclusiveIndia. We will not allow pluralism & diversity to be supplanted by any kind of religious fundamentalism.’ The pushback was swift. Activist Shehla Rashid retorted on Twitter: ‘If you are embarrassed by Muslims’ cultural clarion calls, then you are not an ally. If you are ashamed of us, then you are part of the problem. If you are an ally, please understand that our religious and cultural rights are as non-negotiable as yours.’


In 1971, when India splintered Pakistan, there was an outburst in the Muslim streets of Northern India. Niazi, the Pathan General, surrendered to Jagjit Singh Arora, a Sikh; JFR Jacob, a Jew, was in charge of the operation; and the Indian Army was headed by Sam Manekshaw, a Parsi. Lucknow-based religious scholar Ali Miyan Nadvi told his Pakistani audience: “We cried when you lost.”

The anti-CAA protestors were clearly sending out signals that they would flex their religious muscle in consonance with their political muscle. This was evident from the placards and slogans— these were mainly about the scrapping of Article 370, the ban on instant Triple Talaq and the division of Jammu and Kashmir. The Muslim community was no longer willing to indulge in tactical voting to help parties like the Congress and its allies but seemed to have come into its own as political actors with agency.
The aggressive voices keen on asserting a distinct Muslim identity and negotiating on their own terms had now come out of the shadows and begun dominating the protests. The protestors in Delhi were quick to co-opt Chandrashekhar ‘Ravan’ Azad of the Bhim Army. This was also an attempt to force the hands of Dalit community leaders like Mayawati and engineer a coalition of Dalits and minorities in a common cause. But Mayawati has kept her distance from the protests since a majority of those seeking citizenship under the CAA are Dalits, whose rights BR Ambedkar was keen to secure in the run-up to Partition.

What is happening in India has similarities with goings-on in the US and Europe. The Democrats traditionally do not have the support of a majority of White voters who dominate rural America. Their support has been largely restricted to the educated and privileged campuses and the Ivy League. This section has been striking alliances with new immigrants, whether Hispanics or Muslims, and projecting themselves as a broad and progressive coalition.

That is the fight within the Democratic Party. And it is a fight that could significantly shape US politics for some time to come. There will be pushback against it, too. If Donald Trump wins re-election, that process will be derailed and could even be stopped. But if, say, Elizabeth Warren wins, that process could well accelerate. Some among the ‘Squad’ have also turned up to support Senator Bernie Sanders and his avowed policies in favour of immigrants, minorities and students. Representatives like Rashida Tlaib and Ilhan Omar—ardent and unapologetic defenders of overt symbols of Islam—have even refused to condemn regressive practices like female genital mutilation, besides aggressively defending the hijab.

The rallying cry of the anti-CAA protestors in India continues to be “Say it in the tear gas/ la ilaha ilallah” and “Tera mera rishta kya? La ilaha ilallah”, similar to the slogans chanted by protesters in Iran and Kashmir when stone-pelters take over. Such slogans have been in use in Pakistan since the days of Zia-ul-Haq. Here too, the signals are becoming louder and clearer. The largest minority community in India is hardening its political position based on the community identity rather than a national identity.

The contours of the anti-CAA stir highlight the possibility that the time may have passed when coalitions could be carved out, as part of tactical alliances, among Muslims, Jats, Jatavs and Yadavs. The failure of the Dalit-OBC-Muslim coalitions as a means of increasing electoral and political heft was evident in the results of the last Assembly elections in Uttar Pradesh. Its shelf life now appears over.

The Muslim community’s assertion is nothing new. In 1971, when India splintered Pakistan after capturing Lt General AAK Niazi, the commander of the Pakistani troops in East Pakistan, there was an outburst in the Muslim streets of northern India. Indira Gandhi had made her political point that the individuals involved in the Pathan general’s surrender surrender were a Parsi, a Sikh and a Jew. Niazi surrendered to Lt General Jagjit Singh Aurora, a Sikh; Major General JFR Jacob, a Jew, was in charge of the operation; and the Indian Army was headed by Field Marshal Sam Manekshaw, a Parsi. Lucknow-based religious scholar Ali Miyan Nadvi went to the extent of telling his audience in Pakistan: “We cried when you lost.”

In his book Creating a New Medina, historian Venkat Dhulipala narrates the prehistory of Pakistan centred on the United Provinces (UP), one of the ‘Muslim minority’ provinces. UP Muslims offered energetic support to the idea of Pakistan, in embryonic form in the late 1930s, but with increasing articulation following the Lahore Resolution passed by the All-India Muslim League in March 1940. According to Dhulipala, Pakistan was to be a new Medina, patterned on the city in Saudi Arabia that became the seat of Prophet Muhammad’s new faith in the 7th century and the nucleus of his spreading community of believers. Dhulipala’s thesis is that, far from being insufficiently imagined, Pakistan was an idea abundantly articulated that became increasingly coherent and even undeniable.

The Muslim community’s anger against Indira Gandhi for the cleaving of Pakistan into two separate entities shattered the dream of a homeland governed, ruled and committed along the lines of the first five prophets. But this anger did not make any difference to Indira Gandhi’s political prospects. In the Assembly polls held after the war (she had won the Lok Sabha elections before the war), the Congress swept on the strength of her image as Ma Durga. In 1977, the community sided with the Janata Party and the Shahi Imam addressed a Ram Lila Maidan meeting. But the community wanted to teach the Congress a lesson and in 1980 it went with Charan Singh. In Uttar Pradesh, the Dalit Mazdoor Kisan Party made handsome gains in minority-dominated seats at the expense of the Congress.

In 1984, the Muslim vote had no impact as the General Election came on the back of the Indira Gandhi’s assassination. Again in 1989 their vote was split, although the community wanted to punish the Congress for its role in the unlocking of the Babri Masjid in Ayodhya and in the Bhagalpur riots. It backed VP Singh but extracted a price for it.

Going by the current indicators, the terms of political and electoral give-and-take by the Muslim electorate countrywide are set to be radically transformed for the coming elections.

The Muslim mood clearly shows that the community will only do business with parties ready to give it the biggest share of seats. This is a sign that should worry the ‘secular’ parties that have been hoping to keep Muslims on as their captive vote banks.