‘This is the time to bring change,’ says Sonu Sood 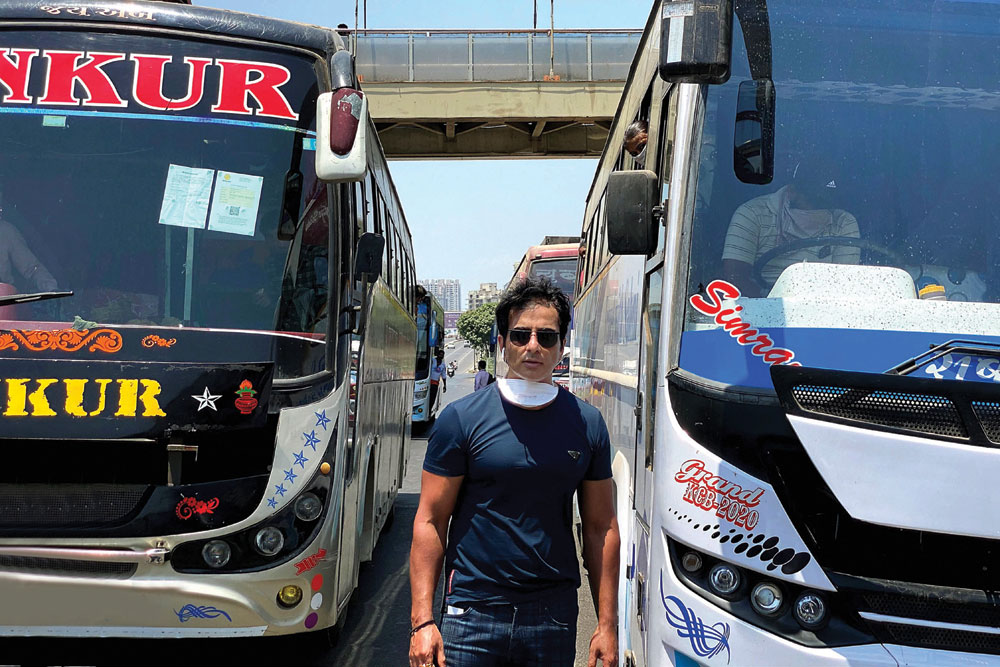 Sonu Sood sees off migrants leaving for home from Mumbai, May 24


SONU SOOD STILL remembers being summoned to Chennai around 1999, travelling by train and taken to meet director Bharathy who was making a Tamil film, Kallazhagar, starring Vijayakanth. “He greeted me, asked me to take off my T-shirt and bare my chest,” says Sood. The young man, who hails from Moga in Punjab and graduated from Yeshwantrao Chavan College of Engineeringin Nagpur, did so, sparking a decade of playing the handsome, physically fit evil guy in several Tamil and Telugu films. It took another decade before he would become a popular face in south Indian cinema, one for whom roles would be written. This happened in 2009 with Arundhati as he really seemed to thrive in playing the over-the-top character, Pasupathi, allowing him to show that he wasn’t just another Hindi-speaking actor brought in for his good looks. Arundhati, a mix of old-world horror and new-age special effects, started a trend of big-budget spectacles in Telugu cinema which saw the emergence of Baahubali and made a star of both lead actress Anushka Shetty and chief antagonist Sood.

It was his physicality that landed him the role of Cheddi Singh in Abhinav Kashyap’s Dabangg in 2010. As the good-bad police officer Chulbul Robin Hood Pandey, Salman Khan stormed back into reckoning, setting off a series of crowd-pleasing action-hero roles that made the last decade’s unrivalled superstar. Salman Khan’s logic is and was simple: the bad guy should be bigger than the hero, only then is it fun to beat him up. Sood fit the bill as the big baddie and the rest is movie history, even if some of it had to be censored, as in the iconic dialogue: ‘Hum tum mein itne chhed karenge ki confuse ho jaoge ki saans kahan se lein aur paade kahan se’ (I will make so many holes in you that you will be confused about which orifice to use for breathing and which for breaking wind).

But almost 10 years later, Sood is more than a punchline for a star, showing remarkable empathy and organisational skill, in helping almost 20,000 migrants (and counting) go back home. Along with his childhood friend Niti Goel, he first started in March, by distributing food. By now the duo have given out 45,000 food packets. Stirred by the thought that little children accompanying their parents on the long walk home would forever be scarred by the trauma, on May 11th, he decided he would find a way to transport them back home. Securing permissions from governments, organising food packets and water, he ensured the first batch of 350 migrants went back home from Karnataka. “Seeing the tears in the eyes and smiles on their faces was amazing,” he says, even as he is in the midst of requisitioning trains.

His efforts have won him plaudits from politicians, such as Odisha Chief Minister Naveen Patnaik and Punjab Chief Minister Amarinder Singh, and adulation from common people. Several friends have also come forward to sponsor the cost of the buses going home. When he was stricken by the plight of 169 girls from Kendrapara in Odisha who were stuck in a garments manufacturing factory in Kerala, he organised a flight for them, coordinating the boarding and the landing, with vehicles to drop every last person to their homes. The requests are pouring in—at 70,000 an hour when he last checked—but Sood says he will not rest until each and every migrant worker is home. It has cost him his sleep and made him a compulsive social media user, replying to almost every message and tweet personally, but he is not complaining. “I have always believed in channelising my energy in a positive way. A lot of people asked me to conduct fitness master classes on video but I am glad I abstained. This is so much more fulfilling. The lockdown should help people in soul-searching, in connecting to all the souls living in the house and with oneself.”

The rewards have been many. One mother naming her son ‘Sonu Sood’, another crying into the phone when she met her son who had gone to Mumbai to become an actor. His long-time friend Farah Khan, who directed him in Happy New Year (2014) as Jag Prakash, bomb-disposal expert and Shah Rukh Khan’s best buddy, is not surprised by his generosity. “He’s come up the hard way and has always been extremely helpful to others. I’m glad he is getting recognition but I keep telling him not to let it go to his head,” she says. Like many of his friends and associates, she too has been drafted into the process of helping others and is happy to help, whether it is organising water, food packets or helping with transport. Early in April, Sood had also offered his suburban hotel to frontline health workers for rest and recuperation.


Sonu Sood leads by example: waking up early, going to the gym, eating in such moderation that he usually carries his own lunchbox even to parties. A strict vegetarian and fitness fiend, the boy who grew up admiring Sylvester Stallone and Arnold Schwarzenegger has always been averse to living senselessly. ‘This is the time to bring change,’ he says

Sood says south Indian cinema is where he learnt his craft; soon he was looking not just to thrive on the ‘handsome evil guy’ straitjacket, showing off his sculpted chest whenever required, says entertainment editor Sudhir Srinivasan. He sought versatility too. You saw this in his choice of playing a friend-turned-foe in Super (2005), a mute henchman in Chandramukhi (2005), in the comic streak in his performance in Dookudu (2011). In Vijay Antony’s forthcoming film Thamezharasan he is said to be playing a police officer, coming full circle from terrorist to policeman—an indication that this is an actor never content with stereotype. He is showing the same thoughtfulness in choosing his Hindi film roles. Up next for him is the mammoth Prithviraj, to be directed by Chandraprakash Dwivedi for Yash Raj Films, and his own production, a biopic of badminton star PV Sindhu.

Those who have worked with him swear by his ethic. Sanjay Gupta cast him as a character based on Dawood Ibrahim in Shootout at Wadala (2013) and found him an absolute pleasure to work with. “He is a thorough professional. He was always on time, very well prepared and a superb co-actor for others. He fitted the character perfectly. I found my actor for the film and a very dear friend for life. He walks in when the world walks out,” he says.

Whether it is help with a corporator or a visit from his personal trainer for those he thinks are overweight, he is indeed a friend in need. He leads by example: waking up early, going to the gym, eating in such moderation that he usually carries his own lunchbox even to parties. A strict vegetarian and fitness fiend, the boy who grew up admiring Sylvester Stallone and Arnold Schwarzenegger has always been averse to living senselessly. “This is the time to bring change,” he says. “If every kitchen in every home cooks one extra meal, believe me, no one will ever go hungry in this country.”