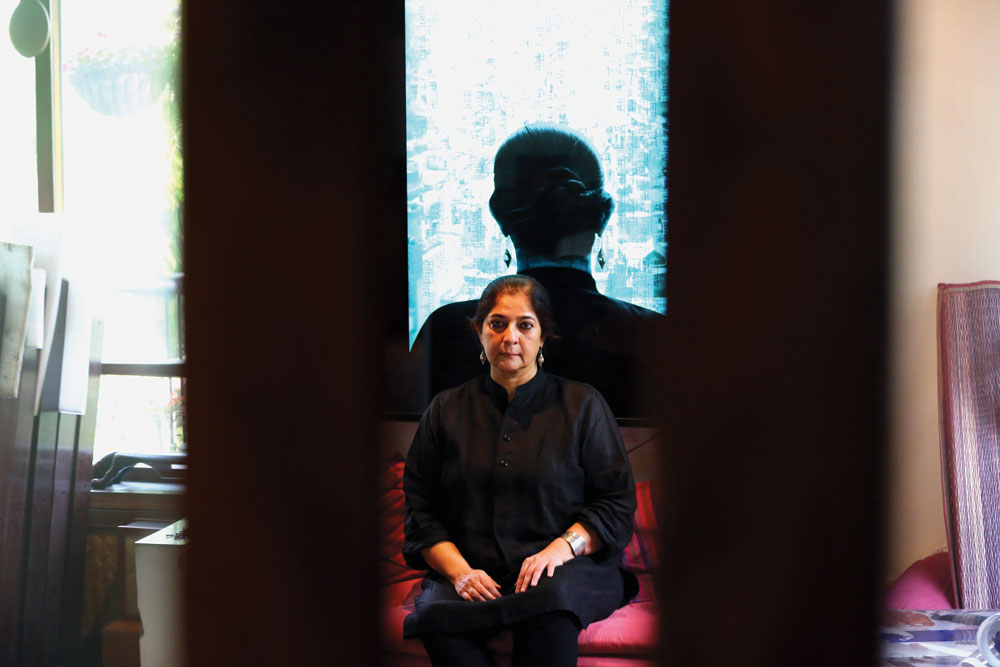 ‘ARC SILT DIVE’. THESE three verbs make up the rather enigmatic title of a fresh off-the-stands book featuring a selection of significant works by multimedia artist Sheba Chhachhi. ‘Arc’ indicates the journey and trajectories of the artist’s oeuvre, ‘silt’ signposts a sedimentation of ideas, while ‘dive’ is a plunge below the surface into undiscovered depths. “The book’s title is inspired by a set of movements and relationships of images and ideas. I invite the reader to make connections between things that at first seem disparate but as the book progresses, the associations make sense,” says Chhachhi, seated in her picturesque studio in Delhi’s leafy Defence Colony. “Translating the rich immersive experience of the multidimensional installations into flat images, prose text and verbal description was a challenge,” she says, recalling the process of making the book. Arc Silt Dive: The Works of Sheba Chhachhi (Tulika Books, 350 pages, Rs 4,975) is edited by Kumkum Sangari, with essays by Sangari, Gayatri Sinha and Nancy Adajania. The text that describes the works is written by Chhachhi.

Entering Chhachhi’s studio is like stepping into a page from her book, for it is a repository of her past and present works, where dialogues go back and forth between Persian miniatures and macabre satellite images of ecological disasters. Notably, the book does not follow a chronological mapping of her works. Rather, it ‘follows arcs of connectivity’—from photography to mixed media installations to sculpture.

Lying about the studio are large transparency sheets, printed with images of birds from the Subcontinent, modern cityscapes and references to ecology. These lie in waiting to be mounted into light boxes, some of which are even animated with slowly moving images. Chhachhi’s multimedia works contrast her early clay sculptures, of fierce female heads, which echo her Wild Mothers series of 1999 and some poetic drawings of female forms. Every available space in her studio is crammed with topics that range from medical cures in the tropics to catalogues of other contemporary artists, and various books on Persian, Mughal and Rajasthani miniatures. The terrace studio opens out into a large garden that thrives under Chhachhi’s watchful gaze as she contemplates her next artwork, research project or just savours her mint tea.

Chhachhi lays out the book on a chair, since it is best viewed when placed on a stand. It was mounted on a prayer-book stand, at the well-attended launch that was held at the KHOJ artist residency and café in Delhi’s bustling Khirki village. Chhachhi indicates that her intention was practical: “I decided to present the books this way to draw people’s attention to it and allow them to browse. I often find that at book launches the focus is hardly ever on the book,” she says. However, this kind of mounting lent the book an aura that is often ascribed to art objects. In fact, the presentation subconsciously referenced Chhachhi’s important installation work When Guns are Raised, Dialogue Stops: Women’s voices from the Kashmir Valley (2000) made in collaboration with Sonia Jabbar. The installation used prayer-book stands to display rusted iron ‘books’ bearing halting images and testimonies of Kashmiri women who are often stuck between military and militant violence.

Chhachhi is not opposed to thinking of her ‘book as an artwork’. “While laying out the works with designer Sherna and academic Kumkum, we realised that the works were calling for a large format, and we could not compromise either on the print quality or archival needs. I do hope the book will be on library shelves as a repository of my work and concerns that students can access freely. We are even thinking of an e-book in the future,” says the artist.

CHHACHHI WAS BORN in 1958 in Harar, Ethiopia, where her father was stationed with the Indian Army. However, she returned to India at three and her work is firmly anchored in her surroundings. She travelled through the Subcontinent in the 1980s when she began her journey as a photographer and activist documenting the women’s movement.

Over time, like her contemporaries, she began to doubt the ‘objectivity’ of the documentary image. This led to a body of staged portraits with women activists of the 1980s and 90s. Titled Seven Lives in a Dream (1998), it features striking black-and-white photographs. A young Urvashi Butalia (author and publisher at Zubaan) is captured posing with a collection of typewriters. In another, the activist Shahjahan Apa holds up a diaphanous burkha seated in her home surrounded by shiny utensils, her sewing machine and Chhachhi’s previous images of Apa protesting against dowry deaths. There are also images of Devi Kripa and Shanti. “I had been following these women, friends and sisters in the movement, with my camera for 10 years and creating these staged portraits was a collaborative process that found a space between my subjectivity and theirs,” she says of these iconic portraits. Interestingly, these works appear in the middle of the book in what can best be described as reverse chronology.

In another section of the book, Chhachhi revisits the folk singers and mystics she encountered while travelling in rural India. We are confronted with images of women with dreadlocks, women who roam freely without covering their upper body ‘properly’ and women whose gender is almost indistinguishable. “For me they were ‘performing gender’ long before Judith Butler’s text was written. I found these women ascetics playing with gender in a manner that allowed them freedom,” says Chhachhi. These seminal works laid the foundation for her photo- installations and her mixed media works that followed. Chhachhi is rightly regarded as one of the first artists of her generation to pursue an art practice that moved beyond easel painting to embrace mediums like photography, animated light-boxes, videos and installations.

The book then documents the late 1990s and 2000s when Chhachhi’s experience as a photographer and filmmaker combined with her interest in site-specific installations. In 1999, she created Buri Nazar Walae, Tera Bhi Bhala. Located at a petrol station on NH1, a trucker’s stop, it spoke of the lack of women’s toilets in the city. “I expected this to be vandalised but the men, most of them truckers, were interested in hearing the voices of women and seeing the large framed golden commode,” says Chhachhi, recalling her own Duchamp moment.

Neelkanth (Blue Throat): Poison/Nectar (2008) and Black Waters Will Bleed (2011) are evocative installations that focus on the environment alongside issues of gender. “I am cautious not to call myself an eco-feminist because there is a certain ‘return to nature’ and ‘eschew technology’ credo that I do not subscribe to. I am interested in technology and a lot of my recent work revolves around it,” says Chhachhi who is fascinated by the cheap Chinese and Japanese toys and gadgets that often flood the Indian market. We even get to see an interesting example of that in her Meena Kumari series. Tiled The Mermaid’s Mirror (2005), it uses toy TV sets, film stills and text as part of an installation that examines the tragic heroine and the roles offered to women in cinema. Her latest works (beginning 2010) turn towards the historical, and reference found imagery from early Chinese landscapes and Persian miniatures, from Chola Bronzes to photographs of garbage dumps, endless city vistas and satellite images of ecological disasters. The book features a careful selection of these works, and in some instances they are accompanied by delightful mythological tales like a story from Central Asia of the Kaha bird which features as a metaphor in Chhachhi’s eponymous work. It is a tragic tale of mankind’s greed and it fits well with the imagery of ships plying the oceans and dumping waste into them.