As Delhi loses control of the crisis, its Chief Minister sees sense in joining hands with the Centre 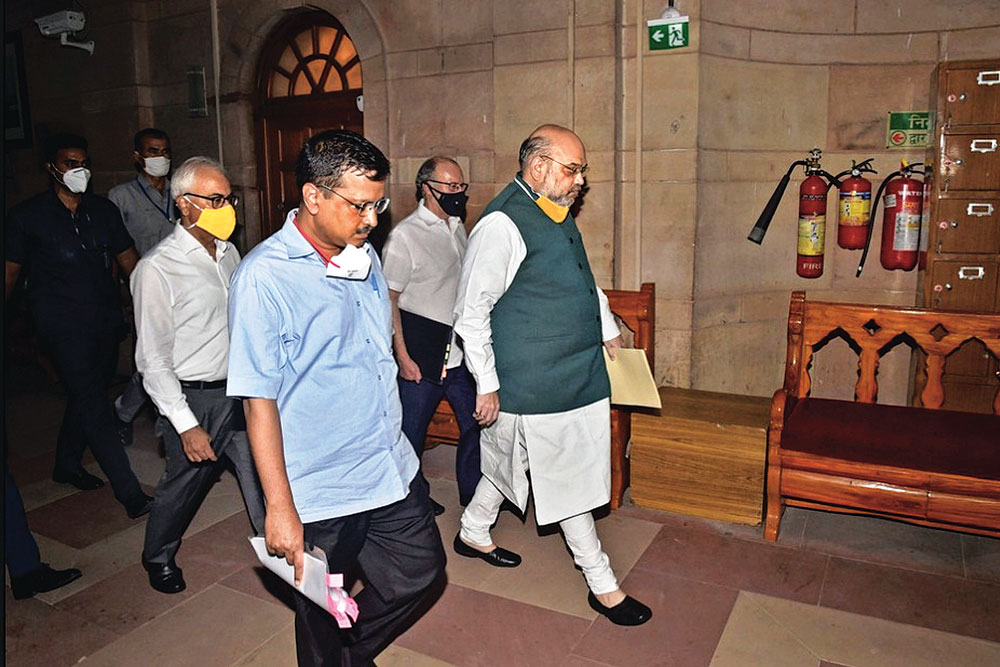 
LESS THAN a fortnight before Union Home Minister Amit Shah made a surprise visit to a Delhi government hospital, a woman’s cry for help to save her Covid-19-positive father waiting there had gone unheeded. Amarpreet Kaur is now in self-quarantine as she mourns her father’s death. She neither takes calls nor watches the news. Her husband Mandeep Singh answers the phone. “As ordinary citizens, we found it difficult to get a hospital bed in the Capital,” he says.

Shah spent nearly an hour on the June 15th afternoon visiting the Lok Nayak Jai Prakash Narayan (LNJP) hospital, which has been in the eye of the storm over the city’s inept healthcare system, laid bare to the core by the spread of the coronavirus. A television channel further highlighted the state of affairs there, airing images of bodies lying in the same ward where Covid-19 patients were being treated, a dedicated facility with 2,000 beds.

The channel’s report came out a week after Kaur, a 37-year-old social activist, tweeted for help from outside the hospital, saying her father had high fever and breathing trouble and might not survive without assistance. An hour later she said, ‘He is no more. The government failed us.’ According to her husband, nobody from the Delhi government has got in touch with Kaur, whose widely publicised tweets tagged Chief Minister Arvind Kejriwal, Delhi health minister Satyendra Singh and Aam Aadmi Party (AAP) leader Raghav Chadha. “We are not with any political party. We just want the state machinery to support everyone in need,” says Singh. The hospital, which kept telling the family the father should have been admitted at Sir Ganga Ram, a private hospital where he was tested for Covid-19, claimed the patient was brought dead. His family denies this. Kaur’s is only one among the many stories of Delhi hospitals denying beds to patients.

The Supreme Court took suo motu cognisance of the television channel’s report and described the condition in certain hospitals in Delhi, particularly LNJP, as ‘deplorable and pathetic’. The observations of the apex court tore into the Delhi government. ‘We are more concerned with the living than the dead. Look at the pathetic conditions in the hospitals. Bodies are there in the ward where patients are getting treated. The undignified manner in which bodies are handled, dumped. They are being treated worse than animals.’ Citing the grim picture from the report, it said patients were not supplied with any oxygen support or any other support, no saline drips were seen with the beds and there was no one to attend to the patients. The court also questioned the low number of daily tests, saying that Mumbai and Chennai had ramped up testing at a time Delhi had reduced it from 7,000 to 5,000.

A day later, Shah seemed at the helm, discernibly taking charge of the Delhi pandemic situation. He held three meetings over two days on measures to contain Covid-19 in the Capital, which had by then crossed 40,000, the third highest in the country after Maharashtra and Tamil Nadu. On June 16th, Delhi had 44,688 cases and 1,837 deaths. Some AAP MLAs including Health Minister Satyendra Jain and Atishi Marlena too have tested positive. Shah’s twitter handle, barring a few tweets such as one condoling the death of Bollywood actor Sushant Singh Rajput, has been dominated by Delhi’s Covid-19 situation. While Kejriwal was yet to personally take stock of the situation at LNJP, Shah posted pictures of his visit. He followed it with a slew of directions: CCTV cameras in Covid-19 wards of all hospitals, back-up canteens to maintain food supply in case infections shut down any one kitchen, counselling for doctors and nurses treating patients.


Amit Shah is trying to streamline things in Delhi to contain the Covid-19 spread, after AAP’s projection of cases rising to 5.5 lakh created a panic among the public

For Kejriwal, in whose return to power in Delhi earlier this year healthcare played a major role in the wake of mohalla clinics serving as primary health centres, the Centre’s stepping in is a setback. It amplifies the Delhi government’s limitations in addressing the health emergency. In the run-up to the Delhi election last year, the BJP had launched a video campaign targeting mohalla clinics, saying the AAP had failed to build the promised number of 1,000 clinics and that the ones established were bereft of even basic facilities and medicines. While mohalla clinics still earned him political dividends, these have failed to be of much use now during the pandemic. In fact, the pressure on hospitals is increasing as these try to cope with the rising cases in the city, which also gets patients from other parts of the National Capital Region.

Both Shah and Kejriwal, however, have struck similar ‘we need to fight this together’ notes, saying political differences need to be set aside right now. Facing the heat in the light of the worsening Covid-19 situation in Delhi and complaints of dearth of hospital beds and rising deaths, Kejriwal now refrains from political attacks. Shah, who was low-key in the initial days of the countrywide lockdown to contain the coronavirus, is back centrestage. He recently held three virtual rallies in Bihar, which is scheduled to have elections later this year; West Bengal, where elections are due next summer; and Odisha, where Naveen Patnaik’s Biju Janata Dal returned to power last year for the fifth straight term.

He entered the Delhi scene a day after the Supreme Court pulled up the AAP government. “It is the Capital. Things had started going bad. The home minister decided to go to the field himself and visited LNJP, the largest Covid hospital in the city. This should not be seen politically. There should be consensus among parties on dealing with the situation caused by the virus,” says BJP General Secretary Bhupendra Yadav. Asked why Shah had not stepped in earlier, Yadav says he had been in touch with the Chief Minister, but was refraining keeping the federal structure in mind.

The AAP government’s projection for positive cases in Delhi had set off alarm bells in a city which was already perturbed over the rising caseload. Three days before Shah visited LNJP, Delhi’s Deputy Chief Minister Manish Sisodia said Covid-19 cases were likely to reach 5.5 lakh by the end of July, prompting the need for 80,000 hospital beds. This was calculated at the existing doubling rate, which would mean 1 lakh cases by June-end, 2.25 lakh by July 15th and 5.5 lakh by July 30th. The Centre could not risk being seen as inactive as things slipped out of hand since governance and resources are shared by the Delhi and Union governments. Shah organised a series of meetings, starting with the Chief Minister, focusing on a two-pronged approach: containing the spread of the coronavirus and putting in place medical infrastructure for Covid-19 patients. Among the measures announced are doubling the testing rate taking it to 18,000 a day, tests at every polling station in containment zones, a house-to-house health survey in hotspots, adding 8,000 beds for Covid-19 patients in 500 train coaches and setting up a panel under NITI Aayog’s Dr VK Paul to submit a report on reducing cost of treatment of 60 per cent Covid-19 beds in private hospitals. Apart from this, there will be an increase of 2,000 beds in Central Government hospitals, 1,900 in ones run by Delhi government, 1,100 in private hospitals and 4,000 in hotels.

At a meeting with leaders of four political parties, the AAP, Congress, BJP and Bahujan Samaj Party, Shah said fears about and mistrust in the system among people needed to be eliminated by ensuring all parties are united in the fight against the coronavirus. According to sources at the interaction, Congress’ Anil Chaudhary said fears have stemmed from confusion over issues such as the number of Covid-19 deaths. Chaudhary refused to give details of the meeting, but said both the Modi Government and the Kejriwal government were working in sync to “cover up their inefficiencies” in dealing with the pandemic. “This meeting should have taken place earlier. Why the delay? Who is responsible for the situation in Delhi?”
AAP’s Sanjay Singh, who was also present at the meeting, says the Capital has a “multiple system” under which law and order besides land fall under the Centre and there are hospitals run by both Central and Delhi governments. “In fighting the coronavirus, these cannot be divided. This is not the time for politics. We have to fight it together.” He said 46 per cent of beds and 234 ventilators were lying vacant in the city.

The Supreme Court has said that the large number of beds lying vacant when patients are running from pillar to post to get admission in any hospital exposes the mismanagement and the sorry state of government hospitals in Delhi. ‘The duty of the state of NCT Delhi does not end in informing the people that it has arranged 5,814 beds in government hospitals and 9,535 beds including private hospitals. The state and its officers are duty-bound to ensure that patients are taken care [of]… and hospitals have necessary infrastructure and staff,’ the Supreme Court order said.

According to a BJP leader, Shah is trying to streamline things in the Capital, to contain the spread of the coronavirus, after the panic created by the Delhi government’s projections and the Supreme Court’s castigation. As for Kejriwal, he was the one who once said, “I have learnt in my 49 days of governance that the government is not short of money, what it lacks is the will.” Right now, everyone agrees it is not the time for partisan politics.