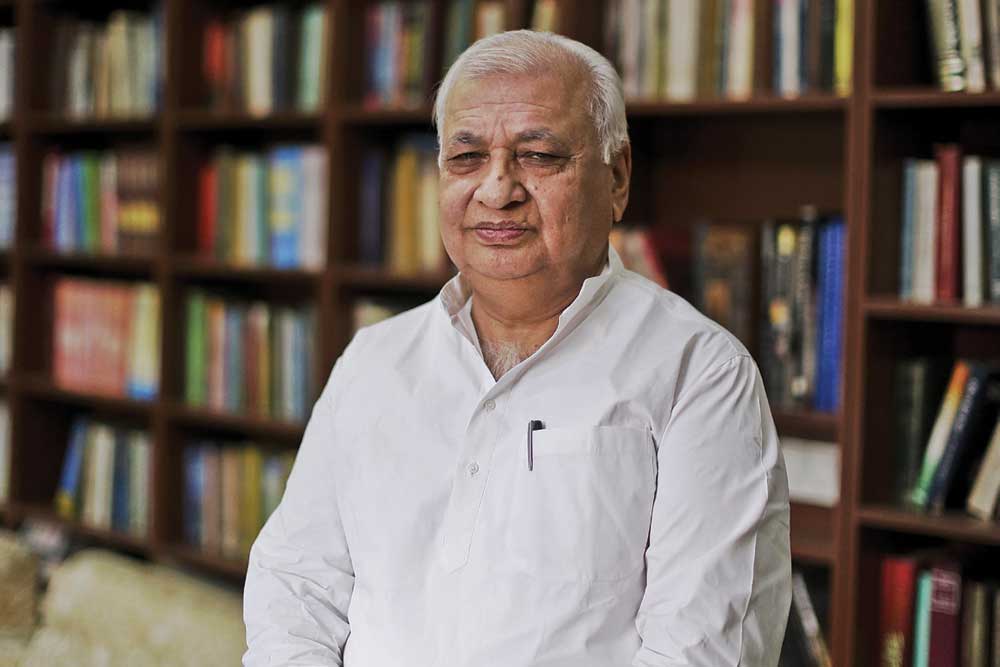 Arif Mohammad Khan was just 35 when he resigned from the Rajiv Gandhi Cabinet in 1986, lashing out at the Congress Government for yielding to Muslim clergy and for failing to protect the right of Muslim women to maintenance following a divorce. Khan had delivered a passionate speech less than a year earlier, defending a Supreme Court judgment awarding alimony to Shah Bano, a mother of five children, from her former husband. He wrote his resignation letter in the Lok Sabha when then Law Minister Ashoke Sen introduced a bill to reverse the court verdict. Khan, still a champion of progressive Muslim thought 30 years later, speaks to Executive Editor Ullekh NP on a range of issues, including the ongoing tussle over triple talaq, polygamy, Muslim insecurity and Constitutional propriety. Excerpts:

What is your message for the All India Muslim Personal Law Board (AIMPLB), which wants to retain the triple talaq divorce option for men, which is illegal in Muslim countries?

The Muslim Personal Law Board is a body of clerics mostly associated with leading madrassas. If you look at the curriculum of these, you would find that their focus is mostly on religious laws as laid down during the period when the Muslim empire extended from Baghdad to Sindh [in Asia] and Spain in Europe. An empire, or for that matter any government including a democratic one, needs force to compel obedience. On the other hand, the religion is essentially a moralising phenomenon and it appeals to the better angels of human nature and abhors the use of force and compulsion.

This explains why the Board does not talk of Islamic values like compassion and mercy and focuses on laws that need to be enforced through an agency, and the clerics view themselves as the enforcement agency. All through Muslim history, the clerics were accomplices of Muslim kings and despots as interpreters of the law. Maulana Azad has powerfully described this state of affairs: “The Islamic history is replete with the misdeed of Ulema (clerics), who have brought humiliation and disgrace to Islam in every period.” According to a Prophetic narration, ‘a Muslim is her own priest’, and then there is another narrative that asserts that in Islam there is no priesthood. But strangely, today we have more Muslim clerics than any other religious community in the world.

Today the right to triple divorce is available to Indian Muslim males alone. This practice was outlawed by Egypt in 1929, Sudan in 1935, Jordan in 1951, Syria and Iraq in 1953, Morocco in 1958 and the then Pakistan in 1961. They admit this practice is bidat (an ‘innovation’), which finds no sanction in the Qur’an or Sunna, yet insist on its retention. If they ignore the Qur’an and Sunna, what other message will they heed?

Do you sense majoritarian designs, as alleged by some politicians, behind the current call for the abolition of triple talaq?

I find this reasoning very strange. If you refer to my speech in the Lok Sabha in 1985 on the Shah Bano case, it was mostly devoted to the evils caused by triple divorce. But even before that, a large number of Muslim academicians like AA Fayzee, Danial Latifi and Tahir Mahmood had raised this issue. I do not subscribe to the view that triple talaq and polygamy are issues that concern Muslim women or men only. These are human rights issues. How can a civilised society allow a section of its women to be dehumanised and live in perpetual fear of triple divorce or the prospect of living with a co-wife? Islamic law, like almost every other religious law, permitted slavery, but today nobody asks to have slaves in the name of religion.

The Qur’an prescribes monogamy as a norm (24.32) and allows polygamy under very exceptional circumstances (4.2- 3). But the patriarchal mindset ignored the norm and adopted conditional permission as the regular law. If we no longer demand the right to have slave girls, then we can also reconsider polygamy, particularly in the light of the fact that the marriage contracts of the Prophet’s daughters had a provision to obligate their husbands not to take another woman during the lifetime of the wife.

I feel that a mere ban on triple talaq will not serve the purpose fully. Pakistan is a case in point. The law there has banned it, but the Mufti validates it through a fatwa and the common man who is not educated accepts this in defiance of the law. What we need is a law providing for three years rigorous imprisonment for a person who resorts to the practice of triple talaq. This will be in consonance with the practice of Caliph Umar (579-644 CE) who used to award corporal punishment to such men.

Is a Uniform Civil Code (UCC) a prerequisite for the full secularisation of the country?

I feel a UCC is no requirement of secularism. Secularism thrives and flourishes in diversity and pluralism of every hue. The basic requirement of secularism is a temperament that does not fear diversity. Rather, it embraces and cherishes diversity. We in India have always subscribed to the Vedic dictum, ‘The truth is one but is perceived as many’, and that all people should not be confined to one single interpretation of reality. It is this Indian vision of accepting and respecting diversity which is now being embraced by even advanced countries as a replacement for the old secularism which had anti-religion overtones. Our secularism accepts and respects the freedom of conscience of each and every individual, believer or non-believer, and insists that each individual has to seek her own light without the interference of any other person, organisation or government. This is the essence of the first part of Article 25 of the Constitution.

If we no longer demand the right to have slave girls, then we can also reconsider polygamy… the marriage contracts of the Prophet’s daughters had a provision to obligate their husbands not to take another woman during the lifetime of the wife

Do you fear, as several clerics insist, that a UCC would be a mere extension of Hindu laws?

Questions like this are rooted in the mindset that promotes conspiracy theories. If we look at it dispassionately, the Hindu or Sanatan tradition has no history of seeking to impose its values on others. According to Swami Vivekananda, during the period of its decline it refused to share even its wisdom with others. When you read Alberuni’s India, you see what difficulties Al-Biruni (973-1058 CE) had to overcome when he wanted to learn Sanskrit. Indian tradition is not known for its expansionist designs. It is known for its knowledge and wisdom, particularly in the area of study of the self or soul. Secondly, it must be clear that Hindu Code is not strictly a religious law. The old Hindu law did not recognise divorce. The Hindu code, like any other modern law, has provided for it. Similarly, it provides property rights for daughters, which was not so under the religious law. Likewise, there are many other provisions which are modern and have nothing to do with old Shastric law.

Do not forget that the Hindu code is mostly the product of the modern minds like Pandit Nehru and BR Ambedkar. It is a modern piece of legislation, but it was labelled ‘Hindu’ to assure those who were opposed to a UCC that it will not be applicable to them. Finally it is interesting to recall what Nehru said to Taya Zinkin, a British journalist, in the late 1950s. When she asked him to describe his greatest achievement, he said, “I succeeded in securing rights for my Hindu sisters which were so far denied to them.” On being asked about any of his disappointment, Panditji said, “I could not do the same for my Muslim sisters.”

Some liberal politicians and intellectuals argue that the public opinion being sought by the Law Commission on the UCC is a devious move to ensure a Hindu polarisation ahead of crucial state elections. What are your thoughts?

I would not like to discuss this issue in the context of current political trends. But the fact is that it is the Constitution that has mandated a UCC as a directive principle. If we link it with communal polarisation today, then what motivated the AIMPLB to launch an extremely aggressive and raucous movement in 1986 to pressure the Government to reverse the Shah Bano judgment? Do not forget that communal organisations like the Board thrive only when they spread fear, suspicion and conspiracy theories in their constituency. They thrive on creating a sense of victimhood. The same accusations of religious bias which we see today were made by these elements against every Congress Government. Even Nehru, a self-confessed agnostic, was not spared. If you see the old records of proceedings and speeches of leaders of the Muslim Majlis Mushawarat (an apex body of Indian Muslims), then you will find that everything that is being said today is only a repetition of what was said in the 60s and 70s. If this reasoning is correct, then the best strategy would be to stop opposing a UCC in the name of religion and ask the Government to present a draft for soliciting public opinion and contribute positively to ensure that the proposed law contains nothing that is abhorrent to any religion and incorporates all that is good in various traditions.

How insensitive do you think politicians such as Asaduddin Owaisi are to the rights of Muslim women?

I never like to discuss individuals. But politicians who espouse separatist or communal causes are mostly people who in their personal lives have not much to do with religion. To them, religion is not a matter of conviction but an instrument for political gains. The classic example is that of Jinnah. Many politicians with liberal education and secular inclinations thought it good politics to align with the clergy. Actually we have a quote from legendary philosopher Ibn Rushd which speaks about those who mix religion with politics: “If you want to rule over the illiterates, then present your claims and desires wrapped in religion.”

Are you worried about Hindutva slogans arising to scrap Article 370 of the Constitution and to construct a Ram Janmabhoomi temple?

Howsoever contentious an issue may be, we can always find solution through negotiations, discussions and goodwill. But the primary requirement is to realise that we are one nation, one people—we may compete with each other, but we are not divided into hostile or enemy camps. The colonial legacy of divide-and-rule has deeply impacted our psyche, and we still view ourselves as a zero-sum nation. Now, we must give up that mindset and realise we are here to live together. It is up to us either to live a life of conflict or choose the path of fraternity and cooperation where we strengthen each other, we complement each other and realise we are incomplete without each other. The Indian way of life has always cherished diversity of faith, culture and language, but during colonial rule we became suspicious of each other and we have paid a heavy price for it in the form of India’s vivisection. Now we must rise to the occasion and realise as children of India, we have no other place to go, we have no choice but to promote unity and fraternity. It does not mean uniformity of opinion or politics. It only means harmony and respect for one another. At the moment we are engaged in this issue of getting rid of triple talaq, an issue that is vital to ensure gender justice. We will discuss other issues when they arise. 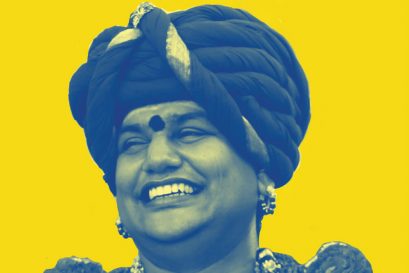 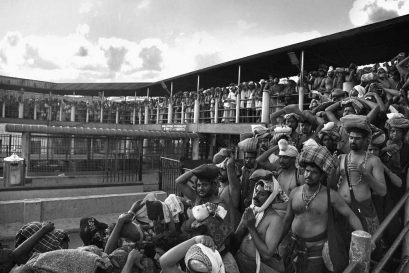