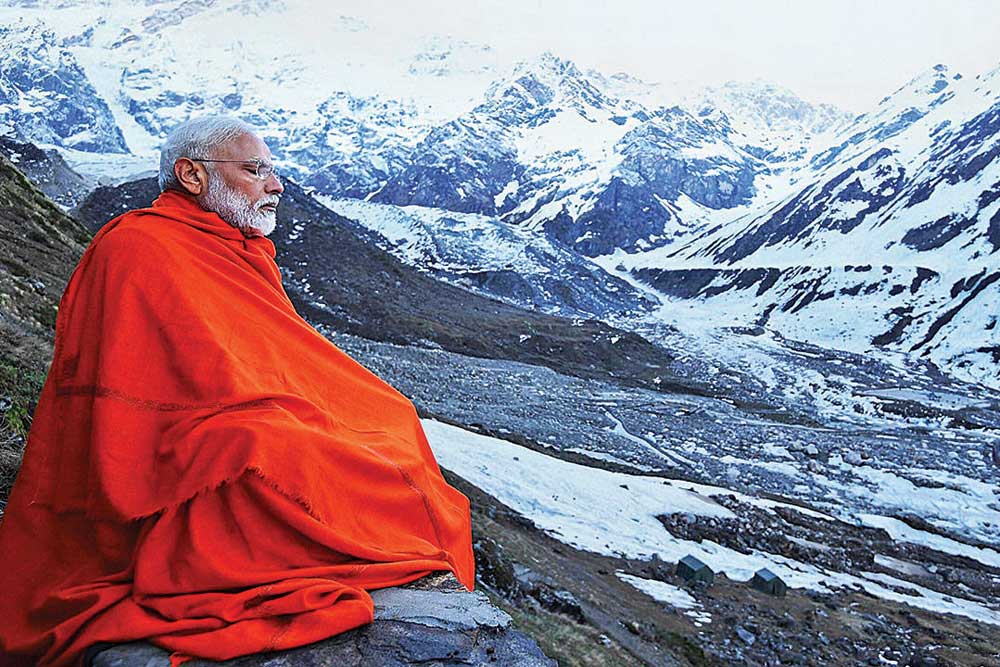 AFTER THE CAMPAIGNING FOR THE LAST PHASE of elections got over, Narendra Modi went to Kedarnath. The cameras, as usual, were in tow. Modi, we were told, would meditate in a cave. We got to see him inside it, of course. He was wrapped in a saffron-coloured shawl, his eyes closed for the benefit of the photographer.

The photo went viral within minutes. More than his supporters, Modi’s waspish critics enabled its spread in geometric progression through social media. Some of them launched a deep examination of the picture. Soon, a few hooks were detected on the wall of the cave; these were circled immediately on photos to be pointed out easily. Modi’s critics sneered that the hooks were meant to hold the Prime Minister’s change of costumes. Some commented that the gown Modi wore did not belong to Uttarakhand and that he had no idea about what the locals wore. The gown turned out to be a gift from the Uttarakhand chief minister to Modi, specially tailored for him, and given to him during an investor’s meet in Dehradun. Some guffawed and said: ‘Arre, the cave also has a bed!’ As if Modi should have meditated and then rested on a bed of thorns!

Later, the Uttarakhand government clarified that Modi was not the first but second person to stay in that cave; that anyone could rent it out for 990 rupees per night.

The derisive and impenitent scrutiny went on and on. Why was Modi turning his back towards the temple and then folding his hands? Why was he walking over a red carpet? What cap was he wearing? Dozens of memes were created. It was said that he is obsessed with cameras. As an example, a video of his was shared in which he is seen raising his arms at the crowd in Kedarnath, asking them to chant ‘Har Har Mahadev’ and shooing away a security person from the line of vision of the cameras.

That is how Modi has functioned all these years, using the camera fully to his advantage. A photographer friend who recently followed Modi in Varanasi said he was amazed at the kind of detailing that went into lighting in his campaign vehicle. As Modi appeared from the roof of the vehicle in the night, a light always shone on his face so that his photos do not appear dim at all. In so far as photo-ops are concerned, Modi has proven to be a master strategist. Remember how he bowed down and touched his forehead to the steps of the Parliament in May 2014. Or, how he appeared donning a multi-coloured turban on his first appearance as PM on Independence Day at the Red Fort. Or, how his photos were used all over the venue of the Ardh-Kumbh mela this year in Prayagraj. There is no surprise then that he posed for the photographer in the cave in a meditative pose. The surprise is that some of his detractors still take the bait he deftly lays for them, contributing immensely to his media blitzkrieg.

IT IS WITH THE SAME IMPRUDENCE that the opposition has vacated all ground for Modi when it comes to nationalism. The opposition’s handling of Pulwama more than how his Government did, played a significant role in his victory. Here, a distinction between Pulwama attack and the subsequent Balakot strikes is important. Ideally, Pulwama should have led to a furore. It should have caused damage to Modi’s Teflon image. After all, a suicide bomber managed to carry an explosive- laden car to the national highway in Kashmir Valley to blow up a bus carrying CRPF personnel—this despite intelligence agencies issuing a warning about such a possibility. The opposition, especially the Congress, should have used a little political astuteness and cornered Modi Government over its inability to prevent such an attack. But, as the Congress remained busy with creating witty memes for a select lot—and one hopes political pundits in future study this further—somehow, a message got conveyed that only Modi could save India from terrorism, from plunging into a position of weakness.

And then, Balakot happened. While some of Modi’s detractors may still be unconvinced about the efficacy of these strikes and pounce upon those who tried to produce some evidence in this regard, they failed to realise that two things have changed irrevocably: one, Pakistan’s bluff on nuclear deterrence has been called once for all; two, no matter what government comes on May 23rd, or in 2024, it will have to at least match Modi’s Balakot action in the event of a major terrorist attack like the one in Pulwama.

The distinction between Modi gaining from Pulwama and Balakot is important because even before Balakot, the mood in many parts in India had shifted in favour of Modi. After Balakot it only strengthened further as his detractors committed one mistake after another: portraying, for instance, Imran Khan as a noble statesman during the pilot captivity episode.

As the Congress remained busy with memes, a message got conveyed that only Modi could save India from terrorism

If the opposition had played its cards right, Modi should have been struggling to retain his position on the victory podium of nationalism. Rahul Gandhi particularly failed on this account. The scholar Bhagwan Josh has argued that the three sections of “Indian social reality” (class, caste, and community) cannot combine in the absence of an over-arching ideology of nationalism. The Congress, he says, remained in power by these “codes of mass consciousness,” overlapping with what he called the “Hindu cultural internality”. In 2014, apart from his hardcore Hindutva fans, many people voted for Modi because they saw in him a strong ‘nationalist’ leader like Indira Gandhi—a leader who had the guts to sever East Pakistan and be seen as representing concerns of Muslims and Hindus (Dalits included) alike. A close relative of hers once told this writer how he thought she did it. “She wore nationalism on her sleeve and a rudraksh around her neck. The majority community saw no contradiction with this image of hers and her image as the benefactor of the minority community,” he said.

In 1961, Jawaharlal Nehru had remarked that ‘the communalism of a majority community is apt to be taken for nationalism’. It is not clear in what context he was saying this. But what is clear is that by the early 80s, his daughter was conscious of the fears— real or unreal—of the majority community and sought to dispel them openly. In a meeting on May 31st, 1984, according to political commentator, AG Noorani, Gandhi ‘assured the majority community that striving to give minorities their privileges did not mean that the government was careless or negligent towards the rights and privileges of the majority’. ‘If there is injustice to them [majority] or if they did not get their rights, then it would be more dangerous to the integrity of the country!’ Noorani quotes her saying in that meeting. In 1983, as Noorani recalls in a piece in the Economic and Political Weekly, her party’s general secretary CM Stephen declared that ‘the wavelength of Hindu culture and Congress culture is the same.’ Noorani cannot but observe wryly (quoting a study by Myron Weiner) that this happened even though in the 1980 elections, in constituencies with substantial Muslim populations, the Congress vote increased to 38 percentage points (from 29 per cent in 1977).

What would have happened after 1984 had Indira Gandhi not been assassinated? Whatever that may have been, Modi today has occupied the space of nationalism and fused it with the concerns of a significant number of people belonging to India’s majority community.

One of Modi’s notable critics, Yogendra Yadav detected this ceding of ground after Pulwama: ‘Like the European elite, we have started associating nationalism with negativity, jingoism and ethnic supermacists. In doing so, we have cut ourselves off from the rich and inclusivist legacy of Indian nationalism. We want to live in a modern nation-state without caring for our nationhood.’

It is no surprise then that Yadav has now called for the death of the Congress party. Influenced by left ideologists Rahul Gandhi has failed to learn from his grandmother. “Nationalism was not an organic part of the ideological makeup of the communists in India,” said Josh. Many in Congress believe today that things could have been different if their President had not gone and expressed solidarity with Kanhaiya Kumar after his arrest in the ‘Tukde- Tukde’ case at the Jawaharlal Nehru University.

This is not to suggest that Kumar shouted those slogans, but even this is not true that just because a certain channel may have doctored one video of that night, nobody shouted those slogans that night in the JNU. Days before Rahul Gandhi and Kanhaiya Kumar finally met in 2016, the Congress MP Shashi Tharoor likened Kumar to Bhagat Singh. In the wake of severe criticism, the Congress had to officially distance itself from that statement.

In 2019, Modi is not the same man as he was in 2014. In 2014, he harped on development, on filling the silence, on making Bharat sone ki chidiya once again. This time he is speaking more and more on Balakot, of army’s valour, of teaching lessons to India’s enemies. While Rahul Gandhi and his social media team is busy in creating memes on Modi, they have not specified at all what their alternate vision is. If at all Chowkidar was chor, what did the Congress have to offer?

Others in opposition also failed completely in conveying their idea of India to the people. In an interview to the comedian Kunal Kamra, Arvind Kejriwal said that this election is not to choose a PM candidate, but to oust the present PM (Modi). ‘After that we will choose someone from India’s ek sau tees crore janata,’ he said. Many voters would have found Kejriwal’s ‘Koi to ban hi jaayega’, as dangerous as Sam Pitroda’s ‘Hua to hua’ statement.

The former Aam Aadmi Party leader Ashutosh says in a recent article in NDTV that the country has become more ‘Hindu’ than ever. ‘Hindus in the earlier era were shy of flaunting their Hindu identity, but not anymore. This I feel is the real ‘contribution’ of Prime Minister Narendra Modi,’ he writes. He does not specify why he feels the Hindus were shy of flaunting their identity earlier. But in the direct dialogue between Modi and most of his voters, the answer to this question is not important. What is important is the acceptance of this theory and that it is under Modi that the shyness has disappeared. For most of them, it also means a certain reversal where espousing certain symbols of nationalism is not a taboo any longer. Who could have imagined that a day will come when in Bihar, the don Shahabuddin’s wife, Hena Shahab, contesting on a RJD ticket from Siwan would utter ‘Bharat Mata ki jai’ and ‘Vande Mataram’ in her political rallies.

As the Congress stands defeated, Rahul Gandhi must realise that ‘new India,’ as many are calling it now, needs much more than a little tweaking in Congress to allow it to govern her. Perhaps instead of falling back on his core team, a majority of whom are totally disconnected from the reality on ground, he could learn from one man who has kept the Congress flag flying in one state: the Punjab Chief Minister Amarinder Singh. 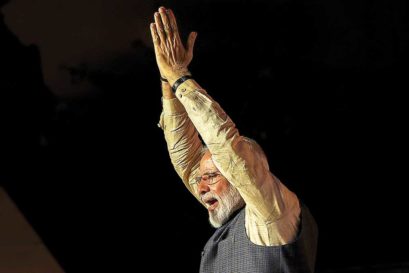 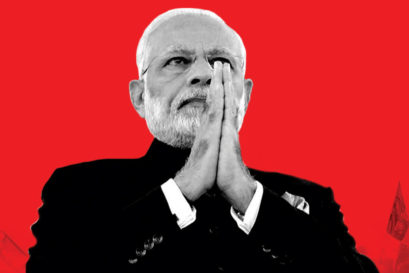 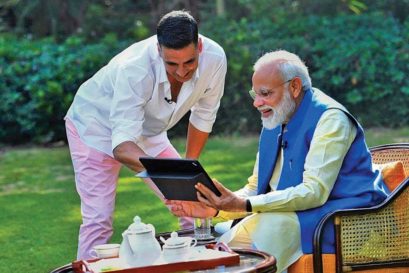