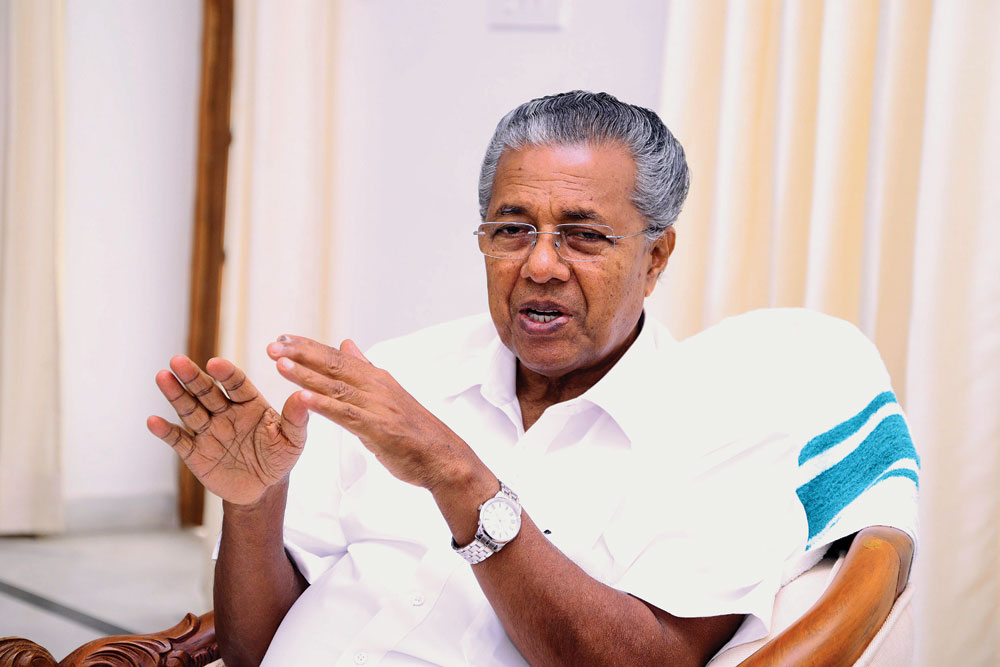 
The chief minister of Kerala had a reputation for being pithy. But he seems to have changed, showing an inclination to dwell at length on the policies of his coalition, which has secured another term in the recent Assembly election. This historic victory makes Pinarayi Vijayan the first chief minister of Kerala to return to power for a second straight term. But he downplays the ‘strongman’ image and his growing, newfound popularity, saying that he is merely the head of the Communist Party of India (Marxist)-led government alliance which could earn the trust of the people through proper implementation of its programmes. He spoke to Open on the challenges he faces amid the second wave of Covid-19 that has seen a major spike in the state. Excerpts:

What are the key factors that contributed to your historic victory?

Foremost is the credibility of the Left Democratic Front (LDF) government. We walked the talk. We tried our best to deliver what we had committed to the people. We had made 600 promises to the people of Kerala and fulfilled 570 of them, notwithstanding several natural calamities that wreaked havoc over the past five years as well as the Nipah epidemic and the Covid-19 pandemic. Our efforts, when we are in power (from 2016 to 2021 and for the next five years), are hinged on two objectives: welfare and development.

It is crucial to note that we did not allow communal and divisive elements to tear apart the secular credentials of our state. More importantly, in the run-up to the election, when the LDF stood on a positive platform, both our rivals, Congress and the Bharatiya Janata Party (BJP), were busy indulging in a negative politics and campaign and the people of Kerala rejected them outright.

There is a narrative built by pundits that it is the cult of personality as a strong leader that helped you seal your victory. How do you respond?

We communists do not give much thought to such stereotyping of people among us by a section of the media or by others. These days, it has become quite fashionable to do so. That’s their preoccupation, not ours. While it’s true that I led the government and the election from the front, all that I have done is based on the policies and programmes of LDF. The media, of late, has been trying to sensationalise this victory for reasons known best to them. I don’t subscribe to such narratives.

What was the role played by your party, CPM, in this election? You are seen as controlling both government and party.

CPM functioned as a well-oiled machinery in this election, doing what it does best and has always done: to campaign tirelessly to ensure the victory of its coalition and government. Again, I don’t see any logic or meaning in such ‘strong man’ narratives. I don’t agree with such views. The party worked in tandem with the LDF government to highlight the latter’s achievements. And the party remains firm in its resolve to carry the message of the government as it does during all elections. The organisational prowess of the party contributed immensely to the government returning to power.


We tried our best to deliver what we had committed to the people. We had made 600 promises to the people of Kerala and fulfilled 570 of them

Let’s talk about the biggest challenge for the new government. Is the Covid situation getting out of control? How do you plan to bring down the number of infections?

It’s true that there has been a surge in numbers in this second wave. However, this is not a phenomenon restricted to Kerala alone. We are sure that the total lockdown now in force in the state will bring the situation under control. Our priority now is to ensure that our healthcare system does not come under tremendous stress and that there is no disruption of health services. We are taking each and every measure to provide attention, care and treatment to the needy. We are also committed to keeping the fatalities as low as possible. This is possible only if we give timely and proper treatment without putting pressure on the system. I am confident of meeting all such demands and bringing the state back to normalcy very soon.

What are the steps initiated by the government to buy vaccines to meet the soaring demand?

Kerala is totally equipped and geared to go for complete vaccination. At the same time, I must admit that the vaccine policy of the Union Government and various other bottlenecks, including shortage of vaccines, are hurting everyone, including Kerala. Our stated view is that Covid treatment and vaccination must be provided for free. Most countries in the world, developing or developed, are offering free Covid vaccination. Our stand has been communicated to the prime minister. We have also taken steps to procure vaccines on our own. There is scarcity and shortfall in vaccine production which we want the Centre to address on a war footing.

What are the key segments that the new government will focus on to generate much-needed jobs? The state is lagging behind in employment and growth numbers.

The top priority is to mitigate the suffering caused by Covid. Then we will focus on our commitments mentioned in the election manifesto. We are a state endowed with quality human resources and our early initiatives will be to create jobs through various schemes. The infrastructure development we have done over the past five years is expected to bear fruit and generate employment. We have made steady progress in information technology, startups, tourism and so on. Once the situation normalises, we will reinvigorate our efforts to create growth and bolster the state’s economy. We are confident of meeting our goals in terms of development and investment.

Why have you taken a combative position against Central agencies probing the gold smuggling case? How do you justify the judicial inquiry into their activities?

Our resounding triumph in the election is proof of all lies spread by our rivals and vested interests. Both the UDF (Congress-led United Democratic Front, LDF’s rival coalition) and BJP stand exposed and vanquished. This was also a verdict against the diabolical designs of various Central agencies less interested in a probe into gold smuggling and more in playing politics.

Remember, I had personally requested the prime minister, as soon as the news of the gold smuggling incident broke, to investigate this crime done in the name of diplomatic transfer of goods. But to our disappointment, most of these Central agencies that came here to investigate the matter were least interested in nabbing the perpetrators of the crime and those who benefited from it. They went about tarnishing our leaders and people. Even a cursory look at some of the statements produced in courts by these agencies would expose their naïveté and political designs.

We are sure the total lockdown now in force will bring the situation under control. Our priority is to ensure there is no disruption of health

Kerala cannot be allowed to be trampled upon by such agencies violating rules and regulations. Therefore, we decided to let a judicial committee look into serious charges against these agencies which were meant to investigate a crime and conspiracy.

How have been your ties with the Union Government in fighting Covid?

We have good ties with the Centre in this regard and have always cooperated with the Union Government. After all, this is not a partisan issue. But as you know, most verticals are with the Centre. The state’s resources are very scarce and unless the Centre offers help, there will be a huge stress on state finances. We have already aired our views and grievances to the Centre.

In this election, CPM decided to bench several veteran leaders who had been legislators for two straight terms. Why did you take this decision that was considered problematic?

That was a collective decision taken after rounds of discussions at various levels of the party. The main purpose was to strengthen the party, enthuse our cadres and prepare the movement to take up challenges in future. The results have proved that it was not problematic, and the naysayers have been proved wrong.

In the national scheme of things, how do you view this victory in what is often called the last outpost of communism in India?

It is no secret that the Left has shrunk nationally and suffered electoral setbacks. But then, the relevance of the Left in India cannot be measured through its poll victories alone. We are all happy about this win in Kerala, but even without such gains, the Left in various parts of India has been leading activities and campaigns politically and ideologically along with other secular and democratic forces. Many agitations, including the ongoing farmers’ and other workers’ protests, are either being led or are inspired by the Left on a national scale. The Hindutva forces are being resisted in many parts of India by leftists, both politically and ideologically. That is why the Rashtriya Swayamsevak Sangh (RSS) hates the Left more than any other political entity in this country.

With the Kerala CPM gaining in power, are we to expect CPM to distance itself more from Congress in other states, including in places where your party has an electoral alliance with Congress, your arch rival in Kerala?

First of all, I think that question needs to be posed to Congress, not us. Isn’t it? As with such electoral tie-ups and ‘understandings’, our last Party Congress [the highest decision-making meet of CPM], held in 2018 in Hyderabad, had made clear our objectives in forming such ‘understandings’. The results here show that such decisions don’t have any effect on elections in Kerala. Our goal is to help bring down through the ballot the BJP government at the Centre, which is fully supported and guided by RSS.

Will there be greater infusion of young blood at the top tiers of the new government?

I cannot comment on that now because the party and LDF have to finalise this through discussions. But I can assure you that the aspirations of the people of Kerala who have voted us back to power will be kept in mind while forming the ministry.