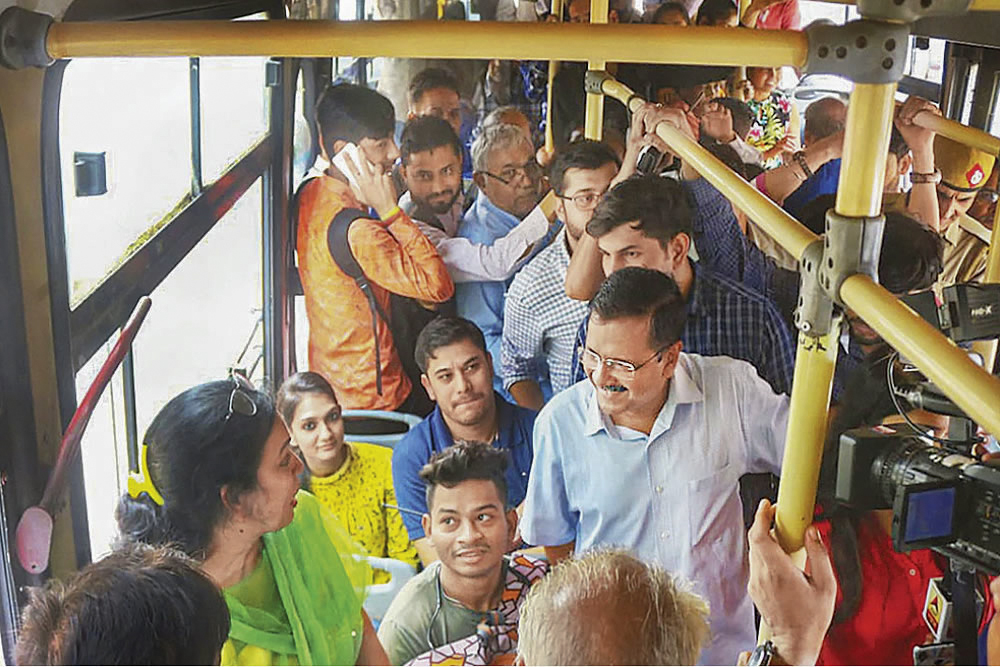 THERE ARE SOME lessons politicians deliberately take great pains to not learn. When Arvind Kejriwal instituted the odd-even scheme to combat air pollution a few years back, it was a resounding failure and much of the blame had to do with the exemptions it granted, primarily for women. The Indian condition is that even the smallest of exemptions will doom any policy. Romantically, it goes by the term of jugaad, which is nothing but a clever word for cunning, something that your parents and teachers once told you was not a good thing. In any case, once half of the human population of Delhi was allowed to travel by vehicle, there was no way that the scheme was going anywhere but the dustbin.

And, now, simultaneously with Delhi’s pollution once again making its annual unbreathable levels, Kejriwal has rolled out another freebie for women—free bus rides. This is not couched in any grand objective except to get women’s votes when the state goes to polls next year. But, leave alone the lack of rationale for such a subsidy—why are, for example, Dalits not more deserving of free bus rides than women—it might not do him much good for a number of reasons.

Bribing voters legally does work. And so does the careful cultivation of the women’s vote. But they are usually mutually exclusive and both have necessary conditions attached to it. When it comes to the first case, the best lesson comes from the late J Jayalalithaa and it is that a few stray crumbs thrown just as elections are imminent is a poor trick. What she exhibited was that the freebies must be overwhelming in nature and it has to be relentless all through a government’s term. In Tamil Nadu, she gave the people everything from salt to laptops to one-rupee idlis. And it worked. In a state where a party is never returned for a consecutive second term, she became chief minister again.

The best example of capturing the women’s vote is Naveen Patnaik in Odisha. It has led to him retaining power for two decades but it is not free bus rides that got him such absolute loyalty. There was a successful alteration of government policy to make women beneficiaries of welfare programmes. Women, being more nurturing of the benefits received, the family became financially secure which in turn led to even men begrudgingly accepting the change. Giving women their own property, which is a form of what Patnaik did, is one of the surest and quickest ways of social progress and the byproduct was a vote cast in iron for Patnaik.

A free bus ride might be a welcome sop but it is not that one travels any distance when it comes to election results. And it will antagonise men, who smart politicians know, all other things being equal, are the ones who decide elections. It takes time and thought to craft a women’s vote bank and it is a bit late to do it now for the Delhi elections.