Nitish Kumar is cozying up to Modi. Why? 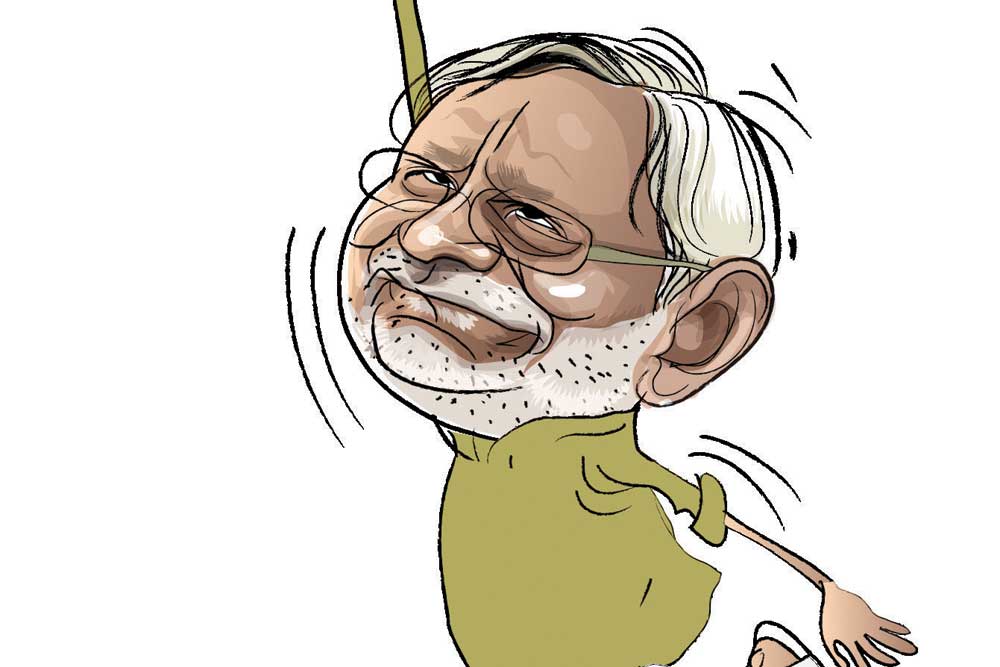 ON DECEMBER 3rd, Mavalankar Hall in Delhi was abuzz. Amid drumbeats, Janata Dal-United (JD-U) supporters from across the National Capital Region were gathering in large numbers. The occasion was the official launch of the party campaign in Delhi for next year’s municipality polls. Around 1 pm, Bihar Chief Minister Nitish Kumar, the party president, was joined on stage by other senior leaders—Sharad Yadav, KC Tyagi, RCP Sinha, Ali Anwar and Sanjay Jha, among them. Bonhomie seemed to prevail. But then Sharad Yadav, the JD-U’s former president, took the microphone and mounted an attack on the Modi Government for forcing the misery of demonetisation upon the common man. This created a flutter, for Nitish Kumar had already voiced his support for the Prime Minister’s move. Speaking next, he spent half an hour on development initiatives in Bihar before addressing the issue that had his audience at the edge of their seats. “Sharadji has said a lot about demonetisation and problems,” he said. “In my case, I welcome… such a bold step. But demonetisation alone will not end black money. As a next step, Modi should immediately target benami properties to deliver a double blow to black money holders.” Yadav sat in gloomy silence even as other leaders took the party president’s cue. “We are against black money,” said Ali Anwar, Rajya Sabha MP, afterwards, “and will support any effort in the right direction.”

Unlike his previous visits to the capital, Nitish Kumar pointedly did not meet his friend and demonetisation critic Delhi Chief Minister Arvind Kejriwal this time round. So sharply has Nitish Kumar broken ranks with the opposition at the Centre— especially with the Congress, an ally along with the RJD in Bihar—that speculation now abounds that he is not averse to mending ties with the BJP at some point, an alliance he had ironically snapped in 2013 over the issue of Modi being made its prime ministerial candidate. The JD-U leader denies it, but observers wonder if the wily politician is hedging his bets.

“The debate around demonetisation is such that those who are against it are not seen as clean politicians,” says Sanjay Kumar, professor at Centre for the Study of Developing Societies (CSDS). “Of course Nitish wouldn’t be like to seen in the league of Lalu and Mulayam. So in the current scenario, he is taking a high moral ground.” In this view, by backing Modi on black money, Nitish Kumar is playing to voters in Bihar who praise his governance but are put off by his alliance with Lalu Prasad. This way, he might win over those who are well disposed to him as a leader but didn’t vote for him in last year’s state polls. If demonetisation proves a failure, he can always blame the BJP for poor implementation. Seen like this, his stance is a win-win.

Ever the pragmatist, on October 3rd, Nitish Kumar minced no words in supporting India’s surgical strike four days earlier against Pakistan. Unlike other opposition leaders, he insisted that no doubt should be cast on the Centre’s claims: “There should be no politics on the issue of terrorism. We need to be united and therefore we support any necessary step that the Government is taking or will take on that matter.” Reminded by reporters that Arvind Kejriwal had demanded proof of the strike, he replied, “Surgical strikes were a necessary and successful operation.”

Given that the JD-U’s Grand Alliance with the RJD and Congress had secured a massive mandate against the BJP just last year, Nitish Kumar’s postures seem much too Modi-friendly to be taken at face value. “You are reading too much into an administrative or ideological stand taken by the party,” says Tyagi, a party general secretary. “We shouldn’t be just opposing everything done by the Government. As far as our alliance [in Bihar] is concerned, we will complete our term.”

Ever the pragmatist, by backing Modi’s plans for demonetisation, Nitish Kumar is playing to voters who praise his governance but are put off by his alliance with Lalu Prasad

That Nitish Kumar has been trying to forge an all-India alliance of like-minded parties against the BJP only compounds the intrigue. For the forthcoming polls in Uttar Pradesh, for example, he has forged a pre-poll alliance with Ajit Singh’s Rashtriya Lok Dal, and has tried drawing the Samajwadi Party, Congress and other parties into an anti-BJP coalition, an effort that hasn’t yet worked out. “It’s an attempt by him to emerge as a consensus leader from opposition against Modi in 2019,” says Professor NK Choudhary, who teaches Political Science at Patna University, “But why would Mulayam or Mamata [Banerjee] support Nitish when they all have similar ambitions and strength?”

Attaining prime ministership, Nitish Kumar appears to have realised, is harder than he thought. This may be why he hushed his supporters silent who were raising slogans of ‘Hamara PM Kaisa Ho, Nitish Kumar Jaisa Ho’ at the meeting of December 3rd. “Slogans don’t make someone PM, unless you have enough support,” he said, “I know my limits and don’t think too far.”

Another factor may explain Nitish Kumar’s latest stance. He along with George Fernandes had parted ways from the erstwhile Janata Dal to form the Samata Party in 1994. A year later, Nitish Kumar fought Bihar’s Assembly polls in an alliance with the CPI-ML, winning only seven seats. The next year, he teamed up with the BJP and his electoral fortunes started soaring. In 2000, he was sworn in as Chief Minister for the first time but had to resign within a week on failing a house majority test. In 2005, he finally achieved that post after scoring a majority in alliance with the BJP; barring a 10-month period in 2014-15 during which he had Jitan Ram Manjhi take over, Nitish Kumar has been Chief Minister ever since.

The first election the JD-U contested without any alliance was for the Lok Sabha in 2014. It won only two seats. A year later, Nitish Kumar joined hands with Lalu and the Congress and emerged victorious. “Despite being in state politics for so long, Nitish has failed to cultivate a core voter group, which is crucial for any regional party or leader,” says Sanjay Kumar. “When he was with the BJP, he won on their strength, and [last year] more than his, it was Lalu’s victory.” His caste group of Kurmi voters are too few.

Political analysts see his recent stands as a survival strategy to play both sides, getting comfortable with the Modi regime while keeping his allies on tenterhooks. “He used to do this while he was in BJP, and now he is using similar tactics with RJD,” says Choudhary. “After all, why would someone accept him as a leader with no base vote?”

Another dimension has to do with Grand Alliance dynamics. His command as Chief Minister is not as strong as it was with the BJP as an ally, and he now has to cede decisions to Lalu on minor administrative matters. “He had full control over the government and was functioning on his own when he was with us,” says former Bihar BJP President Mangal Pandey. “With Lalu, he has lost that. He is playing a second fiddle to super chief minister Lalu.” The coalition is not working as smoothly as appearances suggest. “Nitish knows that by the time the next state elections come in 2020, Lalu would like his younger son to take over, RJD being the larger party [in the coalition],” says Choudhary. “In that case, he has no option but to hang around with BJP to remain in power.”

Many RJD leaders are unhappy with Nitish at the helm. “Before taking any stand, he should realise that we are the largest party of this alliance,” says Raghuvansh Prasad Singh, a senior RJD leader. “However, as a party chief, he is free to take any decision, and so are we.”

Playing down his alleged cosiness with the BJP, a few days ago Nitish Kumar had this to say: “There are some people who are suggesting things that would be political suicide for me. I think they should stop baseless speculation.” But his track record suggests he would readily switch camps if it serves his ends. What’s important to him is his reputation for good governance. “This is an image which gets you support across caste groups,” says Sanjay Kumar. And to sustain it, Nitish Kumar has to play his politics by the ear.