Navjot Singh Sidhu strikes a chord with the masses, but at a political cost 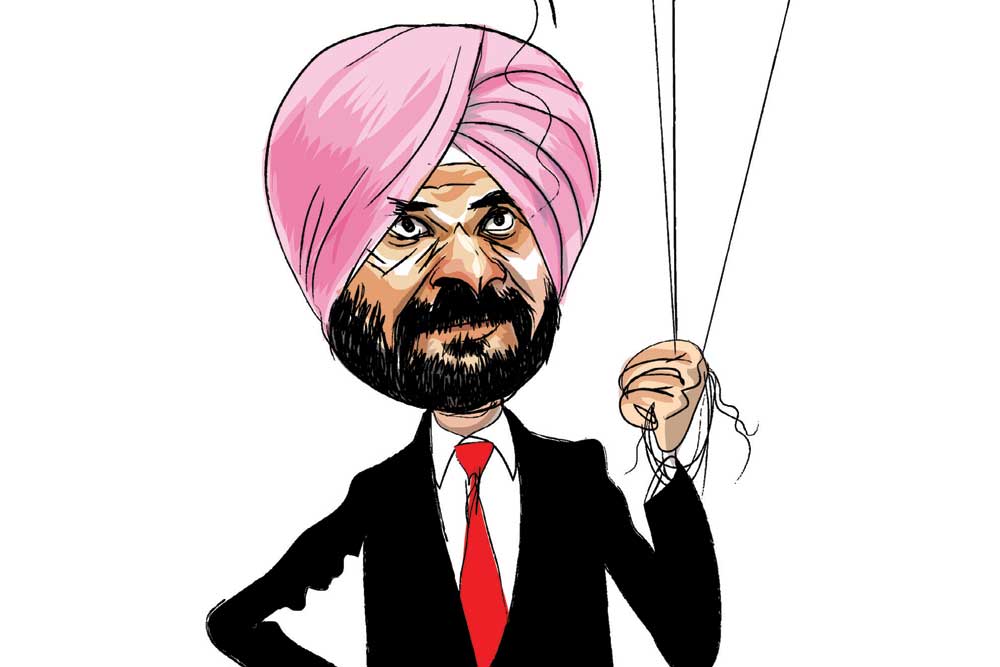 IT MAY NOT BE inappropriate to say that Navjot Singh Sidhu has a face behind the mask that he constantly tries to hide. Great comedians have talked about this professional dilemma. So have clowns and slapstick performers known for their frenetic pace. Sidhu perhaps fits into the last category, a sort of a Punjabi Jim Carrey in a turban who wants to provoke laughter at all cost, even as he keeps control of a fastidious audience. From a quiet cricketer to a loud sport commentator to a flamboyant politician known for his wisecracks and defections, Sidhu, now a Congress minister from Punjab, seems to be struggling lately to keep pace. In the process, he keeps falling back on old shticks and courting controversy and embarrassing his party.

Perhaps ‘Sidhuisms’ have lost their sting, at least partly. He really put his foot in the mouth recently when he said Punjab Chief Minister Amarinder Singh “is a captain in the Army” while his captain and that of Singh is Rahul Gandhi. As a Congress insider contends, the “climb- down” that Rahul Gandhi had to make in publicly acknowledging that Amarinder Singh is in control in Punjab and that Sidhu had better listen to him is “sort of unprecedented”. Sidhu’s reaction came in response to a question whether Captain Singh had been against Sidhu going to Pakistan for the Kartarpur Corridor’s ground-breaking ceremony.

That the Gandhis have kept Amarinder Singh in good humour is no secret. “But contrary to the decades-long tradition in the family-dominated party of the High Command calling the shots, publicly making an admission that a regional heavyweight needs to be placated made the party leadership vulnerable,” says a Chandigarh-based Congress leader who had earlier asked Sidhu to quit over his disparaging comments on Singh. “The new reality that inspired a change in equations between the family and powerful regional leaders came to the fore thanks to Sidhu, who made preposterous remarks in his trademark style of playing to the gallery,” says this leader. Sidhu had to soon retract his words to steer clear of a major political crisis in his career and state that Singh was an avuncular figure for him.

True, Sidhu has his pluses: he has endeared himself to Pakistan with his dramatic peace posturing and excessive display of friendship with Pakistan Prime Minister Imran Khan, the former cricketing legend. In the neighbouring country, he has earned plaudits for trying to normalise India-Pakistan relations, says Lahore-based columnist and writer Mehr Tarar. “Sidhu is friends with Imran Khan, and he is very open about it. Through his friendship with Khan, Sidhu is doing his best to humanise the India-Pakistan relationship. Things must change for the two countries to be at peace, to be able to work together on issues of bilateral interests, to forgo the past and build on positivity between individuals and bring the two countries together,” she adds.

Being a darling in Pakistan, however, could be a burden in India, as his party is beginning to discover. Not surprisingly, a television channel ran a fake video of alleged slogans in support of Pakistan at his rally in Rajasthan’s Alwar district. For his part, Sidhu said he had said ‘Jo bole so nihaal ’, but it was shown as words in favour of Pakistan in the video; he now plans to file a defamation case against the TV channel. “Perceptions tend to stick, especially when polls are around. In that sense, he is becoming a burden for the party,” adds the Congress leader. Sidhu joined the Congress after a fallow period following his exit from the BJP, which had named him to the Rajya Sabha in 2016. The former cricketer who has acted in movies and appeared on numerous TV shows had represented the Amritsar seat in the Lok Sabha for the BJP from 2004 to 2014, the year he had to step down to make way for Arun Jaitley (now Finance Minister) to contest that seat. Sidhu refused to fight from any other seat that year. He didn’t openly disclose then that he was upset with Jaitley’s candidacy from Amritsar. In fact, he told everyone that the senior lawyer-politician who had helped him out when he was in dire straits was his mentor. Yet, his frustration over being ‘denied’ the Amritsar seat by the BJP soon began to surface. Two years later, he left the party, flirted with the Aam Aadmi Party (AAP), floated a new political outfit briefly, and then joined the Congress shortly afterwards.

LIKE HIS POLITICAL sound bites, he has often left one amused, irritated or annoyed with his bombastic cricket commentaries and one-liners, at times bordering on the bizarre. Incidentally, those who have known him since the beginning of his cricket career in the early 1980s say he was much quieter then. When he got national attention in his 1983 Test debut, he was dubbed a ‘strokeless wonder’. In 1987, however, when India played Australia, he hit sixes against spinners and earned the tag of ‘Sixer Sidhu’.

Not being a seasoned politician who is shrewd enough to speak with caution, Sidhu tends to falter under pressure

In the 1990s, when India did not have a good opener, Sidhu along with Manoj Prabhakar were made opening batsmen. The two bonded well. A senior journalist recalls how Sidhu was one man in the team who was seen reading books, mostly different types of fiction. He was friendly and would often chat with journalists. He was rarely aggressive. In a crowd, he could easily go unnoticed.

Like in politics, in cricket, too, he made friends and foes and friends- turned-foes, or vice-versa. In 1996, in an India-versus-Sri Lanka match, he fell out with Mohammad Azharuddin, who was captain then. He was soon dropped from the team for a crucial India-versus-Sri Lanka match. Sachin Tendulkar scored 100, but India lost. Later the same year, when the Indian team went on a tour of England, Sidhu had a major altercation with Azhar and walked out of the team. While he had inimical relations with Azhar, Sidhu remains a great Tendulkar fan.

Before the 1996 World Cup, Sri Lanka was to play host with India and Pakistan. There was a blast in Sri Lanka and Australia and West Indies refused to go there. India and Pakistan sent a combined team to play an exhibition game in Sri Lanka to show solidarity with the co-hosts. According to a report, Sidhu was allowed to enter Sri Lanka without a passport, which had been confiscated by the court after he and his friend Rupinder Singh Sandhu were accused in the murder of Gurnam Singh, a case in which both were acquitted in May this year.

In the late 1990s, after retiring from cricket, he took up commentary big time, rubbing shoulders with the best in the world, including the likes of Geoffrey Boycott. This is when he went in for a complete makeover, not only of his own image but that of cricket commentary. You could mute the sound or increase the volume, or you could hate it or love it. For this, he earned no tag.

Meanwhile, BJP National Secretary Tarun Chugh, who is from Amritsar, describes Sidhu’s political journey as opportunistic. “Arun Jaitleyji brought him into politics. Sidhu used to call him his guru. From a commentator, he became a political leader. Sidhu used to say he is Atal Bihari Vajpayeeji’s sipahi (soldier). But he did not even come to Delhi for his last rites when he died recently. Then AAP leader Arvind Kejriwal became his boss of sorts. Now Rahul Gandhi is his captain. And Imran Khan is also his captain,” he says.

Sidhu, who is a motormouth to many and wordsmith to others, is still used by the Congress for ongoing election campaigns in what looks like an effort to tap his abilities to the fullest. Of course, he does have many advantages: his face has an immediate recall value, since this top-order batsman has had an all-rounder’s appeal as a commentator and TV personality. He also has got the gift of the gab—words come out of his mouth like bullets from a machine gun. Not being a seasoned politician who is typically shrewd enough to speak with calculated caution, Sidhu tends to falter at times under constant pressure to perform and while looking for newer ways to strike a chord with people, much to the anguish of his party.

Says Pramod Kumar, a Chandigarh- based political analyst: “Sidhu has excelled as an entertainer, no doubt. And the transition from being an entertainer to a politician has overburdened him, especially when he has to deal with complex issues like peace building. If such people falter, it’s not surprising. It only makes you laugh. At the end of the day, he is a superb entertainer.”

Kumar adds, “To play in Punjab’s politics requires an art not to get trapped in radical politics and divisive designs of external forces like Pakistan. Sidhu being clueless about it is understandable, as his politics is more personal than ideological. So Imran Khan becomes a farishta (angel) for him. Driven by anti-Badalism [or his aversion to the Badal family that ruled Punjab for years], he moved away from the BJP. When in Congress he talks of 2002 (Gujarat riots) and in BJP, he remembers 1984 (Delhi anti-Sikh genocide). His constituency keeps shifting. He is an ideologically free politician who represents a lunatic fringe of a pendulum.”

Perhaps it is tough being Sidhu, especially with the mask of a tireless performer on.