The family bias in Indian politics 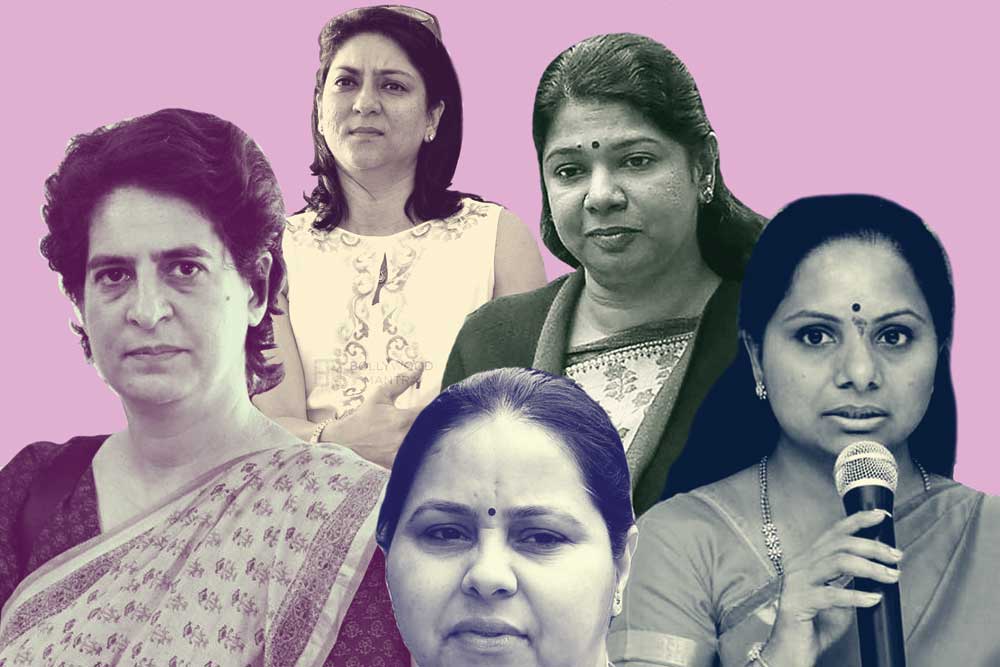 AN OLD ASSOCIATE of Lalu Yadav speaks of the time Sadhu Yadav was not allowed into the home of the former Bihar chief minister (and his brother-in-law) upon the instructions of a young Misa Bharti. That was when her mother Rabri Devi was ceremonial chief minister, with father Lalu being convicted in the fodder scam. Cut to 2019, when Misa had to wait patiently, biting her tongue and controlling her temper, till her name was announced as Lok Sabha candidate from Pataliputra by her party, now run by her younger brother, Tejashwi. Ever since Lalu Yadav announced in 2015 that “uttaradhikari baap ka beta hi hota hai,” it has been clear that Tejashwi will be his political heir, though he is neither the eldest (his brother Tej Pratap is) nor the most educated (Misa, a member of the Rajya Sabha since 2016, has an MBBS degree).

But like most political families in the country, when it comes to succession, brothers have been chosen over sisters, even if they’re not always the most charismatic or credible. Nowhere is this more obvious than in the Congress Party where despite late Congressman Makhan Lal Fotedar’s controversial claim in his 2015 book, The Chinar Leaves, that Indira Gandhi saw Priyanka as her political heir, when Sonia Gandhi was faced with a seemingly invincible BJP with the 2004 General Election around the corner, she chose to ask Rahul Gandhi to return from London, leaving his job at consulting firm, Monitor Group. “Though several people saw in this a typical Italian mother’s obsession with the son, I think it was more a function of Priyanka being mother to two young children and being unable to spare the time needed for politics,” says long-time Nehru-Gandhi observer Rasheed Kidwai.

Throughout his political career, the younger Priyanka has been Rahul’s invisible competition, echoing with ease her grandmother’s magic in her speech, her persona and her deliberately chosen dress code. Though she was finally inducted into the Congress as general secretary earlier this year, with both her children having grown up, and has been dutifully taking on the BJP in rallies and roadshows, it has been on her brother’s terms.

Brothers over sisters is the pattern in all recent successions. Take the case of K Chandrashekar Rao, whose son and daughter, KT Rama Rao and Kavitha Kalvakuntala (significantly, she continues to use her paternal surname), spent some time in the US and acquired the glib sales talk that helped him grow his party, TRS. But their roles are distinct. KTR is the party’s working president while Kavitha is in charge of the cultural wing Jagruthi and networks among the non-resident Telangana people in the US. He is grooming the son to slip into the saddle just in case he has to quit as chief minister to essay a large role in a rainbow coalition in Delhi depending on the outcome of the Lok Sabha polls. At the same time, he hopes Kavitha will become a Union minister. Call it the M Karunanidhi model of maintaining family harmony, which ensured that political heir MK Stalin’s power grew unrivalled in the state while half-sister and literary heir Kanimozhi took care of the party’s interests at the Centre. It was what landed her in Tihar Jail as an accused in the 2G case. But the arrangement seems to be sustainable, with Kanimozhi, now acquitted, fighting elections from Thoothukudi, Tamil Nadu, and Stalin handling party matters.

Usually, sisters have taken over the political legacy only when there is no alternative. In the case of Priya Dutt and Poonam Mahajan (both facing off against each other in the Mumbai North Central constituency), their brothers managed to undo their chances by disgracing themselves. Dutt’s brother, actor Sanjay Dutt, has spent much of the last 26 years in and out of prison on charges of abetting terrorists in the 1992-93 Mumbai blasts case. In 2009, at the behest of Amar Singh, he joined the Samajwadi Party and would have contested from Lucknow, had the Supreme Court not ruled otherwise. Though he did say in an interview on Aap ki Adalat later that “Dutt khandaan ke khoon mein Congress hain” and that he would be happy to step into politics if asked by the party, that never happened. Instead, this time he was by the side of sister Priya as she filed her nomination and promised to do as he was told by her. Poonam, in contrast, has kept her distance from her brother Rahul Mahajan, who got embroiled in a drug scandal that saw the death of his father Pramod Mahajan’s chief aide Bibek Moitra. Ironically just a little before this happened, he was to be inducted into the BJP after his father was murdered. Rahul even had a much publicised lunch with his father’s former colleagues at the BJP national executive meet in Delhi.

Sociologist Maitrayee Chaudhuri says this preference for brothers, unless they are a liability or don’t exist (as in the case of Supriya Pawar), falls within the idea of the broader patriarchal structure where the son is the family and the daughter is “paraya dhan”, which in kinship terms means she belongs to another lineage. Sometimes this gets skewed, as in the case of Indira Gandhi, but here too it has to be within the patrilineal framework where she is constantly referred to as a Nehru-Gandhi, invoking her patrimony. Much like Mehbooba Mufti, who was asked to contest the Bijbehara seat in the 1996 Assembly elections when Mufti Mohammad Sayeed joined the Congress—her brother Tassaduq was underage. Though Tassaduq did eventually join the party Mufti had launched in 1999, People’s Democratic Party, his sister was very much his boss.

What happens when power flows directly from the matriarch, who is less custodian of family interests like Sonia Gandhi, and more a king-maker like Gwalior’s erstwhile Rajmata, the formidable Vijayaraje Scindia? Look no further than the studied rise of Vasundhara Raje, who embodied her mother’s aspirations after the powerful Rajmata fell out with her son Madhavrao Scindia, who left the Jan Sangh to join the Congress much to his mother’s disgust. By 1984, Vasundhara was member of the BJP national executive; in 1989 she was an MP; by 1998 she was Union Minister of State; and by 2003 chief minister of Rajasthan, a feat she was to repeat in 2013.

Who knows what her career graph would have looked like if the personal and political had not divided the Rajmata and her only son.