The RSS is not known to seek validation by outsiders, but the furore over Pranab Mukherjee’s visit to its headquarters reveals a failure to appreciate its acceptability today 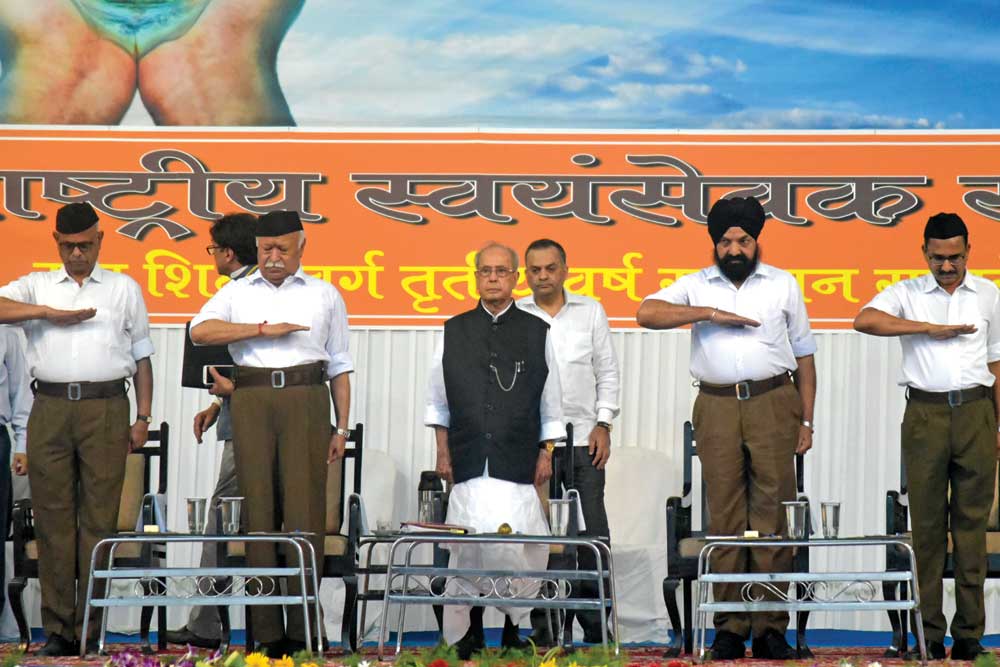 THERE WAS SOMETHING about former President Pranab Mukherjee’s visit to the headquarters of the Rashtriya Swayamsevak Sangh (RSS) in Nagpur on June 7th that observers could not get enough of. It is unlikely that Mukherjee ever met the RSS founder KB Hedgewar in person, but the crossing of their paths was very real: the former president described him as a ‘great son of Mother India’, words that incensed ‘secular’ politicians no end in the days that followed.

This was not the first time that the organisation had invited an ‘outsider’ as a guest to one of its key functions—a ceremony marking the completion of training for its senior cadres—but it certainly attracted controversy way beyond any such event in the past. Some said that the RSS had been given publicity as never before, while others argued that the event had legitimised the organisation. As is often the case with such political tempests in India, the gap between reality and rhetoric is large.

Mukherjee’s speech was standard fare for the most part. “The soul of India resides in pluralism and tolerance,” the 13th President said, softly but firmly. “This plurality of our society has come through assimilation of ideas over centuries,” he added, “Secularism and inclusion are a matter of faith for us. It is our composite culture which makes us into one nation.”

On a regular day in India’s TV studios, or on the usual op-ed pages, or in any other public setting, this would be music to the guardians of India’s ideological frontiers. Mukherjee had more to offer along those lines: “Manifestations of rage are tearing our social fabric. Every day, we see increased violence around us…We must free our public discourse from all forms of violence, physical as well as verbal. Only a non-violent society can ensure the participation of all sections of people in the democratic process, especially the marginalised and the dispossessed. We must move from anger, violence, and conflict to peace, harmony and happiness.” If anything, these could be read as oblique hints of criticism of the present dispensation at the Centre.

The former President, however, did not limit himself to these political homilies and went on to highlight the contribution of Sardar Vallabhbhai Patel in forging a modern India. He also added that, “Many dynasties ruled till 12th century when Muslim invaders captured Delhi and successive dynasties ruled for the next 300 years.” Taken together with his homage to Hedgewar, this was enough to draw a flurry of criticism.

The real show stealer, however, was the speech by RSS Sarsanghchalak Mohan Bhagwat. For someone who claims to be heading an apolitical organisation, Bhagwat’s address was highly political, aimed as it appeared to be at defanging Mukherjee’s predictable bits on inclusiveness, tolerance and democracy. He was far more expansive on all these lofty themes than Mukherjee himself was. This was in keeping with the RSS’s known claims of being an inclusive and tolerant outfit, but on that particular evening, it served the purpose of neutralising the ‘Pranab holds tolerance mirror to RSS’ type of spin that many would have liked to give the proceedings in Nagpur.

Viewed dispassionately, Mukherjee’s speech—watched by millions of Indians glued to TV sets—was nothing out of the blue. It could have been something straight out of the pages of a tome penned by a Tara Chand or even a Pattabhi Sitaramayya. But for a section of intellectuals and political partisans of the Congress, what Mukherjee said bordered on sacrilege. For them, any talk of ‘Muslim invaders’— a historical fact—is taboo. When combined with a mention of Patel, the entire subject becomes radioactive.

That is exactly what happened when reactions to what Mukherjee said began being aired, even as he was winding up his speech. At one extreme, vulgar punditry began almost instantaneously on social media. At the other end began a hunt for ameliorative words and phrases in his lecture. Mukherjee said, “The construct of Indian nationalism is ‘constitutional patriotism’, which consists of an appreciation of our inherited and shared diversity…” One public intellectual was quick to point this out as his ‘most important statement’ as it clearly meant that Indian nationalism is based on India’s Constitution. This, of course, makes nonsense of the sequence in which the two came about: India as a nation—and even before that, Indian nationalism— emerged much before the first word of the Constitution was even written. But such is the acute fear—and disdain— of a rightist conception of Indian nationalism that clutching at anything that can work against the idea is normal now.

Indians have accepted RSS as an organisation active in social and cultural work. This is what alarms those who dub it a danger to democracy

It was also held in the next few days that Mukherjee had given the RSS the oxygen of publicity that it so craved. This is a strange claim to make. The RSS has never looked for validation from anyone. After all, the BJP not only runs the Union Government, but holds power in most states as well. What irks commentators and intellectuals alike is that their invisible lines have been crossed. For one, with each passing month and year, the degree of ostracism the RSS faced in its 93-year history is going down. Mukherjee’s visit did not lead to this state of acceptance but it was a visible confirmation—like the breaking of a mirror that serves as a reminder of reality— of how much things have changed. And when political images get shattered, the sight is not always pleasant.

The reaction of the Congress party— to which Mukherjee once belonged— was equally hollow. The various appeals, letters, petitions urging him not to go to Nagpur were hypocritical in their own way: Once a person assumes the office of President, he ceases to be a participant in party politics, and this holds so even after the individual demits it. The manner in which the Congress reacted to the event showed that it has not come to terms with that reality.

The real reason why any engagement with the RSS attracts opprobrium is the post-Ayodhya (1992) categorisation of the organisation as a menace to democracy and even as a ‘fascist’ outfit. Cursory reflection shows this as not only misplaced but mischievous. At no point in its history has the RSS advocated overthrowing democracy. The label ‘fascist’ is laughable: the severe crisis of capitalism in the inter-war period that led to a breakdown of democracy in Europe has never been seen again in the world. To talk of a sinister organisation running riot in a country where economic growth routinely exceeds 7 per cent every year, where civil society, a free press and other institutions often hem the functioning of governments, is a plain misreading of facts that also betrays a lack of understanding.

But beyond the realm of ideas lies a practical world. Over time, Indians have come to accept the RSS as just another organisation that is engaged in different kinds of social and cultural work. This ‘normalisation’ is what alarms those who dub the RSS a danger to democracy. Today, some of the most important people in government have RSS backgrounds: President Ram Nath Kovind and Prime Minister Narendra Modi are notable examples. Has that made India undemocratic or subverted what the country stands for? No. Politics is not even the primary focus of RSS activity. The organisation does lend the BJP its personnel—at the level of pracharaks and others—for political tasks, but those are only temporary assignments.

The actual work of the RSS is largely social and cultural. To give one example, long before the Government was able to spread its educational infrastructure in the Northeast in a meaningful way, during the 1950s alone, the RSS and its affiliates brought a number of the region’s school-going children to other parts of the country—and big cities like Bombay— where quality educational facilities existed. Over time, its other institutions, such as the Vanvasi Kalyan Ashram and Vidya Bharati, stepped in for the cause of people’s upliftment. The ground work done by these has gone a long way in ensuring that RSS is seen as a social organisation and not viewed with mistrust, in spite of sustained propaganda against it.

Why Indians view the RSS in positive light is almost never spoken about either within the scholarly community—where its image as an extremist Hindu organisation continues to be fashionable—and among opinion makers. Historically, the RSS saw a rise in its membership during Partition, when millions of Hindus were displaced in the Subcontinent. The number of its members and count of shakhas (branches) in 1947 was exceeded only in 1970, after a gap of 23 years. Stressful conditions have been a significant motivating factor for people joining the RSS. Since 1980—and especially after 1989— its membership has taken an upward trajectory. These were years when India was subjected to terrorist attacks from Pakistan, when Kashmir got embroiled in an insurgency sponsored from across the border. These and a host of other anxieties about India’s territorial integrity, communal violence after 1993, and, by the turn of the century, aggressive secularisation in a country that is deeply conservative, were left largely unaddressed. To each of these phenomena, an uneasy political silence was the seeming response.

In contrast, liberal intellectual opinion continues to harp on themes like ‘fascism’, ‘Hindu extremism’—and after 2009, alleged ‘saffron terror’. These have not gone down well among Indians and a part of the response has been a groundswell of support for rightist politics.

The overall result is a huge gap between the lived reality of organisations such as the RSS and the intellectual tropes being used to describe it. Matters have gone so far that the RSS is now seen almost exclusively in terms of an ‘other’ to describe what liberal India is not.

It took a recent conversation in faraway London between Yogendra Yadav and Amartya Sen to highlight this state of affairs. Yadav was candid when he said that to his mind, “the biggest failure of secularism has been to not sustain a conversation with the ordinary Hindu… I think over the last 70 years, we have forgotten to sustain that conversation.”

Beyond the brouhaha, Mukherjee’s visit and the reactions to it raise many questions that have no satisfactory answers. Consider the question of engagement with the RSS. For much of Independent India’s history, any contact with the Nagpur-based organisation has been considered taboo. This has had its own share of twists and turns. For example, in 1949 Jayaprakash Narayan was one of the political leaders opposed to lifting the ban on the organisation that was imposed after the assassination of Mahatma Gandhi. Yet, three decades later, Narayan had no compunction in seeking RSS help in his fight against Indira Gandhi of the Congress. Even if one ignores the actual interactions of politics in practice, does it make any sense to declare an organisation that is undoubtedly nationalist a pariah but make vociferous demands for talks with entities ranging from Pakistan to the Hurriyat Conference that routinely decry India? No doubt, some counter-argument could be found for it. But that does not rob the substance of the question: why single out the RSS for this treatment? This, however, remains a question that no one in ‘secular India’ wants to answer.