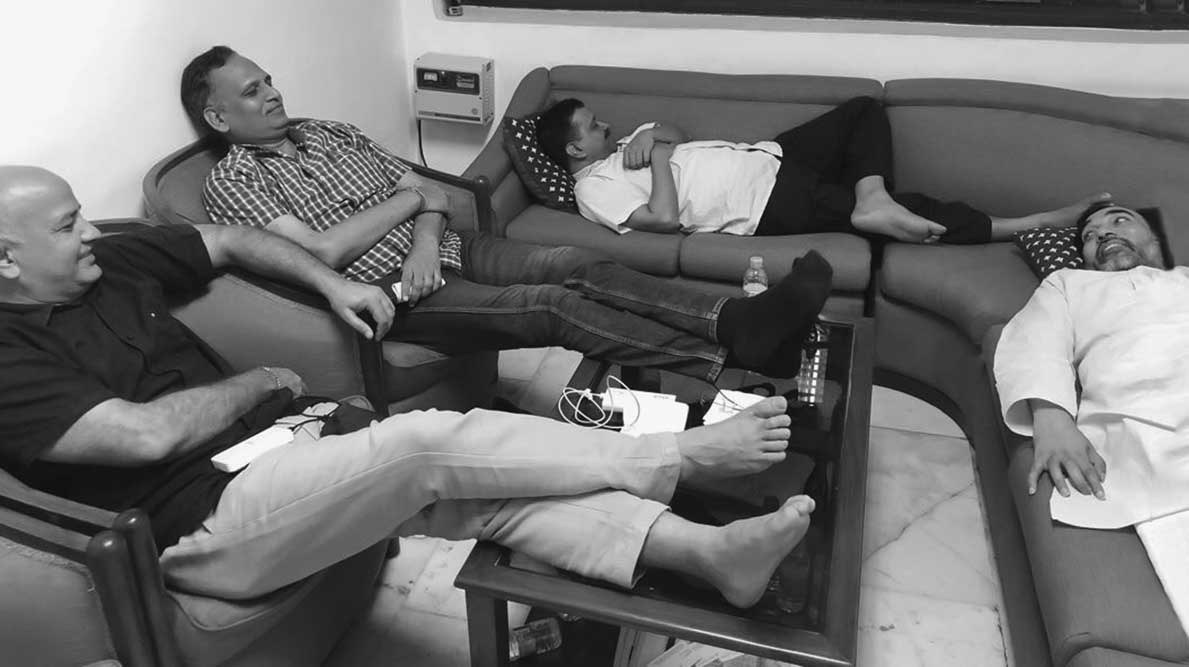 NINE DAYS AFTER Delhi Chief Minister launched a sit-in protest at Lieutenant Governor Anil Baijal’s office, he withdrew tamely—on June 19th. On paper, one of the sticking points highlighted by Arvind Kejriwal and his Aam Aadmi Party (AAP), the so-called ‘strike’ against his government by civil servants, had been resolved. In reality, it was not even a fig leaf. As a political move, the Chief Minister’s effort had fizzled out soon after it began. The withdrawal was just a way to end an embarrassing episode.

On June 11th, the Lieutenant Governor’s office witnessed a silent invasion of sorts when Kejriwal and three of his cabinet colleagues—Deputy Chief Minister Manish Sisodia and ministers Satyender Jain, Gopal Rai—began a round-the-clock demonstration. This was a measure of last resort, Kejriwal said, against two major problems that had hobbled the functioning of Delhi’s government. At the heart of it was the alleged non-cooperation of administrative officers in Delhi. Another issue was the denial of permission to the state government to go ahead with a controversial scheme to deliver rations of the Public Distribution System (PDS) to eligible persons at their doorstep. As the sit-in progressed, an old demand—full statehood for Delhi—was reiterated as an add-on, giving the demonstration a sharp political bearing to go with the earlier reasons cited.

Five days after it began, the real colour of it became clear when four chief ministers—Mamata Banerjee of West Bengal, Pinarayi Vijayan of Kerala, N Chandrababu Naidu of Andhra Pradesh and HD Kumaraswamy of Karnataka—showed up to express support for AAP’s protest. The four tried to meet Kejriwal but were denied permission to enter the Lieutenant Governor’s office, something that was made much of by AAP. The presence of other state leaders—who were in Delhi for a Niti Aayog meeting—was used to pitch the protest onto an older and larger plank: an issue of interference by the Centre in the affairs of a state government using that alleged ‘instrument’, the governor. Accordingly, they urged the Prime Minister to ‘resolve’ Delhi’s problems in the ‘spirit of federalism’.

Delhi’s problems, if anything, are far more prosaic than the matter of high politics they are made to sound like. The ‘strike’ by civil servants in Delhi is a case in point. Since February 19th, relations between the AAP government and its officers have been testy. This happened after Delhi’s Chief Secretary Anshu Prakash was allegedly assaulted at Kejriwal’s residence where Prakash had been summoned for a late-night meeting. The investigation of this case—which is still in progress—is another red rag for the AAP government. Since February, AAP has claimed that Delhi officers have struck work, alleging that this has been done at the behest of the Prime Minister’s Office (PMO). In reality, the officers did no such thing—neither by taking leave, nor by any ‘go slow’ tactics. At an unprecedented press conference held on June 15th, Indian Administrative Service (IAS) officers assigned to Delhi said they had been at work every day, regularly. Their apprehensions, according to senior officer Varsha Joshi, were related to safety, the incident with Prakash having left them rattled. The officers stated that they had attended all statutory meetings, including those of the cabinet and for preparing Delhi’s budget. They were ‘missing’ only from meetings with individual ministers. AAP’s definition of a ‘strike’ is rather expansive, it’s clear, and often couched in the language of supremacy of elected officials over the permanent executive.

THE OTHER CONTENTIOUS point was the doorstep ration delivery scheme that was put on hold by the Lieutenant Governor on March 22nd. Baijal’s instructions to the AAP government were simple: apprise the Union Government of the scheme’s details before taking a final decision. If anything, the episode illustrates the perils of shifting administrative decisions. In January this year, the Delhi government decided to use biometrics while selling rations. This was meant to check the massive siphoning of rations from fair price shops that retail items like sugar, wheat and rice. The use of electronic Point of Sale (e-POS) devices was okayed after a cabinet decision that was approved by Baijal. The trouble with this system was that sometimes biometric identification failed. To obviate its need, one option was to deliver commodities to the homes of eligible beneficiaries with verifiable addresses. Officers, however, pointed out the logistical challenges inherent in any such scheme.

Instead of considering these issues from an administrative perspective, AAP functionaries began saying there was a ‘ration mafia’ in the city that did not want an ambitious project to take off. They also accused officers of withholding cooperation.

These are hardly the kind of issues that merit a dharna of the kind that Kejriwal and his colleagues resorted to. Differences over administrative measures are not unusual in any government, but all have inbuilt mechanisms to resolve them without letting them spill over into the public domain. But in this case, the nature of the problem is different. The present Delhi government was formed by activists who turned into politicians overnight and had little experience of running a government before they assumed power. When seen with the kind of activism they practiced—as anti-corruption crusaders who believed that much was wrong with the way India is run—it was only a matter of time that a clash would ensue with civil servants who are pragmatic professionals rather than revolutionaries. In contrast, AAP activists have always felt cheated that they do not have full control over Delhi—especially the police department, apart from other elements of the administrative system. This has resulted in the party levelling ‘conspiracy’ charges—with little proof—against the Union Government and civil servants.

It is true that Delhi has a unique arrangement for its administration. It has an elected government that must have the confidence of a legislative assembly, like other states, but does not enjoy all the usual trappings of regular statehood. Article 239AA of the Constitution spells this out clearly. The limitations on the legislative power of the Assembly are specified in Article 239AA 3(a), while the somewhat expanded powers of the Lieutenant Governor—in comparison to other similarly placed administrators of Union Territories—are detailed in Article 239AA (4). This extraordinary situation is, in part, due to the fact that Delhi is also the country’s capital and thus the nerve centre of national governance. Some friction in the distribution of authority is natural in such a setting and has been observed in other capitals across the world as well. Ever since Delhi was declared a state in 1992, it has seen a number of governments led by the Congress and BJP. In many instances, the state government has been led by one party while the Central Government has been controlled by another. A notable example is that of Sheila Dikshit, the Congress leader who was Chief Minister from 1998 until 2013, a period that included the six years that BJP’s Atal Bihari Vajpayee was Prime Minister. The few differences that arose between Dikshit’s government and the Lieutenant Governor then were resolved ‘in house’, so to speak.

As for Delhi’s present government, the differences have been magnified in almost every respect—ranging from public verbal duels and name calling (on AAP’s part), all the way to litigation over the extent of the Lieutenant Governor’s authority. This has not worked. In 2016, the Delhi High Court ruled that the Lieutenant Governor was the administrative head of the capital and that it continued to be a Union Territory. The case arose from the Kejriwal government’s move to order probes of alleged irregularities in the working of the Delhi and District Cricket Association (DDCA) and a few other matters. These decisions were struck down by the High Court as they did not have the Lieutenant Governor’s approval. At that time, once the court had delivered its verdict, Sisodia had called it a battle between ‘the elected’ and ‘the selected’. The Delhi government appealed against the case in the Supreme Court, where a decision is still pending.

The trouble with the Kejriwal government is that it has spent precious time and political capital on needless battles. In the last quarter century, Delhi has seen tremendous developments, ranging from the setting up of a modern mass rapid transport system—the Delhi Metro—to a population explosion caused largely by migration from other parts of the country. All have been managed by its government without the panoply of powers that accompany complete statehood. It is worth asking whether this shift in status would have made a major difference to the fortunes of Delhi, as AAP claims. What needs examination is why the party wants those powers. In the meantime, India’s first experiment with a civil society organisation transforming itself into a political party and even winning power in a state is flailing.