Campus Culture Wars and the Trivialisation of an Ideal 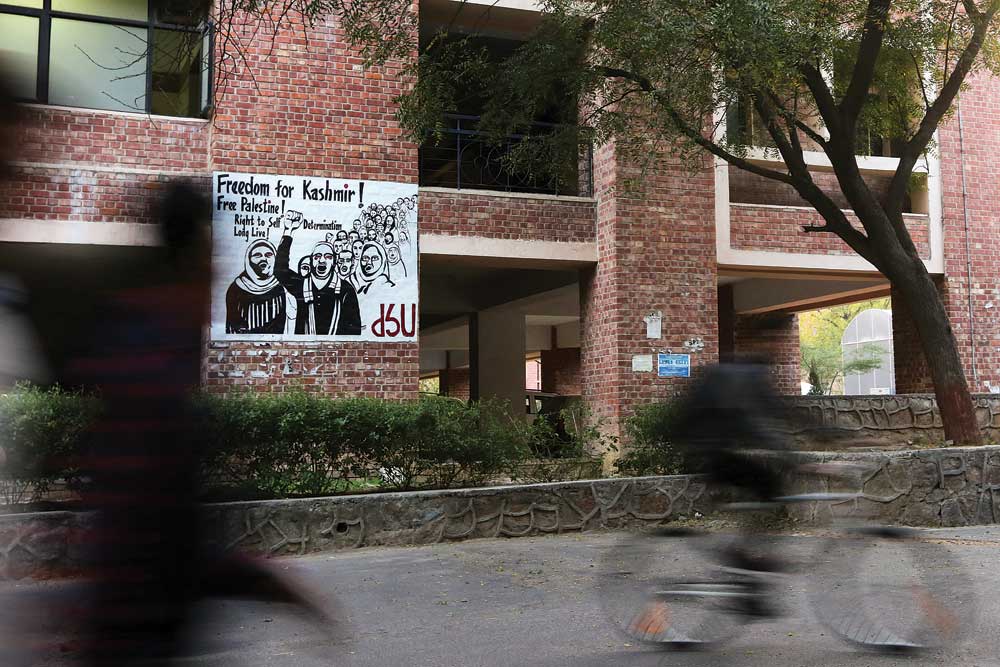 DELHI WAS SUBJECTED to a strange spectacle recently: a series of unrelated events that began with a cancelled seminar at Ramjas College in Delhi University and ended with a social media storm after a tweet by a young woman. What tied it all together was the claim that ‘freedom of speech’ was in peril in India.

It all began on a day in February when a seminar on ‘Cultures of Protest’ that was to feature Umar Khalid, a Jawaharlal Nehru University (JNU) student once charged with sedition, was cancelled allegedly under pressure from the ABVP, a student union affiliated with the BJP. The day after the event was cancelled, ‘pro- freedom’ students took out a march on the campus where, allegedly, slogans favouring independence for Kashmir were chanted. Within no time, chaos gripped the University. A counter-march by the ABVP on a tense campus worsened matters. If this were not enough, a social media post by Gurmehar Kaur, a student of Lady Shriram College (LSR) and daughter of an Army officer killed in action, took the situation seemingly to a point of no return. Allegations, counter-allegations and bitterness of a kind seldom seen marked the latest round of student unrest in the capital. Then, as suddenly as it all began, the episode cooled down.

All this is reminiscent of earlier ‘protests’ by writers returning awards in 2015 and the week of rage in JNU last year when anti-India slogans became fashionable. Perhaps the most vexed issue in all these controversies—ranging from the events of February 9th last year at JNU where ‘azaadi’ slogans were allegedly raised to the latest brouhaha at Delhi University—is that of freedom of speech. From the number of thwarted academic programmes in the Delhi area—where ‘contentious’ topics were to be discussed—a conclusion can be drawn that free speech stands imperilled in India. Matters are, however, more complicated.

In JNU, amid the lush expanse of its campus, a professor at one of its relatively liberal (read: non-Left dominated) schools explains the complexity of the debate beyond the simple ‘the state wants to crush dissent’ one-liner. In academic settings, the search for excellence requires questioning almost everything that comes one’s way. That is essential for new discoveries to be made and solutions to be found for problems. The liberty to raise slogans such as ‘freedom of Kashmir’ squarely falls within this domain of freedom. “I would be fine with the slogans on Kashmir. But the issue is that what has taken place here has skirted the boundary of incitement. Now that is not acceptable. It is difficult to make a judgment where one (freedom of speech) ends and incitement (in Kashmir) begins,” says the professor.

How much of a problem is this? Is there evidence that the shouting of slogans does incite violence elsewhere—in Kashmir, for example?

Open reached out to a government officer closely involved with such matters and asked him if JNU-like events pose a danger to security. “If you ask me about the existence of a link between shouting slogans for ‘freedom for Kashmir’ and secessionists being emboldened in Jammu and Kashmir, I cannot prove this in the manner of a law court. But if you ask me whether this emboldens militants, yes it certainly does,” he says.

This is a treacherous domain where a vital freedom can turn into something dangerous for the country on one side, and on the other any attempt to ‘squeeze’ freedom appears to militate against what distinguishes India from many other developing countries where precious freedoms have been sacrificed. “Take the case of ‘freedom for Kashmir’,” the JNU professor says, “It has a very weak case when seen from legal, political and historical perspectives. There is overwhelming evidence that India is on the right side and there is little merit for so-called azaadi there.” The trouble, this scholar says, is that by shouting down academics who want to say something in favour of letting Kashmir go its own way, we only give them more credit than they deserve on a scholarly plane.

BEYOND THE SINGLE substantive issue of freedom of speech, these protests show something much more mundane. First, they are triggered by single events and lead to an escalation and counter-escalation that dies down as quickly as the flare-up. In the instant case, after the seminar at Ramjas College was cancelled, a huge rally by the ‘pro-freedom’ group was followed by a counter-rally a day later by students affiliated to the ABVP. Then, within a week, Delhi University returned to normalcy. Two, these protestsare largely Delhi-centric. With the exception of protests in Hyderabad University after Rohith Vemula committed suicide, campuses across India have remained peaceful and students have gone about their regular activities: classes, exams and other work have continued unabated. Three, at the most mundane level, it is a simple fight between the Left’s student unions—which have little influence in Delhi outside JNU—and the ABVP, which has historically been strong in Delhi University, defending its campus turf. “It is not a serious ideological fight… it is designed to be oppositional. There are elements of opportunism in all this. But yes, there are other issues pertaining to academic work that have become hopelessly tangled in all this, ones that do not permit an easy solution,” says Rajesh Rajagopalan, a professor of international relations at JNU.

In recent weeks, one such matter has grabbed attention to an extent. In accordance with University Grants Commission (UGC) rules, JNU recently asked faculty members not to take on more than eight PhD students each. This was a normal academic-cum- administrative measure meant to streamline the functioning of the university and also improve the quality of academic output. This step, too, has been sucked into the political maelstrom of campus politics. Now, sinister motives are being imputed to what the university administration considered a purely academic matter.

Depending on one’s vantage, the events of the last two weeks appear to be either a case of India creeping towards ‘fascism’ (the Left’s view) or a matter of abiding with the idea of India as a nation- state whose boundaries ought to be respected (the ABVP’s).

There are historical echoes that show this ‘debate’ is not new. From the late 1940s until 1990, Leftists used to debate what was called the ‘nationalities question in India’. This was something that had been dutifully picked up from Soviet literature. The idea was simple: India is not one single nation but a clubbing together of various ‘nationalities’, each with distinct aspirations. This is the prism through which the ‘struggles’ in Punjab, Nagaland and J&K were viewed by the Left. It is another matter that in all these three troubled states, the so-called nationalities question was closely tied to religion, something the Left has found very hard to come to grips with. The result was a series of intellectual somersaults over the decades that led nowhere except some kind of melancholic longing for a ‘struggle’. In the meantime, Punjab returned to normalcy, as did Nagaland, leaving only Kashmir as the residual example.

But unlike the first wave of the debate on nationalism in India, this time around there is no care taken to build and argue a case for ‘different nationalities’ in India, but a cheap reduction of it to slogans and catechisms on the subject. ‘India is an occupying force in Kashmir’ and ‘Kashmir has been colonised by India’ are some of the Leftist slogans one hears on campuses. It requires no elaboration that these simplistic claims betray ignorance of what is a complex history. If earlier generations of Indian Marxists displayed some ‘scholarly’ engagement with nationalism, their successors are only adept at chanting what are mere slogans bereft of any analytical content.

“The question is no longer that of the Left or Right, but one of competence and rigour in arguments,” says Makarand Paranjape, another scholar who has been subjected to hooliganism by Leftist students recently.

More than half a century ago, the American historian Richard Hofstadter described a similar climate of mistrust in the US as ‘the paranoid style in American politics’. He was not questioning the mental status of those who made fantastic claims and dished out conspiracy theories, but the utterly fantastic air about it all. The ‘paranoid style’ was in rage soon after the Cold War began and lasted until after the defeat of the unconventional conservative Barry Goldwater in America’s 1964 presidential election.

It won’t be a stretch to say that India is experiencing its own ‘paranoid style’ these days—but on the Leftist end of the political spectrum. Since the start of 2014, when there were enough hints that Narendra Modi could become the Prime Minister of India, not a day goes by without some dire prognosis of doom. The common theme in all this is the coming end of various freedoms in India. But strangely, the louder these dire prophecies get, the weaker the claim of freedom in danger.