Where the people’s choice swings between hope and fear. Siddharth Singh reports from what was once a notorious Maoist village in Chhattisgarh 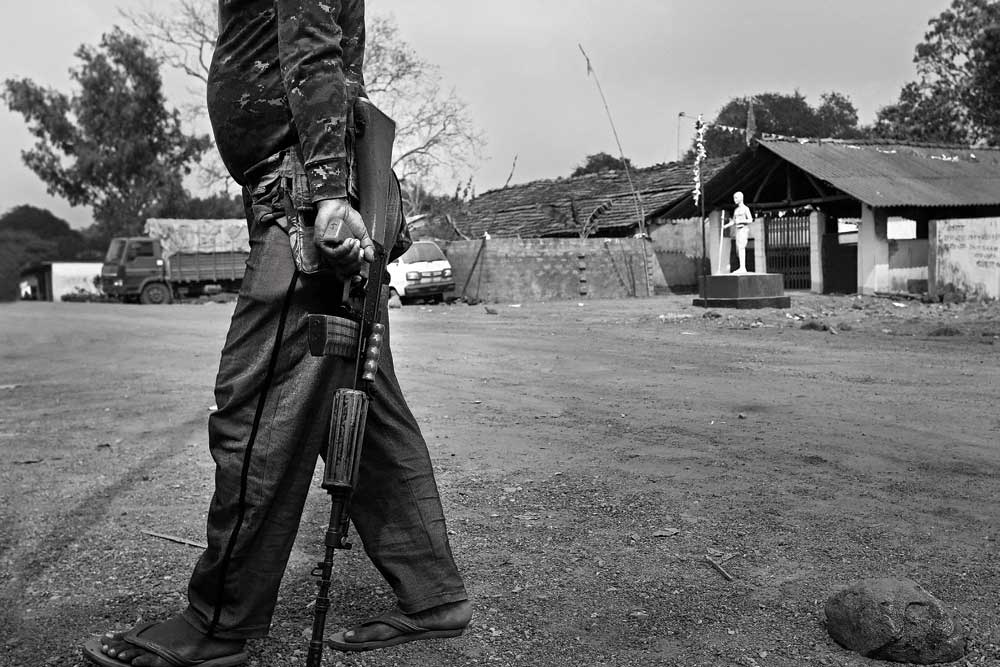 ELECTIONS ARE A tense time in Sukma. Until 2010, a sleepy hamlet deep in a Maoist-dominated part of Chhattisgarh, even the district was virtually inaccessible by road. Now that National Highway 30 is fully functional, there are other worries. On a cool October night, a district official worries where he will ‘accommodate’ a platoon of Central Reserve Police Force (CRPF) men who have reported at the district headquarters for election-related security duties. “I had no option but to send children away from their hostel back to their villages. For the next two months, all educational activities will come to a halt,” he says ruefully. It is a small sacrifice to keep democracy well oiled in this insurgency-hit district. To an extent, the security situation has improved in the last four to five years.

If the situation along NH 30 often approximates normalcy, the interior areas present a difficult scenario. Barely 100 km away from the district headquarters, the village of Jagargunda is a different world altogether. Until some years ago, it was not uncommon for officials to visit this isolated village by helicopter. At one time, it was well developed by Indian rural standards. A well-staffed hospital, hostels for school children and even a football field dotted the landscape. If its location was remote, a regular bus service compensated for that. Then the Maoists arrived. The hospital and hostels are now in ruins, entombed with moss. The doctors and staff ran away sometime between 2006 and 2009 when the intensity of the Salwa Judum campaign was at its peak. There is a road that links Dornapal, the local sub-division, with the village. Terming it a ‘road’, however, is stretching the word: it is a 70-km trail of undulating mass that turns into mush during rains, cutting off Jagargunda. It is also the time when Maoists call the shots. When the dry season returns, the only transport options are hardy vehicles that load men and material alike and then hope that nothing gets broken.

“It is not as if the Maoists and the Judum campaigners harmed anyone. But such was the fear that it was impossible for anyone to remain here with calm,” says a school teacher who remains in Jagargunda. “If you can overcome fear, you somehow manage to stay,” says the man who hails from Balaghat in Madhya Pradesh.

Jagargunda is more at peace today, but signs of that fearsome period still remain. The village is fenced with wiring and each of the four corners has an iron gate with a local security man armed with an Insas rifle hovering around. Few other villages in India have a similar setting. “At one time, this place was more a camp than a village. Residents from adjoining areas had all re-located here and even after the situation normalised, they refused to return to their villages,” says the inspector who mans the local police station. “Now, they go back to places such as Tarlaguda (about 5 km away), tend to their crops during daytime, but come back by the evening.” That is when the iron gates clang shut and the guns go up.

It is a matter of prestige for the government to ensure that voting takes place in places like Jagargunda. Located on one edge of Sukma and virtually equidistant from Dantewada and Bijapur, it takes some effort to ensure that. But it is decidedly easier than just a decade ago.

The dislocation this belt experiences is to be found in few other parts of India. This region’s very geography lends itself to Maoist tactics. During elections in this part of Chhattisgarh, this quickly overshadows ‘normal’ politics, as understood in terms of competition between individuals and political parties for power. Since the announcement of the state’s poll schedule by the Election Commission on October 6th, and the declaration of candidates by the BJP and Congress in mid-October, almost every day has seen some sort of Maoist propaganda against elections. In the last two odd weeks, it has gone up—along with violence. Bijapur district has seen a spurt of it since mid-October, when six Maoists were killed in two separate encounters within a week. On October 27th, four CRPF troopers were killed and two others were injured in an IED explosion in the district. Two days earlier, there was an exchange of fire between security personnel and Maoists near Chintabegunallah village near Jagargunda.

These activities are considered part and parcel of the cat and mouse game that heats up during electioneering in Bastar. On their part, the Sukma police have launched their ‘Tedmunta Bastar Abhiyan’ (Rising Bastar Campaign), an effort to showcase the humane aspects of policing. The programme aims to wean away villagers from Maoist influence by carrying out basic developmental tasks (such as providing solar lanterns and lighting) in villages that have been ‘cut off’ by Maoist presence. Often, the job of creating civic awareness—usually for politicians and civil administrators to do—perforce falls on the local police.

Chhattisgarh has a good reputation for welfare schemes that has helped the BJP-led Raman Singh government, but in Bastar it has limited appeal

At one recent event, the district police called a gathering of 600-700 villagers from Penta, Nagalgonda and Kosaguda villages to explain the importance of elections and why they must choose their representatives. This is an especially difficult task. For one, these villages lie on the Southern flank of the road that connects Dornapal to Jagargunda, an area still under Maoist sway. For another, even though these villages are not very far from Dornapal and are in the vicinity of CRPF camps, the psychological effect of Maoist dominance is so strong that it is unlikely they will cast their vote. The combination of geography and fear makes for a toxic mix that will take a while to be leached away.

Meanwhile, fear haunts not just the interiors of Bijapur, Dantewada and Sukma districts, but even relatively safe urban centres such as Kirandul and Bacheli, where a much more extensive security presence is not sufficient to assure people of their safety. On October 22nd, Maoists took apart posters and banners for an electoral rally at an isolated water pumping station near Mine No 5 of a National Mineral Development Corp complex, roughly 25-30 km up in the Bailadila hills from Bacheli town. Three days later, the Maoists literally painted this town red: vehicles parked around and some parts of the local railway station had messages painted in red calling for an election boycott. This was not aimed at Adivasis but local people who are involved in some way or other with mining activities. It sent the town into a tizzy.

These factors make politics a very different game in the seven districts of Bastar. In urban parts of an insurgency-hit zone, ample provision of security—an end to which the Union and state governments, EC and Central paramilitary forces leave no stone unturned— ensures that voting takes place as normally as possible. In rural pockets, it’s a more complex political and administrative challenge. In remote villages like Jagargunda, establishing voting booths is an effort in itself, one by which the administration needs to enforce its writ. But often, Maoist diktats end up scaring away voters. There have been instances in the interiors of Adivasis having returned home after casting their vote only to have their inked finger chopped off. The fear that such violence instills cannot be stated in words.

Particularly hard is for the administration to place polling booths deep inside heavily forested areas of habitation. One short- cut—at the cost of democracy—is to ‘bunch’ these booths and locate them closer to some urban centre. In the past, this has been done in the Abhujmad region of Narayanpur district that is home to probably one of the last great unsurveyed forests of India. At times, the polling stations for remote areas are located near urban centres like Pakhanjur in the adjoining Kanker district. In such cases, voting numbers fall not for lack of security—which is abundant— but because it is hard for Adivasis to trek 30-60 km just to vote. The classic political-economic claim that an individual gets negligible returns on casting a vote is starkly obvious in this area.

All this makes for a marked contrast between the working of political party programmes and platforms between Bastar and elsewhere in Chhattisgarh. The state has a well-deserved reputation for social welfare schemes, such as its relatively effective and corruption-free Public Distribution System (PDS). This has helped the BJP-led Raman Singh government in the past. In Bastar, however, it has limited appeal. Until very recently, the reach of the government in interior areas was constrained. Also, even when efforts were made to provide PDS rations, they had to be curtailed as Maoists began to siphon them off. A well reputed NGO was handed a part of the PDS operations in Narayanpur, for example, but it later had to be scaled back for this reason.

OLITICAL ACTIVITY BEARS a conservative hue in these parts. The competition for votes, for example, is of a lower intensity than in the rest of Chhattisgarh. No doubt, there is the usual jostling for party tickets, but political parties are more or less risk averse. In the first phase of electioneering—which involves 18 seats—the 12 seats of Bastar are seeing a virtual repeat of winning candidates being nominated again by their respective parties. Traditionally, the Congress has had an edge in this region for historical reasons. That continues to be the case, even if the contest between it and the BJP is now stronger. In Antagarh constituency in Kanker district, the BJP is giving a fight to the Congress. Another seat of interest is Dantewada, where Congress’ Devati Karma—the wife of slain leader Mahendra Karma—is pitted against BJP’s Bhima Mandavi. Both parties have ensured that rebels withdraw in favour of their official candidates. In Congress’ case, Dantewada has become more or less a family fight with Devati’s son, Chavindra Karma, rebelling. He withdrew after the party high command’s intervention. Something similar happened in the BJP’s case where the rebel Chetram Atami withdrew after Chief Minister Raman Singh intervened. The BJP also managed to get a rebel in Bijapur constituency—where its sitting legislator Mahesh Gagda is facing headwinds—to withdraw. In Dantewada, local politics now resembles the routine of many other Indian constituencies: political violence at the local level. Soon after the nomination process, a local Adivasi BJP leader was attacked brutally while he was sitting for a meal at his home in the evening. Some ‘Maoist’ leaflets claiming responsibility for the attack were found near his house. Local observers discount that as that is not the modus operandi of Maoists in dealing with their alleged ‘class enemies’.

In the end, it is a curious picture. Geography fuels insurgency and the latter in turn limits political options for people in the area. Politics acquires a patchy pattern: urban pockets, dominated by non-Adivasis see larger turnouts while far-flung villages remain quiet. There is none of the festival-like colour that elections throw up in other Indian constituencies. Local reputations, money and whatever passes in the name of influence do the heavy-lifting of politics in Bastar. 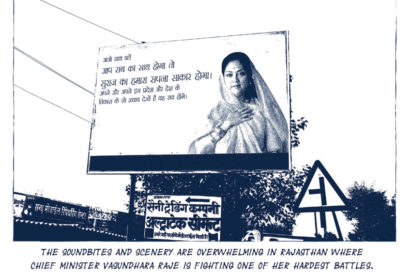 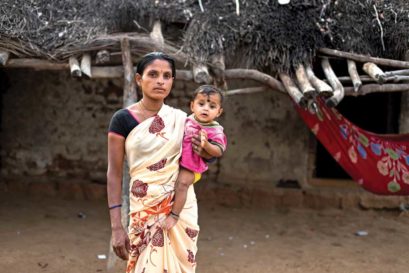 Has the largest tribe in Telangana turned against TRS? 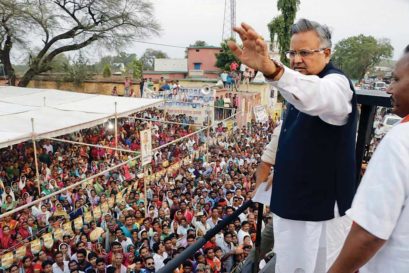 It’s a lone battle for the Chhattisgarh Chief Minister