Amma is Not Well 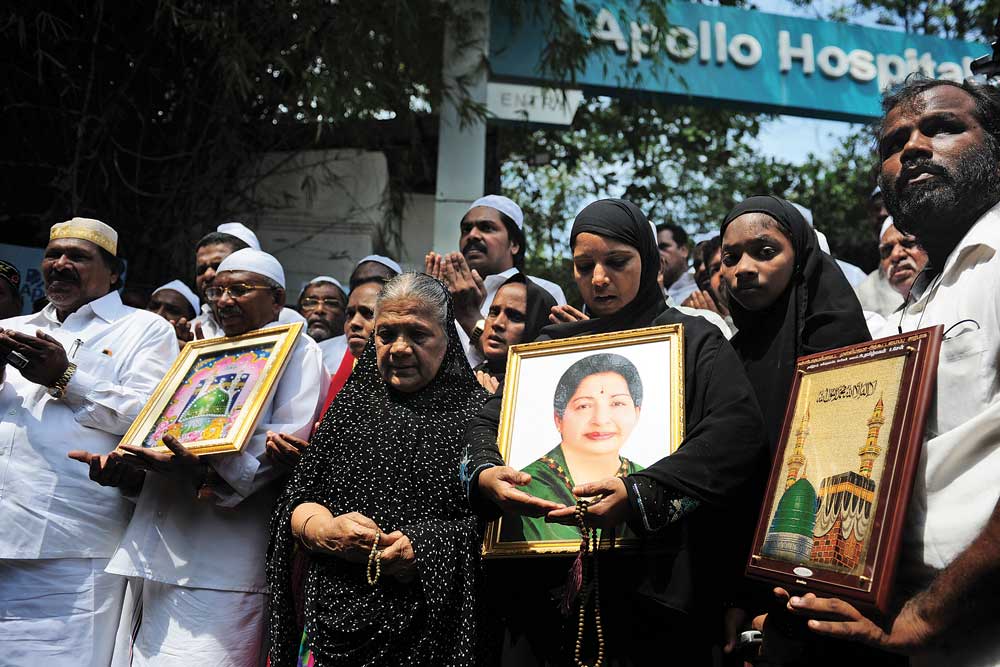 THERE IS AN unshakeable sense of déjà vu about Tamil Nadu Chief Minister J Jayalalithaa’s admission to Apollo Hospital in central Chennai on 22 September. Thirty- two years ago, around this time in 1984, the then Chief Minister and Tamil Nadu’s biggest-ever political heart-throb, MG Ramachandran was rushed to the same hospital in respiratory distress. As he struggled to fight off kidney failure, fluid build-up, cardiac asthma and a cerebral haemorrhage, first at Apollo and then at Brooklyn’s Downstate Medical Center, a miasma of despair and anxiety hung over Tamil Nadu. Andavane un paadhangalil (O God, at your feet), an emotional prayer from the 1968 MGR starrer Oli Vilakku, in which the star battles for his life, was revived decades later and became the most-played song in Tamil Nadu. Partymen looked strained by the thought of a future without MGR, especially with Assembly and General elections round the corner. Finance Minister VR Nedunchezhiyan assumed the Chief Minister’s responsibilities even as some uncharitable members of the opposition alleged MGR was already dead. And then, a master stroke by MGR’s right-hand man RM Veerappan—who arranged to broadcast video footage of the recuperating leader to garner sympathy votes—won them the Assembly election. MGR returned as Chief Minister, having lost some of his speech and none of his charm. In the General Election that followed Indira Gandhi’s assassination in 1984, the AIADMK-Congress combine won 37 of the 39 Lok Sabha seats in Tamil Nadu, setting the stage for a lasting partnership.

If MGR’s convalescence was a period of high drama, 68-year- old Jayalalithaa’s health has become an irresistible subject for speculation on Whatsapp networks. The AIADMK, in keeping with its culture of secrecy, has tried—in vain—to maintain a specious appearance of normalcy. “Amma is nowhere near as serious as MGR was. She has been recovering well and will return home after enough rest. It may take a week or ten days,” says senior AIADMK leader C Ponnaiyan. “In fact, she has been holding meetings, deliberating on the upcoming local body polls and working from the hospital.” The party has released its list of candidates, supposedly vetted by Jayalalithaa, for the elections to be held in two phases on 17 October and 19 October. It has also been making other announcements to suggest that the Chief Minister is conscious and in charge—such as a press release on 27 September about the Supreme Court’s interim directions on the Cauvery issue, and a bonus to PSU employees declared the next day. Apollo Hospital, however, let on in its 3 October bulletin that Jayalalithaa is on respiratory support. An intensive care expert, who had been flown in from London, has returned home.

The perceived acuity of Jayalalithaa’s condition has meanwhile put AIADMK cadres on edge. Some of them, in white veshti and shirt, hang about the tea stalls near the back gate of the hospital, peering across the barricades and trying to confront senior leaders making their way through. For nearly two weeks now, the upscale eat streets of Wallace Garden, adjacent to Greams Road, have been swarming with policemen and Jayalalithaa’s well-wishers. After coming here every day for the past week, Arun Ponnusamy, 36, continues to wait in ignorance. An AIADMK member from north Chennai, he is here with his wife, Thenisai, on a Sunday. “When we ask party leaders, they say, read the press notes. You know there is nothing in them. You tell me, is Amma going to be alright?” she asks me. “If we are to campaign for the party’s candidates in the local body elections, do we not deserve the truth?”

For the opposition, the time for solicitude has passed and DMK supremo M Karunanidhi now demands pictures of a Jayalalithaa on the mend, unmindful of her privacy and integrity. While he has been criticised for his insensitivity, the Madras High Court on 6 October dismissed a petition asking for real facts on the Chief Minister’s health and photographic proof of Jayalalithaa from the hospital, declaring that it had been filed for publicity and for political reasons. Two days earlier, however, the court had opined: ‘AIADMK leader J Jayalalithaa is holding public office, and therefore her state of health must be clarified by government officials before October 6.’

In any case, there are other factors standing in the way of a full disclosure by the AIADMK. One, despite being a public figure, Jayalalithaa is unremittingly withdrawn, shunning the media and only making propaganda statements. Tamil leaders don’t like to admit they are human and fallible, and Jayalalithaa, who enjoys a cult that is next only to MGR, is no different. She would not want to risk exposing the details of her health to the public, nor would she want to precipitate a power struggle within her own party in the event of a serious illness. And so, her government continues to do what it does best, which is to deny information. Second, there is no room for individual freedom of action or expression in Jayalalithaa’s administration. AIADMK leaders are uniformly subservient and accepting of her autocratic style. Even the most senior among them—former Chief Minister O Panneerselvam included—dare not overstep their mandate and say a word about her health. Which brings us to the question: if Jayalalithaa is incapacitated, who is running her government?

Her trusted aide Sasikala and advisor Sheela Balakrishnan, assisted by a small team of secretaries and IAS officers and Chief Secretary P Rama Mohana Rao, are ensuring the government is not seized by palsy. Balakrishnan is said to be clearing files and issuing directives from the second floor of Apollo Hospital, so there is no recognisable distinction between orders emanating from her and those coming from the Chief Minister. She arguably wields the most power over the government, next only to Sasikala, whose looming presence is said to be making many AIADMK leaders fidgety. “She is seen as a chronic troublemaker. She has not just made a lot of money, but also misled Jayalalithaa and involved her in terrible things. Now there is a real fear that she may run the show,” says a former AIADMK leader who switched over to the DMK some years ago. He refers to the almost two-decades-long disproportionate assets case against Jayalalithaa, Sasikala and her relatives VN Sudhakaran and Elavarasi. The Supreme Court has heard the appeals of the Karnataka government and DMK leader K Anbazhagan against the High Court order acquitting them. A decision is expected anytime. Jayalalithaa’s political career once again hangs in the balance, as she could be sent to prison and barred from contesting elections for six years if convicted.

Now that she has her foot firmly wedged in the revolving door of democracy for the second consecutive time, Jayalalithaa’s head must be heavy with worry, this latest bout of ill health adding to her distress. There may not be any second-rung leaders in the party able to stage a coup, but in the event of a protracted illness, there is no denying the possibility that some MLAs could defect to the opposition or even join the BJP. After all, Jayalalithaa herself got the short end of the stick in the fractious weeks following MGR’s illness, when the Veerappan faction conspired to have her removed as deputy leader of the party in an attempt to rein in her ambitions. Not only that, MGR’s wife VN Janaki did not let her visit MGR in hospital. Perhaps it is such betrayals that made Jayalalithaa wary of trusting anyone around her. Consequently, she has no mass leader in her party to fall back on. In the early 1980s, as MGR grew older and weaker, he realised the need for a charismatic crowd-puller who could tour the state and campaign for the party. Jayalalithaa, who had by then given up films, dabbled as a Tamil novelist and fallen into depression following a failed relationship, was brought in as propaganda secretary. In time, this glamorous protégé went on to take the reins of the party and stake claim to MGR’s extraordinary political legacy, a legacy that, ironically, she never found someone worthy of passing on to.

Jayalalithaa has always been a loner, says S Thirunavukkarasu, secretary of the All India Congress Committee, and a former AIADMK man who backed her over the Veerappan-Janaki faction, but was eventually fired from the party for trying to form his own group of supporters. “When MGR was in hospital, his wife Janaki and her relatives (he eventually bequeathed all his wealth to them) were constantly by his side, taking decisions for him. Jayalalithaa does not have anyone but Sasikala. None of her ministers has a personal rapport with her. She stays aloof, maybe because it is difficult for a woman to socialise with partymen. MGR never ate breakfast or lunch alone; there were a dozen partymen with him. He was the power centre of the party, but he gave his ministers freedom to take independent decisions and speak openly,” Thirunavukkarasu says. “Under Jayalalithaa, ministers must seek permission even to go to Delhi and meet their Union counterparts.”

MGR loved meeting people. The Pongal after his return from New York, he travelled to his constituency, Andipatti in Theni district, against doctors’ advice. He was unable to speak fluently and nervously went over his speech in the car, line by line. “When he started to speak, people shouted thalaiva, thalaiva (leader, leader), and silenced him. Words were unnecessary,” reminisces Thirunavukkarasu. The wizardry of a mass leader is such that a glimpse is enough. Amid the wash of rumours, Tamil Nadu is waiting for just that: a glimpse of J Jayalalithaa.