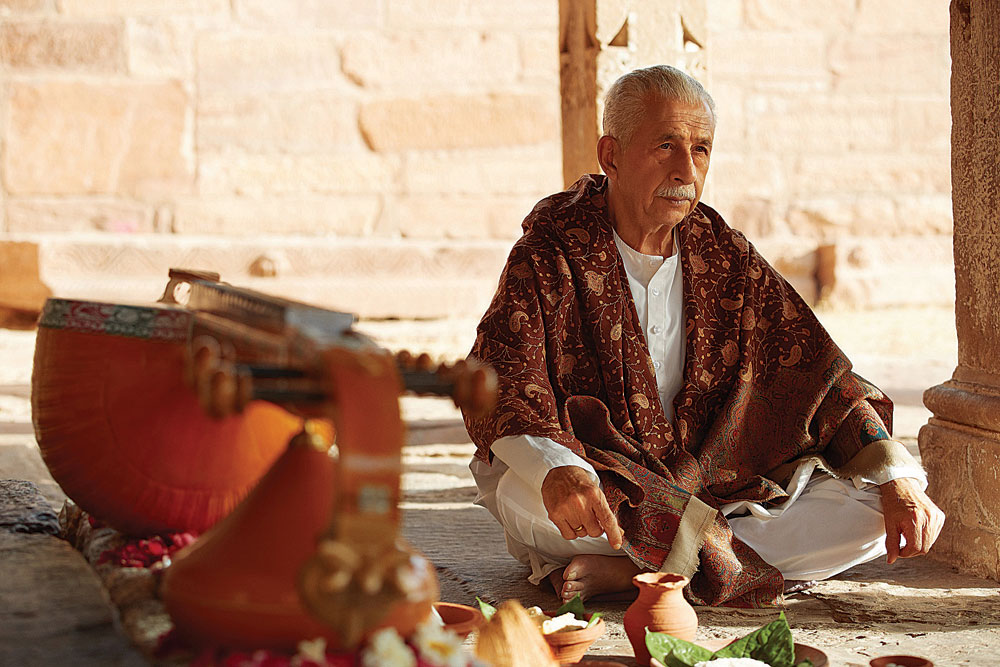 
SANJAY LEELA BHANSALI’S 1999 film Hum Dil De Chuke Sanam (starring Salman Khan, Aishwarya Rai Bachchan and Ajay Devgn) was one of the biggest hits of the year and, two decades later, is still remembered as a high point of Bollywood in the ’90s—incorrigibly melodramatic but elevated by strong performances and music that stayed with you long after exiting the theatre. One of the film’s many brilliant songs was a version of ‘Albela Sajan’, a traditional Hindustani classical song set in Raag Ahir Bhairav, popularised in the ’70s by Ustad Sultan Khan, who’s joined here by Kavita Krishnamurthy and Shankar Mahadevan. Mahadevan sings the Western-style vocalising portions, picturised on Salman, signifying the ‘East meets West’ musical theme of the film (Salman’s character is an Italy-based NRI singer who comes to Rajasthan to study music from a Hindustani master).

Of the many slow-burning storylines Bandish Bandits juggles across 10 episodes, the first is the most traditionally Bollywood: small-town boy Radhe (Ritwik Bhowmik) meets glitzy urban girl Tamanna (Shreya Chaudhry). And because this is a musical, their identities reflect the cultural divide. Radhe is the scion of a famous Hindustani gharana, the grandson of Pandit Radhemohan Rathod (Naseeruddin Shah). She’s an up-and-coming pop/YouTube star. That their romance is a byproduct of creative collaboration is in line with the show’s sensibilities. For Tamanna, Radhe represents a world of new possibilities, musically speaking. For him, however, appearing in her viral videos is taboo (Pandit Rathod doesn’t allow his gharana to be thus commercialised), because of which he wears a mask to do so (thereby inspiring their duo’s name, ‘Bandish Bandits’).

Perhaps the most impressive trick pulled off by Bandish Bandits is the way its third act reveals its true spiritual ancestor—not Hum Dil De Chuke Sanam after all but The Karate Kid (2010). This is accomplished in true Bollywood fashion, with a dramatic entry of Pandit Rathod’s estranged son Digvijay (Atul Kulkarni in strutting form), who challenges Radhe and the Rathods in Jodhpur’s annual music competition, ‘Sangeet Shiromani’. Digvijay claims that Pandit Rathod had ‘stolen’ the Rathod gharana’s music from his nana ji who was once the old man’s music teacher. So the stakes are set—if Digvijay beats Radhe, the Rathod gharana will be dissolved and merged with Digvijay’s proposed ‘Bikaner’ gharana.


If The Karate Kid had rival dojos, Bandish Bandits has competing gharanas. In both cases the ‘claims’ of authenticity are interlinked with paternalistic teacher-disciple equations. In both stories, matters are resolved via a face-off between clan representatives, in front of a packed house—and the young hero fights not just for himself, but for the clan/dojo/gharana.

A show like this was always going to rest heavily on the music itself and, luckily, Bandish Bandits is in very capable hands there. It’s in the Hindustani classical numbers where Bandish Bandits flexes its muscles. ‘Garaj Garaj’ sees the versatile Javed Ali teaming up with Pandit Ajoy Chakrabarty—the classical singer who won a Padma Bhushan earlier this year—and the results are spectacular. Mahadevan outdoes himself on vocals on a version of the traditional Rajasthani song ‘Padharo Mhare Desh’.

In June, the streaming service MX Player released the first few episodes of Times of Music, hosted by Vishal Dadlani. The concept is simple: inviting musicians from different eras to recreate each other’s songs. Across 20 episodes, Times of Music managed to string together some intriguing pairings. Perhaps the most impressive episode was the one featuring Sneha Khanwalkar and the band Indian Ocean.

Khanwalkar’s remix of ‘Bandeh’ (which closed this episode), perhaps Indian Ocean’s most successful song, is breathtaking. She has a vice-like grip on the best of two worlds—the breathless optimism of chartbusting ’80s and ’90s Europop and the more complex emotional palette of contemporary Afro-European acts such as Stromae and Jain. In her breakthrough album, the Gangs of Wasseypur (2012) soundtrack, she had already proven herself to be a master at incorporating specific musical influences. The songs ‘Womaniya’ and ‘I Am a Hunter’ sizzled with the effervescence of Caribbean chutney music (a tradition that fuses Bhojpuri and Caribbean ingredients). In 2012, we saw Khanwalkar in MTV’s Sound Trippin’ (now available on YouTube), a show where she travelled to various parts of the country and created original songs using the sounds native to that region.

Not that Indian Ocean themselves are strangers to the collaborative show format. In 2014, to celebrate their 25th year, the band had created a YouTube series Tandanu, where they invited a new musician/group every week and created original music with them. Shankar Mahadevan himself was one of the most memorable acts —with his Carnatic music background, he was the ideal foil for the titular track ‘Tandanu’, built around a Kannada song taught to Rahul Ram (vocals/bass for Indian Ocean) by his aunt, an All India Radio Bangalore artist in the ’50s.

Both Bandish Bandits and Times of Music trade heavily on ’90s nostalgia—obvious when you look at the episode-by-episode pairings. The groundwork for this genre, however, was done in the first half of the 2010s, when a string of musical collaboration shows appeared on Indian TV screens in quick succession. The most accomplished among these, of course, was Coke Studio—the sheer quality of the collaborating artists featured made it an instant hit in Pakistan, where the show began in 2008. Coke Studio India made its debut on MTV in June 2011 and has been going strong ever since—recent seasons have seen artists such as AR Rahman, Vishal Dadlani, Sona Mohapatra, Papon and Nucleya create and perform original compositions.

John McLaughlin, the English guitarist who blended jazz and blues music with Hindustani classical compositions (with his band The Mahavishnu Orchestra in the ’70s), once described his fusion process: “At the risk of sounding hopelessly romantic, love is the key element. I really love to play with different musicians who come from different cultural backgrounds.” Shows such as Bandish Bandits and Times of Music interpret this message in their own unique ways.