Parul Sharma captures the pauses and patterns of everydayness in black and white (Photos: Rohit Chawla) 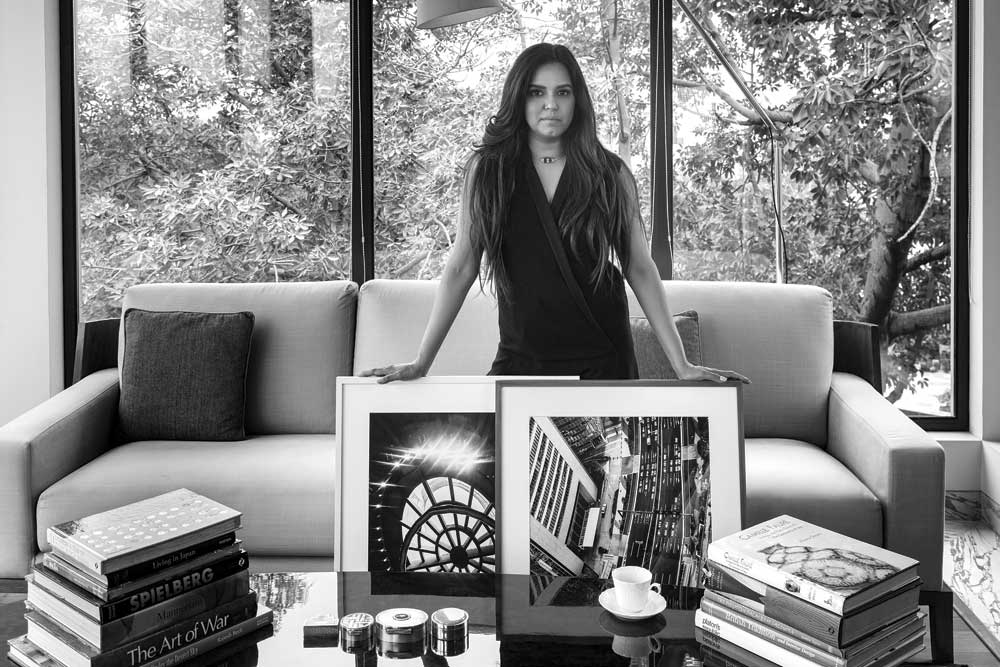 ON THE SECOND floor of a Shanti Niketan home in New Delhi, the dart Art Deco table and Marcel Breuer chairs glistens eerily against the fading afternoon sun in the living room. As the dark clouds loom, we are ushered towards a turquoise velvet sofa set. Two frames rest heavily against the sofas, holding black-and-white images of what at first glance seem like geometric patterns set in piercing contrast. Classical music briefly distracts us from the gloom. As the monsoon darkness sets in, the light casts shadows through the large glass doors. They reflect off mirrors lodged in the ceiling and walls. One can imagine that its occupant must have the luxury to spend many an afternoon such as this in contemplative pleasures. Parul Sharma has had some of those, and then some.

On a Monday afternoon, 44-year-old Sharma walks into her home in a hurry. “I’m sorry to rush like this. I’ve been in and out at the printer’s,” she says. As we move to her dining table, an art deco wooden structure, offset by light chairs in steel and leather (“My furniture is Marcel Breuer, Ludwig Mies Van Der Rohe and Wassily Kandinsky,” she tells us upon enquiry), it’s evident that Sharma has a keen sense of aesthetics. Her house, designed in collaboration with the German designer-friend Niels Schoenfelder—comprising cavernous spaces that marry the love for the outdoors with contemporised indoors—is the first testimony to it. The second is her photography, which she will unveil for the first time at New Delhi’s Bikaner House in an exhibition titled ‘Parulscape’, curated by Swapan Seth.

Even as she prepares for her three-day debut exhibition in the capital, Sharma appears calm and collected, much like the stillness that one observes in her photographs, taken over the last four-five years with her iPhone. “I guess my work does reflect my own personality in several ways. I started taking black-and-white images because there is this rawness in it, this subtlety, which I find beautiful. Personally too, I’m all black and white—I have no greys. At work, I used to be the most undiplomatic person. I’m very straight jacketed,” she says.

In May, she left her job as a media executive to dive headlong into a passion that she pursued without a flicker of doubt in her mind—taking photographs with her phone. As she immersed herself in the everydayness of professional life, her lens found rhyme and reason in familiar corners—be it the lights in Piano Man Jazz Club in Delhi, or the steel wires foregrounded against the sky at the Mumbai Sea Link. Her images crop up in mundane places—hotel rooms, lobbies, staircases, facades of buildings, market complexes, restaurants and airports. In the age of Instagram, a tap of a setting and several accidental frames later, you can customise a whole new life out of an image. In Sharma’s world, however, her photographs are symbolic of the silent pauses between the hurried affairs of daily life, drenched in the quietude of black-and-white.

“We end up going through the same motion over and over, but it is up to us to see the beauty in all of this and make it more interesting, lyrical, even magical” – Parul Sharma, photographer

Architectural structures remain the central focus of Sharma’s work, and they appear almost like living and breathing entities in her scheme of things. They fall in gentle curves and sharp edges, as light and shade brood over lyrical whimsy. “I guess I’ve internalised architecture because I’ve grown up around splendid buildings—I was born in Gole Market [New Delhi] in a colonial bungalow, with St. Columbus school right in front. Our parents would take us to Connaught Place for dinner. My college was in Chanakyapuri [Jesus and Mary College],” she says. Her mother belonged to an old family in Chawri Bazaar where she remembers running to and from the family haveli to fetch rabri and other old Delhi delights. “When people meet me for the first time, they are never able to make this connect with old Delhi. I understand Urdu very well and I follow quite a few Urdu poets, such as Faiz Ahmed Faiz,” says Sharma, who is also fond of works by Russian author Leo Tolstoy and contemporary Australian writer Lang Leav. “I guess you could say that I’m a romantic at heart,” she says with a laugh. In a fitting ode to her love for romance, she captions her Instagram posts, under the handle ‘parulscape’, with quotes and phrases from writers and poets she has read one too many times—from Leav to EB White, and Chuck Palahnuik to Ariel Dorfman.

She later moved to Germany to study and work and lived there for half a decade, frequenting galleries and visiting artists, before she moved to India. “It was in Germany that I learnt about the art movements. I was not an art collector or something. I was a media person, which gave me a lot of exposure. In the process, I learnt a great deal about Bauhaus, which remains my greatest influence, along with Art Deco,” she says, pointing at her Breuer chairs. “You could say that I’m a bit of both cultures. When I’m in Europe, I will relate to their culture. But when I’m here, I’ve retained the tehzeeb that one picks up only when you live in the Walled City,” she says.

Photography, by her own admission, is an entirely new ecosystem for Sharma. Probably that is why the photographer shakes her head when we ask her about influences in the photography world. “There are names I am familiar with, of course, such as Raghu Rai, Prabuddha [Dasgupta] and Pablo [Bartholomew], but this is too new a form for me to be following a particular artist’s work. I think you should go straight and shouldn’t look left or right,” she says, “People like to be confined to a box. As a society, we do not encourage antithesis. I’m grateful that I’m in a position to make that change.” What’s kept her anchored have been her several interactions with literature, poetry, art and design over a period of time.

As the neo-classical gallery of Bikaner House readies for an opening of Sharma’s contemporary creations, we are tempted to ask what, amid the abstractness of her work, does she intend for the viewer to see. “Well, there’s a lot about the mundane, about life, how life is in a box. We end up going through the same motion over and over, but it is up to us to see the beauty in all of this and make it more interesting, lyrical, even magical,” she says.