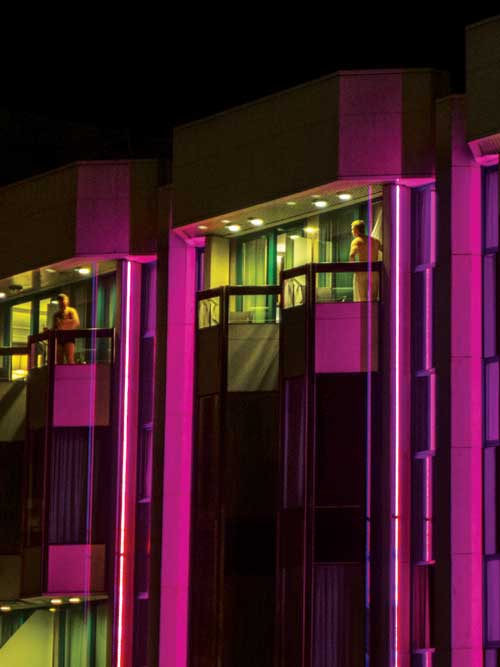 YOU CAN BE lonely anywhere,’ writes Olivia Laing, in her book The Lonely City: Adventures in the Art of Being Alone, ‘but there is a particular flavour to the loneliness that comes from living in a city, surrounded by millions of people.’ In one of Leonardo Pucci’s photographs, a man, enshrouded in the blue light of city dawn, looks out of the window, his back to us. In another image, a man stares at us, a coltish figure framed in a dormer window, as dawn breaks around him in golden spray. It would appear the characters—Pucci’s subjects in these Carveresque visual short stories of urban loneliness—could even have a conversation with each other in spatial time. Their solitudes may intersect in unrecorded time.

‘Photography is always a kind of stealing,’ writes Hanya Yanagihara, author of A Little Life. ‘A theft from the subject. Artists are assaulters in a lot of ways, and the viewer is complicit in that assault.’

But these photographs suggest that being seen is also a different kind of gift: the gift of attention, of the giving gaze. While the photographic form emerged out of an older time, when privacy and private living enjoyed wide-scale currency, the times we inhabit curry invasion: we post photographs of our parties, our weddings, our losses, our peonies, our children, our cats, and the great, sweeping idleness of our hours, nothing is free from invited scrutiny. What distinguishes these pictures is the brush of passing intimacy; one experiences a throb of familiarity, the tremor of possibility—in the way one sometimes does on the escalator, when a passing face on the descending scale catches our eye, and we conjure an encounter, impose motive and opportunity, with a face that we shall probably never see again. Perhaps there is a coda to Hanya Yanagihara’s sharp, striking idea of photographic theft. And this is the relief of being noticed, even briefly, even if it registers as an intrusion. Perhaps some photography is not a form of stealing, but a contribution, if not of momentary interest or concern, then of pause. Someone saw. We are not alone.

While the images do not have the ‘grainy quality reminiscent of low-grade peepshow reels’ (Merry Alpern described thus her own provocative photographs recording intimate sexual acts in New York), Pucci’s shots pay homage, for their composition and in their mood, to the rigour, and brooding alone, of Edward Hopper, and to his use of light to establish an atmosphere of unassailable loneliness. Like in a Hopper painting, the subjects in this suite of photographs appear solitary in the weight of light they are drawn out of, light with an underwater quality, the wavering light of an aquarium. In Ann Packer’s chromatic novel, The Dive from Clausen’s Pier, a mother observes to her daughter that lonely is a funny thing. ‘It’s almost like another person. After a while, it’ll keep you company if you let it.’ In Pucci’s photographs, the loneliness of his subjects begins to keep us company, if we might let them.

(Episodes (Without A Real Order) is on display at the Sunaparanta Foundation, Goa Centre for the Arts, till May 24th, and will show at the Project 88 gallery, Mumbai (June 21st-July 6th), before travelling to Nature Morte, Delhi) 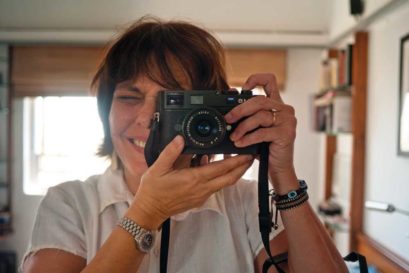