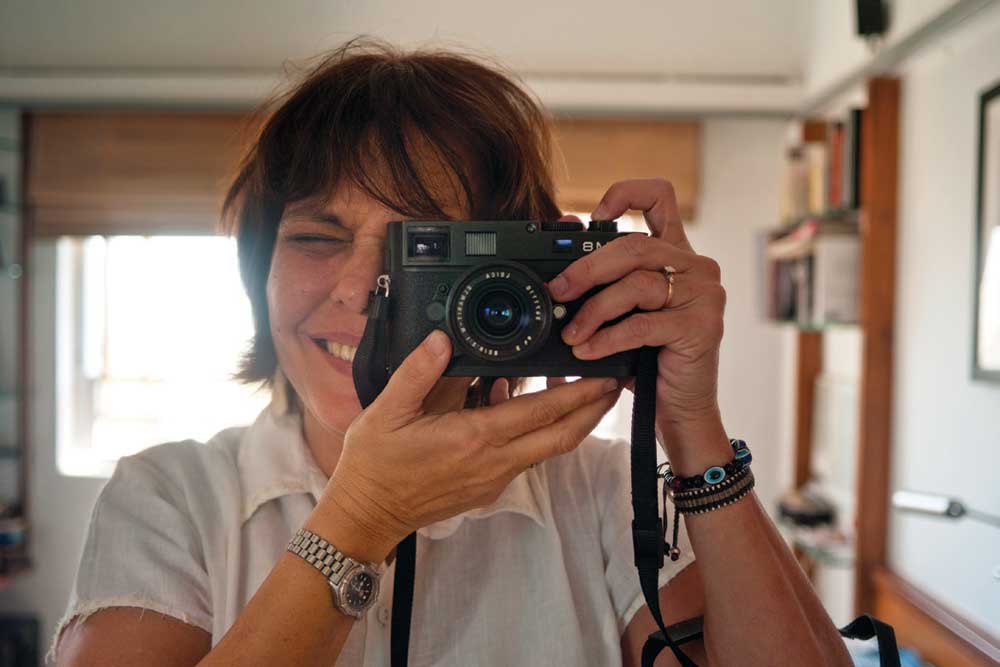 AN AGEING, PENSIVE Raj Kapoor stares at the photographer at the Jaanbaaz movie premiere in Bombay, 1986, while an elderly Parsi female fan ogles him lustfully. This photograph is flanked by Indira Gandhi, as she looms out of a poster for the Congress Centenary celebrations in 1985. Below the photograph, a nurse can be seen through a parked ambulance window. On the other side, the Navy Band plays at the Jaanbaaz premiere. Next to it is a photograph from the sets of Salaam Bombay in 1987. Then MF Husain reads a book in his messy bedroom in Mumbai in 2005. Next to him is an image from 1977 of the Gateway of India. It’s been taken through an open window from Sea Lounge at the Taj Mahal Hotel. Sooni Taraporevala took this last photograph at the end of a blissful semester off from Harvard University. When she returned to her darkroom in college and developed the photos, there were more hits than misses, but there was this one bull’s eye—the first photo she was ever satisfied with. It stayed on the top of her list of favourite photos for over 10 years. But now, after the 2008 attacks, those windows are no longer opened.

Photographer, screenwriter and filmmaker, Taraporevala has written screenplays for films like Salaam Bombay, Mississippi Masala, Such a Long Journey and The Namesake. She has also directed the National Award-winning Little Zizou and was awarded a Padma Shri in 2014. But before she became the woman who is everywhere and has done everything, she was a freelance photographer. Her photographs are in the permanent collections of the National Gallery of Modern Art, Delhi, and the Metropolitan Museum of Art, New York, and were included in exhibitions in Tate Modern, London; Institut Valencia d’Art Modern, Spain; Musee de Quai Branly, Paris. Her book, Parsis: A Photographic Journey, which was published in 2000, is a 20-year-long labour of love that offers a rare insider’s view of life within the Parsi community.

In June 2016, Taraporevala and curator Siddharth Dhanvant Shanghvi started culling photographs from her archives (an old filing cabinet in her apartment where the photographs had been languishing for years). It was originally meant to be a collection of her Instagram photos in colour. But when Shanghvi showed the pictures to Photoink’s founder-director Devika- Daulet Singh, she suggested that they hold an exhibition specifically on Mumbai. “And that’s how it all happened,” she says. Home in the City, Bombay 1977-Mumbai 2017 previewed at The Whitworth Gallery, University of Manchester, UK, on March 4th, 2017. It has also been exhibited at the Chemould Gallery in Mumbai and Sunaparanta, Goa, and is presently on display at the Vadehra Art Gallery in Delhi where it features 75 photographs. As writer, Pico Iyer says in an essay in the book that accompanies the exhibition, ‘You soon see, when you meet the photos here, that Taraporevala is a connoisseur of intimacy.’

THE EXHIBITION PRESENTS 40 years of the rich and famous with the ordinary and mundane sights of Bombay/Mumbai to create a collage that tells as many stories as her many screenplays based on the city. Not all of the earlier images that were shot on film were salvable. Taraporevala had a leak in her roof once, and some negatives were ruined then because of water damage. But digital scanning helped her preserve the rest. It could practically be a metaphor for Mumbai itself. Taraporevala divides the show into ‘Bombay’ and ‘Mumbai’. “It’s not a metaphor, it’s a fact,” she replies when asked about this divide, this shift being reflected in the exhibition. “[It] spans so many years. When I began, the city was called Bombay. Post 1995, it became Mumbai. The city has changed not just in name, but also in its character.”

The intimacy that Pico Iyer mentions is visible throughout the photographs in the exhibition. Taraporevala has a talent, across words and images, to separate the individual from the crowd and use the image to tell intimate but multifaceted stories. As Shanghvi says, “Her images cut across class and community lines and give an insider’s affectionate view. They celebrate the odd and the everyday and explore a metropolis that has shifted over four decades to become one of the most populous cities in the world. The works on display are personal documents of the city’s eccentrics, its children, its elderly and the landscape; a gentle mirror to culture and politics, with the secret sideways glance of a casual observer.” For example, the pictures from 1985 include one of an elderly Sikh dancing at a New Year celebration with complete abandon despite it being tense times for Sikhs. “This would have been impossible in any other Indian city in this period,” says Taraporevala. “Like New York City, Bombay has always been this melting pot. Yeh hai Bambai meri jaan.” This is even more evident in the book that accompanies the exhibition, which rather than being an extension of the show, tells entirely different stories. For example, the picture of Raj Kapoor is flanked in the book by a picture of his sons focused on eating and drinking at a Bombay Times party in 2002. The next few pages are dedicated to pictures of waiters at the same party, entitled Happy Waiter and Sad Waiter. Another page is dedicated to a 2017 image of a headless Lord Cornwallis from the backplot of the Bhauji Lad Museum in Mumbai. Next to it is a statue of Queen Victoria with its head chopped off and crudely re-attached, but now missing a nose.

“Photography informs my screenwriting,” she says. “The kind of screenplay I like is visual rather than dialogue heavy. I think visually.” Perhaps that’s why there are so many images from the sets of her iconic films, Such a Long Journey and Salaam Bombay. These include striking images of a young Irrfan Khan and Sarfu from a Salaam Bombay workshop in 1987; a young street boy carrying a movie camera while a little girl peers intently at the lens. One called Timepass: Spectators looking up to see the shoot but there’s nothing to see as the set is boarded up to keep out the sound captures a crowd any rally would be proud of. Another called Gun Battle at Cusrow Baug shows a young boy threatening another with a gun in front of an old Ambassador car. The boy being threatened is laughing a little too loudly and hysterically, while the one with the gun isn’t amused at all.

Taraporevala grew up in Mumbai as a single child surrounded by a large family of uncles, aunts and cousins and this frames her lovely intimate pictures of Parsis that pepper the show. Unlike the rest that focus on an individual in a crowd, these are close-up, personal portraits of individuals content in their own eccentricities—whether it’s a beautifully dressed Jahangir Sabavala seated alone at the funeral prayers for JRD Tata or a girl dancing with a dupatta at a Navjote or a nappy-clad baby visiting Taraporevala’s grandmother. There aren’t enough. “I didn’t want to overload the show with photos of Parsis since I’d already done a show [on them],” she says. Although the earlier show on Parsis was in colour as well as black-and-white, Taraporevala wanted this one to be exclusively black-and- white because that is “how I started with photography—I only did black-and-white for many years”.

What are her favourites in the show, I ask. “I have no favourites. At different times at my life, different images have become iconic. Currently, the pictures that have received the most appreciation are Mumbai by Night, the image of a woman reading at night seen through a lit window; and Synagogue, a 2012 image of five figures including a Rabbi framed in the open windows of a once grand building as they say their prayers.”

Being who she is, how is she able to pull out her camera and take intimate shots at public events? She laughs. “It’s not such a big deal. I’m not Deepika Padukone. I don’t call attention to myself. I don’t have a big SLR with a huge zoom lens and I don’t dress like a photographer. For instance, at the recent Royal Opera House opening, I was in a sari and taking photos with a small and discreet Leica.”