Where are the Birds Going?

One Northern Shovelor went to Bihar instead of the Arctic. The patterns of bird migration in India are going awry 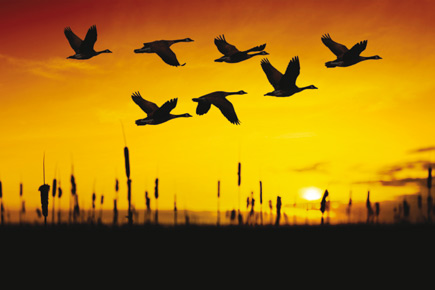 One Northern Shovelor went to Bihar instead of the Arctic. The patterns of bird migration in India are going awry


Point Calimere is a wildlife sanctuary on the Coromandel Coast in Tamil Nadu. It is where the Bay of Bengal meets the Palk Strait. In the varying landscape of the place (which includes the supposed footprints of Rama while he surveyed Lanka, a dargah, and abandoned lighthouses) exist vast expanses of mud­flats and salt pans that work as winter breeding grounds for various migratory birds.

In just three years, the wetlands are no longer well flushed by the tide, as in the past, reducing the availabil­ity of food for the birds.

Dr S Balachandran, assistant director of the Bombay Natural History Society (BNHS), has worked as an orni­thologist for almost 30 years, researching birds at impor­tant migratory sites like lake Chilka in Orissa, Pong dam in Himachal Pradesh, and Point Calimere. In his estima­tion, the number of migratory birds visiting Point Calimere at the tip of Tamil Nadu during winter has sharply reduced in the past few years. Two decades ago, more than a million birds congregated here. Now the population is down to around 150,000.

The ornithologist has also observed some unlikely visitors and odd behaviour in the depleting population. Earlier, one wouldn’t see more than one or two Slender-billed Gulls here, as they traditionally migrated to Gujarat and Pakistan. Now, they are seen further south­east at Point Calimere in several thousands.

There is also the phenomenon that scientists call ‘oversummering’—that is, migratory birds overstaying their visit and spending their summer here instead of northern climes. Instances of oversummering have been observed in birds like the Garganay, Northern Pintail and Northern Shovelor at Point Calimere.

Then there are the lost birds, which instead of making their marathon journey back to the Arctic, spend the winter in unlikely places. Through satellite tagging, Dr Balachandran’s team documented a Northern Shoveler spending its summer in Bihar instead of the Arctic in 2010. In 2009 too, the team had recorded a Garaganay migrate from Tamil Nadu to Gujarat, instead of the Arctic. Without further research, one can only specu­late about why bird behaviour is undergoing such changes. “One needs to study both, Climate Change and the change in habitat,” says Dr Balachandran, “to under­stand what is happening.”

While similar studies have been conducted in Europe and North America, in India, we are still working on lay­ing the foundation for it; something called ‘baseline data’. At Point Calimere, Dr Balachandran and his team are in the process of collecting such data. Due to the high costs involved in the satellite tagging of a bird (Rs 2.5 lakh each), Dr Balachandran’s team has successfully tagged only 30 birds so far since 2008.

Each season, tribals are employed to work as bird­catchers. People are brought in from Bihar to catch big­ger birds like ducks, while tribes in Tamil Nadu are skilled in catching smaller birds, like the ones found in mudflats.

Once caught, the team has the unappealing task of attaching a ring to its leg. “We get many scratches and injuries while putting the rings on, especially on carnivorous birds, and birds with big claws, talons and mandibles. When the birds see humans, they struggle a lot,” says Dr P Sathiyaselvam, part of the BNHS team. Compare this to the smoother process of attaching a Platform Terminal Transmitter (PTT). A small mask is placed over the bird’s head, its legs are tied, and the PTT is tied onto it like a backpack. Each instrument costs about Rs 2 lakh, and following a bird via satellite costs another Rs 50,000 odd. The bird’s position is refreshed every two hours, on average. Just as other people obsessively check their email, Dr Balachandran and Dr Sathiyaselvam go online to track their birds.

The ‘epic willfulness’ baffles scientists and amateur birdwatchers alike. It is what makes palm-sized Kunta a nationwide celebrity. Kunta, a Grey Wagtail, weighs just above 15 gm, and despite being handicapped has made a migratory journey of 1,500–2,000 km from the highlands of Central Asia to Billigirirangan Hills in Karnataka for three years consecutively. It arrived at TS Ganesh’s coffee estate, south of Bangalore, with one leg missing. Ganesh had noticed it for the first time in 2007, when it spent the winter in his garden with another Grey Wagtail. Its missing leg made each of Kunta’s visits an epic one, and brought it fame by being featured in national newspapers and magazines, including Open.

“Migratory birds have to solve a number of problems,” says Dr Suhel Quader, a scientist at the National Centre for Biological Sciences, Bangalore, and founder of Migration Watch, a national citizens’ project to document bird migration. “They have to ‘know’ where to go; they have to fuel up by building fat reserves before migration; and then they have to travel thousands of kilometres without starving, freezing, collapsing from exhaustion, or being caught by predators. Not all individual birds manage this, of course, but the fact that so many do is astounding.”

‘Migration itself is a response to ecological conditions, and in many species is a flexible and adaptable trait,’ explains a report titled ‘Migratory Species and Climate Change’, published by the United Nations Environment Programme (UNEP) and its global partners.

Changes in climatic conditions lead to changes in the occurrence patterns of life forms like birds, turtles, cetaceans and insects. But although the scenarios of Climate Change are generally within the known range of historical conditions, the rate at which they are changing [at present] is unprecedented, so organisms may be unable to adapt sufficiently rapidly, the report warns. A study published in 2009 in the Royal Society’s flagship biological research journal Proceedings B corroborated the concern, by showing how long-distance migrants are more vulnerable to Climate Change than residents and short-distance migrants in Europe. The long-distance migrants, while away on their distant wintering grounds, cannot predict when spring starts on their breeding ground. Climate Change is leading to a mismatch between peak food availability in seasonal habitats and the arrival of long-distance migratory birds, with severe consequences. The study pinpointed Climate Change as the culprit by comparing regions within Europe with stronger and weaker degrees of spring warming.

“Such changes are well-documented from Europe and North America, but very little systematic information exists from India. The natural world is changing rapidly, in many cases too rapidly for us to adequately monitor what is happening,” says Dr Suhel Quader. Which is why he started Migrant Watch. “It was set up to track changes in the timing of bird migration to and from India. Since there is a large community of passionate and dedicated bird-watchers and nature lovers in India, it made sense for us to work with them to track bird migration in our region.”

In February 2011, the website published a post aptly titled ‘Where have the migrants called?’ The webpost called the year gone by a ‘disquieting year for birders monitoring our wetlands’ due to the lower number of birds and fewer species. While the reasons behind it—like habitat loss and unseasonal rains preceding the winter— come as no surprise, bigger questions remain unanswered. ‘Where do the displaced migrants go? Do they merely redistribute themselves locally, moving to other wetlands created by the rains? Or, do the changes in rainfall patterns bring about much larger-scale changes in bird migrations?’ asked the post.

No one knows yet. Until we do, we run a high risk of losing the fragile links that connect the skies over our homes, neighbourhood mangroves and ponds, to lakes far away in Mongolia and China, even springs in Siberia. The Bar-headed geese that were spotted at Bakreswar dam in West Bengal flew over some of the world’s highest peaks in the Himalayas to reach there. An individual can take off from a wetland in north India, reach altitudes of over 7,000 metres above sea level, overfly the Himalayas, and land in Tibet, all in the same day.

Meanwhile, Kunta was last seen in the winter of 2009-10; perhaps the perils of migration finally caught up with our courageous Wagtail.