What’s in a profile picture? 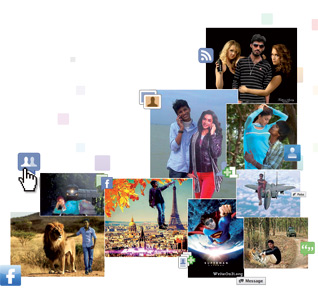 ‘If [yo]u liked my profile picture raise your hand, if not raise your standard….!!!’ –Kunal

Abilash Sashi, 32, had a normal life—a paying job in a private firm, living in the coastal town of Alappuzha in Kerala—until he attempted something dreadful: a selfie with his phone-camera while staging a suicide. He was trying to capture a unique Facebook profile picture of his own suicide attempt. The prank went horribly wrong. The knot around his neck was tighter than he thought, and by the time he realised his mistake, it was too late.

He was found a few hours later hanging by the neck, his phone-camera stationed on the table to capture the stunt. Apparently, this was not the first time he had tried something like this; earlier, he had posted a picture of his bloodied hands after slashing his wrist.

What explains this death by social media? Sociologist Shiv Visvanathan says, “The fantasy world and the real world merge in an instant, [changing] the nature of reality on social networking sites. You insert your new self, which is mysterious. Pictures are a way to document it, make those moments historical.” He calls it a form of neo-narcissism—the context of existence and life change in a flash and often contribute to the creation of a newly enlarged notion of selfhood.

A teenager, a boy named Edwin from Thrissur, another town in Kerala, was perhaps catering to the demands of his newly enlarged self when he attempted a picture of himself against the backdrop of a train whizzing past his back barely inches away. He was to stand firm as the train hurtled past, shaking everything in sight. He sat posing on the railway track while his younger brother took pictures in the presence of a friend. As the train approached, Edwin made a miscalculation. Unable to move quickly enough, he was crushed by it.

Pin the blame, if you will, on the profile picture—on the need that some youngsters have of using it as a device, as a way to announce their presence on social media as something extraordinary. In many cases, it comes from a need to project a certain image to the rest of the world: a picture of heroism and adventure.

Kunal, a 20-year-old law student, has a different perspective on the matter. He specialises in creating profile pictures for people, charging Rs 500 for a photo, typically manipulating the images to make his subjects look taller, slimmer and fairer. Sometimes, he edits the pictures to include sought-after scenery as well. Foreign locations are popular as backdrops. Sometimes people want to appear with film celebrities spliced into the frame. “There is nothing wrong in doing things to feel good about oneself,” says Kunal, empathising with Edwin and Abilash. He is an avid self-profile creator himself. “A profile picture defines me,” he says, “I like to exhibit a facet of myself that I am proud of.”

While he admits that his choice of profession— law—demands a certain gravitas and bearing that resists frivolity, he is also sure he is not a “serious type of guy” at heart, and wants his social media acquaintances to know that. He also wants them to see his new second-hand superbike as an affirmation that he loves to live life “king size”, and that he is blessed with what he calls a “huge reservoir of raging hormones”. The social media persona, says Kunal, is “about me and me and me”. And if Abilash and Edwin wanted the world to know their real selves, he believes, they would’ve been all the better for it had misfortune not struck.

The need to control people’s perceptions of oneself can become an obsession. Noted sociologist Sanjay Srivastava, professor at Delhi University’s Institute of Economic Growth, calls it the rise of an ‘entrepreneurial culture’. This contradicts modernism, he says; while individual identities have become predominant, they coexist with those of caste, creed and religion. These identities tend to reinforce each other. “[People] haven’t gotten away from older loyalties due to this growing devotion to their selves,” he says, “Social media is actually individual media.” The sociologist calls Facebook and Twitter “platforms of collective individualism”.

Self projection can have varied motivations. A month ago, Vikas, a middle-aged trader from Agra on holiday in Goa, paid a Dutch bikini-clad blonde on Calangute beach $20 to be photographed with him. With the sun low on the horizon, they stood in an embrace while his friend took a series of snaps. Vikas had another set of pictures taken with a brunette—this time with his shirt off. The same evening, he uploaded one of these on Facebook with the caption: ‘There is only one happiness in this life, to love and be loved’.

Shamikh, a 24-year-old medical student, has as his profile a nude photograph of himself when he was three years old. “I miss my lost innocence,” he simply says, “I prefer my past to my present.”

There are many others who prefer a single shot of themselves that they don’t want changed: like a stable passport identity. Ashutosh Varma, a senior executive at a multinational financial institution, has not changed his profile picture in years—a mug shot against brick-red background. Some people change their profile pictures on a daily basis. Occasionally, people have two Facebook accounts; one for family and friends, and another for colleagues and acquaintances. A PR executive operates his wife’s Facebook account. There are even a few who don’t care if someone else pretends to be them, online.

At the other end, among those who are careful about their social media presence is a professor at an open university who would rather not be named. She hates anyone putting her pictures online and being tagged without her permission. At social gatherings, she has a standard finger to wag if she happens to get photographed: “Don’t put it on Facebook!” She is known to jump out of her chair, gesticulating wildly, to make that point. If she’s in the company of “intellectuals and suave socialists”, she admits, she doesn’t mind being tagged online for others to recognise her.

Then there are people who have not uploaded any pictures of themselves at all; some use their real names, while many prefer to use pseudonyms. “Anonymity gives me the freedom to lead a life that is free of the demands of my current life situation,” says Ritesh Kumar, an environmentalist who hasn’t ever uploaded a picture of himself.

Omar, a 27-year-old software executive based in Bangalore, has chosen a blank profile picture for himself on Facebook. “My life is not for public consumption,” he explains, “[though] I don’t mind peeping into the lives of others if they don’t have a problem.” He concedes, however, that striking friendships on Facebook—despite his 300 ‘friends’—is that much harder without a face for people to put his words to. “Hardly anyone wants to be friends with ambiguity,” he observes, “People interact with people, not a phenomenon.”

Once put up, online photographs are almost impossible to expunge. Awadesh Kumar Srivastava was on election duty as a sector magistrate in Narendra Modi’s constituency of Varanasi during the recently held General Election. An audit officer with the Rural Engineering Department, Srivastava was the custodian of two standby electronic voting machines (EVMs). He took them home, opened the seal and examined them with his son Gaurav, a curious engineering student. The father-son duo then uploaded pictures of themselves with the EVMs on Facebook with the caption, ‘Ab ki baar, Modi Sarkar’. Within a day, those pictures went viral. Alarmed by this, the Aam Aadmi Party alerted the Election Commission and media. A criminal case was registered against both father and son; the former might end up in jail and lose his job.