Fancy living on a diet of raw food? Many are doing it 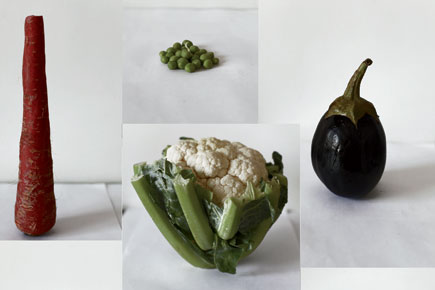 Fancy living on a diet of raw food? Many are doing it


On a warm Sunday afternoon, in a neighbourhood filled with pubs and cafes, a group of people are gathered on the top floor of a quaint two-storied bungalow in Mumbai’s posh Pali Hill area. The venue, with its sloping roof, opaque windows and a balcony overlooking a few trees, looks like one of those Catholic-housing goathons (villages) of Bandra. It is not. It is actually an art space called False Ceiling. Inside, spread out on a large table is an assortment of carrots, cucumbers, dates and several other vegetables and fruits. The group stands around this table, a motley bunch of writers, photographers, an architect and a few White expatriates, people who look like they have never been anywhere near a kitchen. They are busy slicing, chopping, dicing and grating the food items.

Leading them is Mona Gandhi. She is orchestrating a raw meal. ‘Uncooked,’ as she calls it.

Gandhi is a raw foodist—a term for an individual who eats only uncooked and unprocessed food. The human body, as her belief goes, stays healthiest this way. Such a diet results in a high intake of all the proteins and vitamins of fresh food that she believes are lost in the process of cooking. She slips in an occasional steamed potato or yam in her salad, but otherwise lets no cooked food get pass her lips. She has been on a raw diet since April last year, and is hosting today’s lunch at False Ceiling as part of a year-long art project (along with curator Gitanjali Dang) to popularise the idea. In another two weeks, she plans a similar lunch in another part of Mumbai.

As appetisers, there are carrot sticks and a dip of mint-and-basil pesto, served along with fresh fruit juice. The main course has three different salads with mint and tamarind dressings, all of it fresh and uncooked, and with no trace of oil, not even in the dressings.

As lunch is being had, whiffs of food being cooked in nearby houses waft in, and jokes are cracked about sudden pangs of hunger for a wholesome meal. But otherwise, the lunch goes down well.

The West has had a raw-foodist subculture for quite some time now, and while others mostly see it as a fad, it has that inarguable stamp of popular legitimacy: the existence of fine dining restaurants and chefs as well as celebrity adherents. Demi Moore and Madonna are just two of America’s best known raw foodists. There are thousands of others. Most of them are either vegans or vegetarians, of course, although there are also several who eat raw meat.

In India, the trend seems to have picked up only recently. Last year, Auroville in Puducherry saw the opening of India’s first raw food centre. Started by a raw foodist called Anandi Vaithialingam, it has a restaurant and a take home service, and the items on offer include raw bread (made of seeds and nuts), finely cut cauliflower and lime as a substitute for lemon rice, and pizzas with a base made of dehydrated nuts and seeds. In Goa, vegan and vegetarian gourmet restaurants like Beam Me Up and Magic Bus have a wide selection of raw food dishes on their menu.

Shammi Nanda, a documentary filmmaker and an advocate of Nonviolent Communication (NVC), a process developed in the US in the 1960s as a means to resolve conflicts between people, is a partial raw foodist. At least 60 per cent of the food he consumes is raw, with this proportion rising whenever he has access to more of it. Currently living in a friend’s house in Goa, Nanda travels from place to place, often staying with friends, to hold workshops on NVC.

“When I worked in Bombay, I fell ill because of the food I consumed,” he says, “My asthma worsened and I became dependent on an inhaler. That’s when I switched to a raw and steamed food diet. I realised that all we need can be found in a plant-based diet. And now I am doing remarkably well. I don’t even use an inhaler.”

Nanda eats only fruits till noon, after which he lives on raw salads, steamed vegetables and a little grain. If he is on a long journey, he often survives on an exclusive diet of sprouts. And if he finds his stomach uneasy, he gives himself unadulterated lime shots, sometimes using up as many as 20 in a day.

Then there are the likes of Bhavna Kapoor, another documentary filmmaker. Although she has not turned into a complete vegan raw foodist, she finds the idea appealing enough to keep coming up with raw dish innovations. She makes what she calls ‘raw brownies’ by blending together dates, cocoa powder and walnuts. Since dairy products are a no-no, being a vegan, she has found substitutes. Her curd is made of ‘peanut milk’ (peanuts that are soaked, blended and later strained) and her cheese is made of cashew nuts.

Gandhi is a breast cancer survivor who switched to raw food while undergoing chemotherapy last year. “Back in 1997, my sister and I had switched to a raw food diet for over a year,” she says, sitting in the balcony of her Altamount Road residence that faces Mukesh Ambani’s skyscraper home Antilla. “Our yoga teacher back then was a raw foodist and we were following him. But we reverted to regular meals when we found people around us getting perturbed by our choice. Last year, when I was diagnosed with cancer, and because the effects of chemotherapy made it hard for me to consume even a few spoons of khichdi, I switched over to raw food once again.” While on chemotherapy, Gandhi would throw up almost everything she ate, and her mouth would develop blisters if she forced herself to eat anything. A raw food diet—of only juices at first—was a relief, but her doctor asked her to get back to regular meals. “He was worried that my body would grow weaker and that my immune system would not hold up.” But she persisted with her raw food diet without letting her doctor know. Gandhi underwent six chemotherapy sessions and believes it was her raw food diet that helped her regain strength. While she weighed 54 kg at the time of her diagnosis, her weight was down to 43 kg during her recovery period. Now 44 kg, she says she is slowly regaining weight.

Among her raw-food preparations, Gandhi is fond of cold soups like gazpacho (a tomato-based vegetable soup) and soaked and blended peas and cashews as a substitute for milk. All her vegetables, ordered online, come from an organic farm in Maharashtra’s Ganeshpuri.

To convince others of the diet’s merits, she holds not just lunches but larger workshops and camps as well. Earlier this year, she held an eight-day residency in Goa where participants only ate raw food. After a few months, she plans a trip to Kerala to hold a workshop on raw food for a Tibetan welfare camp. “All animals eat living food,” she says, “It is only humans who cook their food. It is also only humans who suffer such a wide array of ailments. What cooking or heat does to food is deplete its protein and vitamin content. It also destroys its natural enzymes that facilitate digestion. When our bodies consume cooked food, to digest it, the body has to use up its own limited supply of enzymes.”

Scientists and dieticians, however, debunk such claims. They say that cooking does not harm food, it sterilises it. Some argue that in several cases cooking can enhance the intrinsic value of food as well. According to Rui Hai Liu, an associate professor of food science at Cornell University in the US, tomatoes and other rosy fruits like watermelon and papaya release a red pigment called lycopene, which is known to lower the risk of cancer and heart attacks. In a 2009 Scientific American article, he is quoted as saying that the level of one type of lycopene, cis-lycopene, in tomatoes was found to rise 35 per cent after being cooked for 30 minutes at 190.4º Fahrenheit (88º Celsius). “Cooked carrots, spinach, mushrooms, asparagus, cabbage, peppers and many other vegetables also supply more antioxidants, such as carotenoids and ferulic acid, to the body than they do when raw,” he told the magazine.

It is easy to think of raw foodism as an elitist fad. However, BV Chauhan, a former electrical engineer from Gujarat, has been turning Indians of modest means into raw foodists. Using the tagline ‘Kachu Te Sachu’ (power of raw) and citing Tulsidas’ Ramcharitmanas as a source in support of eating raw food, he holds workshops across the country propounding its benefits.

Chauhan’s followers fast for over six hours until noon, after which they eat only raw food. They also have to go through a routine of two daily enemas. “Many of them have given up cooked food,” he says, “But those who have not quite been able to are permitted cooked dinners.”

Girish Doshi and his wife Alka, of a middle-class Gujarati family that runs an optician shop in Ghatkopar, are two of Chauhan’s most avid followers. They have been following his recommended diet for over three years and also help him organise workshops in Mumbai. “After our morning fast, we consume bhel made of raw vegetables and fruits and juices the entire day. At night, we eat a bit of chappati and steamed vegetables. Even this we are trying to give up,” Girish says. What the couple have not been able to do is give up all sweets; pedas remain a dinner staple. “How can you ask a Gujarati to give up sweets?” quips Girish.

Strict adherence to a raw diet is difficult, even Gandhi admits. She recounts a joke that her friends have come up with. “They say, ‘Don’t ever take Mona for paani puri. She will tell the paanipuriwala, ‘Get rid of the paani and the puri, just give me the sprouts.’”