The Pleasures of Being at Sea

The hidden enchantment of Bekal Fort 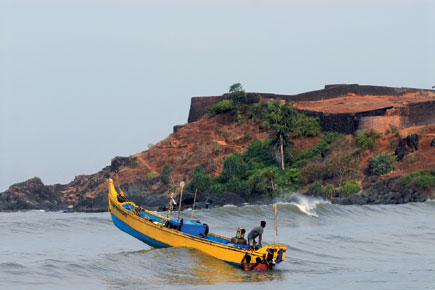 There is an insect that people avoid
(Whence is derived the verb ‘to flee’).
Where have you been by it most annoyed?
In lodgings by the Sea
—Lewis Carroll, A Sea Dirge

The delightful Mr Carroll, who loved to talk of ‘shoes—and ships—and sealing wax’, was clearly referring to the bee as the ‘insect’ we all want to avoid in the poem above. And when a shiny, black carpenter bee droned and whirred on the outer deck of my tree house in an island resort of northern Kerala, my fearful self was visited by the memory of these very sagacious lines I once read in school. In my excitement of getting to stay in a tree house directly facing the luminous backwaters in God’s Own Country, I had failed to account for the other not-so-gentlemanly callers from the surrounding trees. I instantly regretted choosing the tree house over the boat house I was graciously offered to switch to by GS Gul, the owner of Oyster Opera—a charming backwater retreat in Thekkekad island in the Kasaragod district of Kerala. I missed my previous cottage—perched at the edge of the resort, kissed by the gently lapping waves of the Kavvai backwaters—and that windswept hammock on which I had spent two listless evenings snoozing with a book I did not open even once. But then I straightened my back and told my chicken-hearted self to stop acting lousy on this trip to the seas. If on the previous night I could gingerly manage to hold and pose with a live crab—hunted out by Dinesh, the glorious man Friday of the resort—I can certainly learn to let the bee be. This is what it is like to be on an island of evergreen coconut lagoons.

I ain’t a creature of the sea. In spite of the fact that most of my family vacations have featured the rolling deep. In spite of having lived in the coastal city of Chennai for three years, with the paradisal Pondicherry just hours away. In spite of shying away from the December chill of the misty mountains. But then having lived the last three years in landlocked Delhi, with no sand or salt water in sight on all those weekend getaways, my heart was suddenly full of longing for the wrinkled blue. The last few months I knew I simply had to go to a beach. And luckily for me, a trip to Kerala, sponsored by the state’s Department of Tourism, came my way. Who was I then to resist the forces of the fates conspiring to fulfil my craving for the sea?

The highlight of the trip was Bekal fort and beach—a majestic sea fort shaped in the form of a keyhole in the Kasaragod district of north Kerala. This was also the location where the lovesick couple of Arvind Swamy and Manisha Koirala once pined for each other in the heart-rending song Tu hi Re from Mani Ratnam’s cult classic Bombay. When I recalled visions of Arvind Swamy remaining unruffled by the treacherous waves crashing into the fort’s cold black stones on which he stood, I knew this would be no ordinary sea trip. I couldn’t wait to see this giant 17th century fortress rising from the Arabian Sea.

Fortunately for us, our travel itinerary went for a toss from the time we landed in Mangalore, which is roughly 70 km north of Bekal town. Unable to secure accommodation bookings in Bekal town, which would have been the first leg of our journey, we ended up in Oyster Opera, about 150 km away from Mangalore airport. Tired and hungry, I could have eaten a horse. But this tranquil resort, right in the middle a glimmering and vast water body, was the only balm possible for a travel-weary soul on a hot and humid afternoon. With a hartal being declared on the next day of our stay, I got an entire day to frolic in the waters, with only the boat to get around town. From an early morning swim in the backwaters to moving around in circles in a canoe, from checking out mussel farms to exploring a deserted island adjoining a little known estuary, all blue and pristine, from venturing deep into the quiet mysterium of a mangrove forest to discovering the most breathtaking sight of the endless backwaters on our way to the enchanting Valiyaparamba beach whose 24-km coastline was poetically sprinkled with sea shells, fishing nets and driftwood—a truer and more meaningful use of a shutdown had never been undertaken. Strangely enough, I kept falling and slipping all through the day, with cuts and bruises all over my sun-bleached skin. But no matter. These minor injuries had turned into small epiphanies in this land of the dancing palms.

The next day, when I set off for Bekal fort in a creaky old Ambassador, I was still in a daze—still inhabiting the unbroken realm of the greyish blue and the windy white. Nothing could have prepared me for the magic that was about to unfurl before my eyes—a spectacle of human endeavour enriching nature’s bounty. Spread over 40 acres, Bekal fort is the largest fort in Kerala and was built in 1650 AD by Shivappa Nayaka, of the Keladi Nayaka kingdom. Built purely for defence against sea attacks, more than half the fortress appeared to be impregnated in the sea, affording sweeping views of the coastline and nearby towns from every nook and cranny. Having passed through many ruling masters, the fort no longer bears its original shape and structure, although the looming observation tower at its heart, built by Tipu Sultan, still retains its former glory. I look for the tunnel from which Manisha Koirala so nimble-footedly emerged to meet her lover by the craggy cliffs in the song immortalised by Hariharan. I find it locked with a forbidding look. When I peer through one of the holes in the circuitous outer walls of the fort, I spot a cute little temple perched on a cliff at the bottom of the fort, lashed by the unrelenting waves. I want to be there. And I do not know that I eventually would. Aimlessly walking on, sometimes on paths overlooking the sea-blanched and silvery black boulders, ostensibly leading to nowhere, and suddenly here I am—a picturesque Shiva temple cresting the outermost platform of the fort, with the bright blue sea seeking benediction in waves at its feet. If this isn’t a slice a paradise, then what is?

I climb down from a corner of the cliff to reach the Bekal fort beach, beaming with pride in letting myself partake of this seaside adventure. In the crimson blush of the setting sun, the Bekal fort beach buzzes with gleaming faces of locals and tourists clicking numerous pictures, forever respectful to the looming presence of the citadel serving as the backdrop. From the father who gets chided by a security guard for venturing into the sea in his underpants to a newly wed woman striking a pose with her hand on her partner’s heart in front of a video camera, everyone here knows that this is one unforgettable trip to the sea.