The Car that Refuses to Go 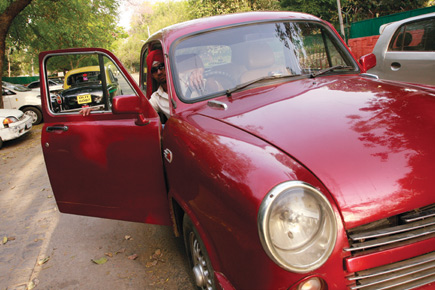 
Unstoppable. In one word, that is the Ambassador for you, literally. Look beyond the romance and its place of pride in popular culture, and anyone who’s driven an Ambassador will tell you it takes a few heart excoriating moments and a brick wall to stop it. For the Indian masses, though, it means exactly the opposite—you see the Ambassador and you stop, whether in deference to the beacon, its escort Gypsies, or simply the damage it might cause your vehicle.

The Ambassador’s pulp status has very little to do with its electronics, fuel economy, 1.4 litre engine, or brakes which struggle to bring it to a halt. Anyone who’s visited India in the past half century knows just how iconic the grand ol’ lady is. Launched in 1948, it went from being a snobmobile to a complete monopoliser of Indian roads, to an everlasting symbol of sarkari authority—a sort of Nehru cap on wheels, as it were.

The halo of romance that now envelops the curvaceous carrier, though, is fairly recent. The Ambassador owes its newfound pulp-star status to Indian kitsch. Suddenly, the world and then the Indian yuppie discovered its coolness quotient on T-shirts, on key-chains, on pieces of art, and as a piece of art in itself. Forget South Block, it has wound its way into hippy DNA, what with Manish Arora painting it alongside loud kitschy Indian icons, and the car itself flying back to London as garishly painted Karma cabs, overdosed on flower power. True, fashion and art have both appropriated other icons as well, but few as enduringly as this.

Truth be told, it’s possible to find a car with better safety features, and there are many other cars faster off the block, but anyone who has gone down a highway in one will tell you it’s like sitting on a couch in your living room. The Amby tows the fine line between nostalgia and kitsch, and does it well, thanks to expats who’re decking the car up nowadays with Cadillac detailing, wacky paint jobs, or just restoring the metal to a gleaming shiny pearl finish before wheeling it around town.

Even though the car, with the launch of Classic Ambassador, has tried muscling its way back onto Indian sales charts, there is something that has come as a body blow to its public salience.

The Indian politician has started shunning it for other high-on-comfort-and-road-presence vehicles. The Indian car market, you see, is now bustling with new gleamers of all sorts. The Ambassador, many are discovering, much like that favourite great aunt who bakes a swell Christmas Cake, is actually an Anglo-Indian. It draws its DNA from the Oxford Morris Series III.

Others argue that the Ambassador is redundant in modern Indian life—but they are only half right. At the cost of sounding soppy, the Ambassador may not be the car India drives anymore, but it’s a car that remains parked deep in India’s heart. Plus, there’s no other car that rocks a picture quite as much as a parked Ambassador surrounded by cycle rickshaws, banta sellers and the teeming masses at Chandni Chowk.