The Birdman of Sangli

A bank clerk goes deep into the jungle in search of birdsong despite threats of bears and tigers, and a miffed wife 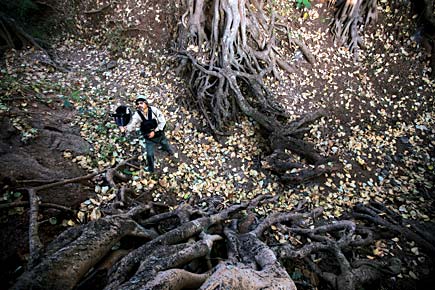 A bank clerk goes deep into the jungle in search of birdsong despite threats of bears and tigers, and a miffed wife


IT TAKES a certain kind of man to walk alone into a forest, dressed like a subcontinental Indiana Jones in a self-designed flak jacket, an omni-directional microphone in hand, following the song of a bird through the brushwood. But for him to then maintain almost 200 Excel spreadsheets of data on every bird he has encountered (sample: ‘Common Indian Nightjar 7.20 pm 7/4/98: I was recording call, seeing me bird circled around me and called like quack quack’) record every call, produce audio-visual CDs and sell them through a self-financed website pushes the limits of what typically characterises a ‘hobby’. No wonder Sharad Apte’s family prefers cats.

The Maharashtrian creator of www.birdcalls.info and the Birds of Western Ghats volumes is an amateur ornithologist who “wants to educate people about birds, the need for nature conservation and the adventures of bird watching”. He is the founder of Balbhim Vyayam Shala Nature Club, Sangli, which introduces nature appreciation and bird-watching techniques to children. Since he launched his website late last year, Apte has sold 700 units of the first volume of Birds of Western Ghats. This book contains 10 years of research material, including recordings of calls of 40 birds of the region. “It is an important contribution,” says Ashok Pittie, editor of the newsletter Indian Bird. “When you can’t see the bird, it’s difficult to make out the difference between closely related species that have the same plumage, but different calls. His work marks that difference.” Apte’s second bestseller is the Twitter clock, which notates every hour with the picture and song of a particular bird.

‘Self-’ is an important prefix to any description of Apte. What he doesn’t have, he makes himself; what he doesn’t know, he teaches himself. He lives in Sangli, 390 km southeast of Mumbai. This pro-Congress town on the banks of Krishna River is known for its sugar, Dhajiba wine (dhajiba is Marathi for gentleman), Ganpati temple and luscious turmeric. Apte has never wanted, and never intends, to leave his hometown.

Born into an intellectual (his father translated 12 English classics to Marathi) and athletic family, Apte and his siblings were an adventurous troupe who swam in the flooding river and took cycling holidays to places as far away as Hyderabad. And like Saul before he hit the road to Damascus, the teenage Apte used to hunt birds. “It was thrilling to hit a target, especially a live one. I feel bad about it now,” he says.

Now 53, Apte is the perfect model of a bird watcher. A clerk with ICICI Bank, he is calm, passionate without being eccentric, and patient. A virtue that’s helped him withstand criticism that he’s wasting time researching birds, teaching himself the vagaries of the net and figuring out the technical details of his hobby. It also makes him a conscientious interviewer. It’s just after daybreak, and as he calmly makes his way through Alate Park—a few acres of protected woodland area in Maharashtra—a number of unseen birds indulge Apte with their songs.

This morning, he’s trying to record the communiqué of a Coppersmith Barbet. As the bird rests on an ancient banyan, Apte stands beneath, hidden by foliage and fatigues, training his Bionic Ear and Booster—a parabolic microphone—in its direction and catching its mating call ‘puk-puk’ in his recorder. He then notes down his morning insights into the BVS Nature Club’s Field Data Card (again, self-created).

Apte first became interested in bird watching in 1990, after attending a WWF nature education camp. “Initially I would go out on a Saturday or Sunday and just watch,” says Apte. “Then I wanted to do bird photography, so I attended some classes. That’s when I met TNA Perumal (an award-winning bird photographer), who suggested I do recordings.” But Sangli, despite the wide roads and upcoming software technology park, is still a sleepy town, where high-end hotel rates average about Rs 1,200, and the local gym, with a Rs 40 monthly fee, teaches traditional Indian gymnastics like Mallakhamb and uses gadas and joris (clubs and maces). For a man to get started on a tech-heavy hobby isn’t easy.

He began with a basic cassette recorder and made do till he chanced upon Sheila Buff’s The Bird Catalogue on a Mumbai sidewalk. The book contained details of the world’s best recording equipment manufacturers. Apte wrote letters to every manufacturer in it: ‘I am an ameature (sic) bird watcher and maintaining this hobby since last 8 years. Bird calls is my favourite subject. I can identify at least 250 species by their calls. I now prapose to wrok (sic) on Bird call recording project. For this project I am in search of instruments specially designed for Bird call recording…. I came to know that your company is engaged in producing such instrument, I request you to send literature & price list. I am eagerly waiting for your favourable & urgent reply.’

Apte now works with a Silver Creek Bionic Booster and Bionic Ears, and a Marantz PMD 222 cassette recorder. The B Com graduate has an innate understanding of technology, though he never had the grades to make it to an engineering college. So far, his endeavours have run up a tab of about Rs 3 lakh, a steep investment for a local bank employee. The family lives in a one-bedroom apartment in its own two-storey building; tenants occupy the other rooms. Apte works in his terraced study, which is stuffed with books, registers of data and equipment. His wife uses an intercom system to communicate with him.

Apte admits his hobby tests his wife’s patience, despite the fact that he’s yet to tell her about his more dangerous forest visits, like when he was accosted by a bear and another where he passed a tiger. “I also don’t have a big social circle since people don’t understand what I’m doing.” But whether they like it or not, the family has also engendered his resourcefulness. Varsha, his wife, is a spirited Tupperware sales agent. “I hold kitty parties and have regular customers now,” says the mother of two girls, one of whom is away in Leon, France, doing a scholarship-funded Master’s programme in film and theatre. Her kitchen is a resplendent showcase for the air-tight wonders and plastic promise of Tupperware.

After all these years, the birds are giving Apte some returns, through CD sales. He calculates that he’s made about Rs 60,000 so far. “It would be great if I had sponsorship, but still, I can save a bit and the hobby funds itself,” he says. Yes, but it still takes a certain kind of man…