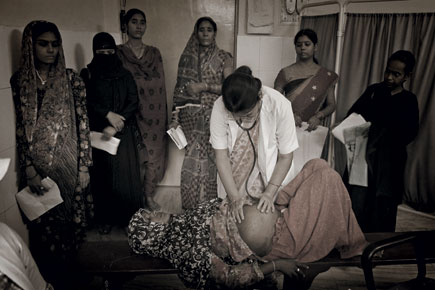 
GULBARGA ~ Five months pregnant, Ahmedbi’s haemoglobin level is 9.38, a couple of points below normal. Expecting her fourth child, the frail woman says this pregnancy is different. “Pehle khoon kam nahin thha, ab hai,” she says, watching her two-year-old daughter play outside the Mahagaon primary health centre in north Karnataka’s Gulbarga district. This time round, she adds, her treatment is different too. Instead of the traditional, government preferred oral intake of iron tablets to treat her anaemic condition, at the six bedded Mahagaon PHC, she is made to lie down and given a dose of iron-sucrose through a saline drip. Half an hour later, she is back on her feet and ready to go home, claiming she feels much better already.

Ahmedbi is one of 206 cases of anaemia recorded at Mahagaon in 2012. Besides the prescribed dose of 200 iron tablets, each one has been treated with iron sucrose. “The difference is visible,” says Dr Mohammad Sikandar Azam, who has spent nearly four years at this PHC, just off the national highway that leads to Hyderabad. “Earlier, there was no way of knowing if women were consuming the oral tablets as recommended, and non-compliance was high. The complications arising during pregnancy were also high. Now the numbers are stabilising and in the past two years there have been no maternal deaths at this PHC.”

For a district classified as a ‘backward region’, with maternal mortality rates ranging between 150 and 200 per 100,000 (as per Millennium goals, Karnataka needs to bring it down to 100 by 2012), zero is a magic figure. The vials of iron-sucrose being slowly injected through a saline drip are turning the figures around. Since it began in 2010, iron-sucrose therapy in Gulbarga district has seen an unexpected success rate. As of March 2012, exactly two years after the programme began, there have been 40,000 beneficiaries and counting.

Buoyed by the success of the simple intervention, which was earlier used in renal failure patients and the final stages of pregnancy, the Karnataka government is now funding the programme across the state.

Lab technician Kamala S spends around six hours, five days a week, drawing blood samples at the Mahagaon primary health centre. She mainly does all five mandatory blood tests for pregnant women—one to check for HIV, another for haemoglobin levels, a third to ascertain blood group, a fourth for hepatitis and the VDRL test to screen for syphilis. In most cases, the haemoglobin results throw up numbers way below the normal of 11-12 gm per decilitre of blood for pregnant women, indicating yet another case of anaemia at the health centre. The normal levels for a woman are 12-16 gm per decilitre of blood.

“The prevalence of anaemia among pregnant women is more than 70 per cent,” says Dr Shivraj Sajjanshetty, Gulbarga’s district health officer. “And it is also an underlying factor for complications during pregnancy.”

Further, the District Level Household Survey 3, done in 2007-2008, indicates that the consumption rate of the routinely prescribed 200 iron tablets for pregnant women with low haemoglobin levels is just around 40 per cent. “Because of the side effects of the iron tablet, which includes gastritis, most women would simply throw away the medicine,” says Sajjanshetty. “Also, there is a local belief that consuming the tablets would result in a big baby, in turn resulting in a difficult delivery. Non-compliance is a big problem.”

Gulbarga is not a unique district. Iron-deficiency anaemia is one of the most common problems in pregnancy. World Health Organization figures indicate that it is the most common nutrient deficiency and affects about a third of the world’s population.

During pregnancy, iron deficiency is associated with multiple adverse outcomes for both mother and infant, including an increased risk of haemorrhage, sepsis, maternal mortality, perinatal mortality and low birth weight. It is estimated that nearly all women are to some degree iron deficient, and that more than half of all pregnant women in developing countries suffer from anaemia.

Further, according to the WHO, for populations with a prevalence of anaemia greater than 40 per cent, ‘the prevalence would be interpreted as being severe in terms of public health significance’. By that definition, in Gulbarga it has been a serious concern for the district administration.

Across health facilities in Gulbarga, doctors were coming across pregnant women with hypertension, decrease in urine output and cases of fits. A lot of patients were also reaching health centres with excessive bleeding. Maternal audits in the district were consistently flagging such cases.

Traditional treatments in such cases involve oral iron therapy and blood transfusion. Both have their drawbacks. High doses of oral iron intake have side effects that results in non-compliance, while blood transfusions carry the risk of infection and are, therefore, used only in the most severe cases. Besides, neither was very effective.

Treating anaemia ‘efficiently’ using the alternative iron sucrose therapy has been prevalent in private medical practice, and it is from one such facility that Dr Vishal R, former deputy commissioner of Gulbarga and now director of the National Rural Health Mission (NRHM), got the idea to use iron sucrose to treat anaemic pregnant women who kept walking into various health centres across Gulbarga district.

Aware of the fact that maternal mortality is often under-reported and alarmed by the data collected through independent surveys, during his tenure as deputy commissioner of Gulbarga, Dr Vishal decided to use a part of the Backward Region development fund to procure vials of iron sucrose.

“We ensured strict monitoring to ensure there were no allergic reactions, record keeping was improved, and the entire approach to treat pregnant women was changed,” says Dr Vishal. “In the odd case of an allergic reaction, we have withdrawn the entire sample lot. The treatment cost the district administration around Rs 65 per patient, including the cost of saline.”

In March 2010, before the programme was started in Gulbarga, all health workers and nurses were given a thorough briefing on how to spot symptoms of anaemia and underline cases of non-compliance. They were asked to check for swelling in the feet, headaches, gastric pains, sudden weight gain and urine output. Slowly anaemia became a buzzword across the district’s health centres.

“As we routinely started administering iron sucrose, we started seeing results,” says Dr Vishal. “In every case, there was at least a couple of grams of increase in haemoglobin levels, which in turn helped make up for the loss during childbirth also.”

At the Mahagaon PHC, 138 babies were born between April and September. At the Gulbarga district hospital, an average 300 are born every month. And the iron sucrose therapy has ensured that most of their mothers have the right numbers on their blood reports.