Contrary to popular belief, sugar-free products do not really help us lose weight. 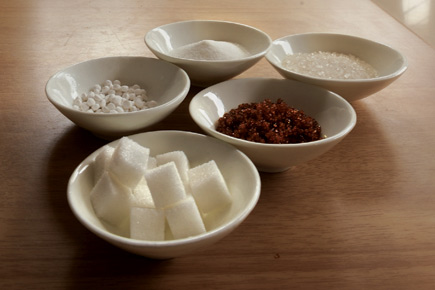 Contrary to popular belief, sugar-free products do not really help us lose weight.


Ever noticed how cluttered it’s got? The sugar bowl, that is. At upmarket cafes and restaurants, it’s often more crowded than the tables. There’s always plain white sugar and brown Demerara. Squeezed inbetween are artificial substitutes, stacked in pink, yellow or blue sachets. Given all the choices crammed into it, perhaps this tiny holder should really be called a sweetness bowl. After all, it’s open to those who want sugar, as well as the diabetics and weight-conscious among us who seek substitutes. But all of us who measure out our lives and waistlines in tea and coffee spoons, by stirring in an artificial sweetener, should listen up now. Leading health experts and scientific researchers believe it’s time we all woke up and smelt the saccharine.

“The verdict is out—no one has ever lost weight because of a sweetener,” says nutritionist Rujuta Diwekar, author of the bestselling Don’t Lose Your Mind, Lose Your Weight, who’s equally famous for downsizing the already slim Kareena Kapoor. Sharing a suppressed truth, she adds, “Sweeteners confuse the body, which then demands calorie-dense food immediately.” She stumbled upon this observation while at work, and her views are supported by science. “I wrote most of my book at Costa Coffee, where I’d notice people using sweeteners and then grabbing the biscotti, often asking for seconds.” That’s why she first counsels her weight-loss clients to revert to sugared tea or coffee and note how they feel. Diwekar’s advice: “Listen to your own tongue rather than advertisers. Your taste receptors can discriminate between sugar and sweeteners.”

It’s not just receptors on the tip of our tongues, even our brain refuses to be fooled by fakes. Last year, a researcher at the University of Colorado in Denver, USA, fed 12 women sugar and an artificial sweetener. He then mapped their brain responses with functional magnetic resonance imaging (fMRI).

The evidence lit up right before his eyes. Pleasure zones or reward areas of the brain glowed more strongly with sugar than with the substitute. While the sweetener made participants feel good, they did not feel satiated. The researcher concluded, “This might make you eat something sweet or calorific later.”

This metabolic letdown when your brain is cheated of sugar was confirmed by a University of Birmingham study that asked cyclists to rinse their mouths with glucose and saccharine. Those who tasted glucose pumped their tired legs harder. When researchers added a non-sweet but calorific sweetener called maltodextrin, again the cyclists who tasted this outperformed the saccharine rinsers. They concluded that the brain can detect even a hint of sugar, and that the promise of nectar made the cyclists grind down harder on their pedals.

So, a hundred years after racing down the sugar substitute route marked by white milestones like saccharine, aspartame, sucralose and stevia (more recognisable by brand names Equal, Sugar Free and Stevia), we’re right back to where we started, staring at sugarcane fields.

If we deprive our body of sugar, it’ll strike right back by making our hand reach for a jalebi or muffin.

Confirming this view, Dr Anoop Misra, director of diabetes and metabolic disorders at Delhi’s Fortis Hospitals, says: “This is a valid reason for not prescribing artificial sweeteners to non-diabetic people.” He cites a study where subjects on artificial sweeteners gained more weight because the brain’s satiety centres sought ‘more and more’ simple sugars. However, when Open tried to reach leading sugar-substitute manufacturers, none responded with their views on this health issue.

So, what is the best route to take as Shining India goes through a dietary transition, as we go chomping our way through packaged foods and ready meals that are high in sugars and refined carbs? India is the world’s largest consumer of sugar and also the world’s diabetes capital. Underlying this is the fact that we’re unfortunately endowed with bad biology; a fourth of urban Indians are estimated to have metabolic syndrome, which includes insulin resistance.

But even for this vulnerable population, experts advocate a cheeni kum lifestyle: “Moderate amounts of natural sugar such as jaggery and honey and 40-45 minutes of physical activity,” advises Dr Misra. In fact, he doesn’t see any reason to use sugar substitutes for weight loss. “Overall calorie reduction, reduction of carbohydrates and fats, and regular exercise makes more sense than using artificial sweeteners.”

For diabetes patients too, sugar isn’t viewed as terrifying kilojoules. In a calibrated response, Dr Sujeet Jha, head of metabolism and obesity at Delhi’s Max Hospital, says, “We don’t restrict diabetics from sugar, but we advise moderated consumption.” At the same time, he is not averse to the use of sugar-free products in “moderate quantities”.

Medical experts outside the diabetes forum aren’t advocating sweeteners at all. They’re keen to expose the false effervescence of diet drinks. “Sweet and high fat foods light up pleasure pathways in the brain that motivate us to eat and drink more even when we are full,” says Dr Sarita Dhuper, director of childhood obesity at New York’s Brookdale University Hospital and Medical Centre. A sugared drink, even pure fruit juice which contains 100 per cent fructose, has this impact. So do diet drinks. “Liquid calories cause a blood sugar spike, and then a drop. These tumultuous dips make you hungry, irritable and eventually cause an addiction.” Her concern is that liquid calories do not grant satiety (because of their low density). This makes people consume upto 1,000 calories extra per day.

Like sweeteners and biscotti, “We see that diet drinks and burgers represent a contradiction,” concedes Dr Jha. While he maintains that ‘sugar free’ is an option for borderline diabetics, he also warns, “Do not confuse this as treatment.” Diwekar says,“Sugar is not the villain we have made it out to be, it was only meant to be consumed at 12 Indian festivals during the year.” Apples, bananas, rice and wheat are naturally sweet. “Nature thought of us in terms of nourishment, not calories,” says Diwekar.

The trouble began when we started to hoodwink our bodies with ‘fat free’ foods. “As fat became the demon ingredient in the 80s, sugar substituted it,” says Dr Dhuper. To fuel this, the industry needed to turn out cheaper, more processed and sugar-loaded foods. The mechanisation of corn farming fed into this by eventually yielding high-fructose corn syrup. Cheaper than sugar, corn syrup became a necessary ingredient in most packaged foods—from ketchup and yogurt to sliced bread.

“With high fructose corn syrup, they changed something pleasurable into something cheap and available, so you couldn’t stop people from running to it,” explains Dr Dhuper.

Earlier this year in America, Domino’s announced it was ‘revitalising its pizzas with a sweeter sauce’. According to a UK report, major food groups are sweeter than they were 30 years ago. This includes cereals, breads and fruit. With a few gleeful licks, people have adapted to this sweeter new normal and loosened their belts a few notches.

In an interview with Salon.com, Dr Brian Wansink, a satiety expert, explained the explosion of sweet-savoury foods: ‘There’s only so much popcorn or M&Ms (chocolate coated with hard candy) that you can eat. But if you dump M&Ms on popcorn, you can eat a ton (of both).’ This combination keeps people munching for far longer ‘because your taste buds don’t burn out’. The next time you’re at an upmarket theatre asking for caramel popcorn, think of those kernels as a sucrose delivery device.

We’re living in a state of caloric excess, and we don’t have the biological armour to battle this sweet onslaught. Marketers have forecast that sugar consumption in India is about to increase by 27 per cent to 24.7 million tonnes over 2010-11. Gourmet sugars are like the icing on this market. Leading importer of epicurean products, Anil Chandok, CEO of Chenab Impex, has a portfolio of seven gourmet sugars. These include rock sugar, which is purified with a diamond-quartz process, pure unrefined Demerara and richly flavoured dark sugar.

Driven by taste and availability, Chandoke expects the gourmet sugar market to “grow at about 25 per cent per year”. With so much available, don’t wreck your health with poor choices. Eat natural sugar, but not too much. Your brain doesn’t like to be fooled by imitations. Spoon those up, and your body will demand the revenge of sweetness.