Save What You Savour

The uniquely spicy flavours of Mudaliar food are in danger of being lost to future generations. Thankfully, some cuisine conservationists are at hand 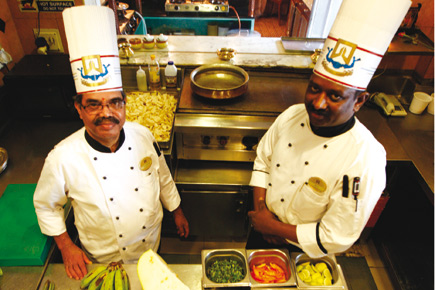 The uniquely spicy flavours of Mudaliar food are in danger of being lost to future generations. Thankfully, some cuisine conservationists are at hand


Fragrant and flavoursome, Mudaliar dishes are garnished with legends and folktales. As the tale goes, this rustic peasant cuisine from the northern part of Tamil Nadu first shot to limelight in the 5th century, when a Chola prince put a few dishes onto the royal menu. It took little time for Mudaliars, a community of farmers with a reputation for turning arid land fertile, to swaddle palate after palate with their culinary delights.

Over time, the community broke up into smaller subcastes, and this, together with migration, led to a dilution of the original flavours. Mudaliars who moved to Karnataka and Andhra Pradesh, for example, saw their kitchens succumb to the spice mixes and cooking techniques of their adoptive lands. Today, there aren’t many left who are familiar with the ancient aromas that had once bewitched a Chola prince.

Thankfully, cuisine conservationists are at work, and if the efforts of a couple of chefs and lone cookbook author succeed, Mudaliar dishes could be taken off the endangered list. “Tuluva Velallers and Vellars, as Mudaliars are known in South India, are divided into 26 subcastes,” says Master Chef Velumurugan P, a Mudaliar from Chennai who is in Delhi to get diners tasting and talking about the cuisine at a food festival at WelcomHotel’s Dakshin restaurant. “Today, half these subcastes, like Saiva Mudaliars, are vegetarian, and others such as Pillais are non-vegetarian,” he adds. Nobody knows whether the original Mudaliars were meat eaters or not.

Also, the cuisine has evolved in varied ways to suit local taste buds in places to which members of the community migrated. For instance, Mudaliars today in Kerala make liberal use of coconut and coconut oil, which gives the original cuisine a new mouthfeel and flavour accent. “The ones staying in Karnataka have made the traditional dish bisibele bhath their own. Hyderabadi Mudaliars make pulaos with a lot more chillies than we do. Their pickles are excellent and are mostly Andhra recipes. Nagpur and Amravati Mudaliars have tastes more like Maharashtrians,” explains Sabita Radhakrishna, a writer, food columnist and broadcaster who has been researching Mudaliar cuisine for the past decade now. Her cookbook, Aharam, which is an invaluable record of about 175 authentic Tamilian dishes, won the prestigious Gourmand World Award for the Best Indian Cookbook in 2002.

Research has shown that Mudaliar food is distinctive. It is not as spicy or oily as Chettiar cuisine, nor is it staunchly vegetarian like Thanjavur preparations. “This is a non-Brahminical cuisine which uses the best of both vegetarian and non-vegetarian ingredients. However, unlike other southern fare, there is no use of pork or beef,” says Executive Chef Raj Kamal Chopra, who has organised Dakshin’s showcase of endangered cuisines.

Though Mudaliar cuisine has now become a medley of different gastronomical genres, there are still some ingredients that have survived in their original form down the ages. Take the vadakam, for instance. It is a spice mix which no true-blue Mudaliar household can do without. A kind of tempering ball, it is made with garlic, onions, mustard seeds and curry leaves in a long-drawn process. Once all the ingredients have been blended to perfection, the mix is dried in the sun everyday until all the moisture is absorbed. “If the weather is extremely hot and sunny, the vadakam would take about two weeks to be completely dry. This mix is then moulded in the form of small lime-shaped balls and stored in glass jars for years,” says Sabita.

Heaped teaspoons of this fragrant spice blend are used to temper fish curries, dal, tamarind curry and some types of mutton dishes as well.
Brinjal is another ingredient that Mudaliar chefs are fond of. In fact, till some time ago, Mudaliars were known as ‘brinjal people’. To others, the aubergine might be bland, but it assumes a whole other persona as part of this unique cuisine. Known as kathrikai, brinjal is used to flavour spicy tamarind curries, or just sun dried for later use. “Kathrikai chops made with onion, tomato, peppercorns and coconut masala are a speciality in our family,” says Chef Velumurugan. A daily meal at a traditional Mudaliar household tends to include brinjal in one form or another, be it kathrikai with Bengal gram, mashed brinjal with mashed moong dal, or kathrikai with sun dried tomato. “Mudaliars also happen to be very fond of drumsticks. The flowers and leaves of drumsticks are used avidly in dishes as well. Another unique ingredient used in the cuisine is kalpasi or blackstone flower. It is a rare dried flower used often as a spice,” says Chef Velumurugan.

Mudaliar cuisine shares some traditions with other southern culinary genres too. Cooking goat meat with an assortment of vegetables and herbs, for example. One of the most popular vegetables used with mutton is mochakka, shelled beans of a kind abundantly available in south India. In traditional Mudaliar families, like Sabita’s, mochakka is used to make a special dish called peratel, which is a thin soup-like gravy made with mutton, potatoes and these beans. Each household has a secret recipe which is closely guarded by family members. “One such dish is chuppal kari in which meat and garnishes are skewered and then gently cooked with aromatic spices,” says Sabita.

It is not just the flavours that are distinctive, but the cooking apparatus as well. Take vengalam paanai, a metal vessel commonly used for serving food in the olden days. Like copper and stone utensils, they were believed to have medicinal properties.

Fish curry was always made in an earthen pot and it was believed that the taste improved manifold when left in it for a day or two. Rasam was made exclusively in an eeyam, a lead vessel, and a kal chatti was used for mashing dal or spinach. “Kal chattis were used in days when food processors were non-existent. These unique vessels were embedded with small stones so that dal or green leafy vegetables became pasty when ground with a pestle. These were used on wood fire as well, but had to be seasoned first by pouring hot rice conjee and leaving them overnight. This way, it didn’t crack on the fire, and the stone was supposed to imbue the food with certain minerals,” explains Sabita, who still uses these old treasures, much to the chagrin of her house help who finds them too heavy to handle.

Yet, for all the effort, gastronomical wonders like these could soon vanish, with millions of people left without even a chance to savour any of it. Chef Velumurugan and Sabita apportion blame for this to India’s Mudaliars themselves. Even though food means a lot to them, they have not done much to popularise or preserve their cuisine for posterity. The duo hope that just as Chettinad and Kongunadu cuisines have spread their flavours across India and the world, Mudaliar fare too will get a chance to break out of its current cocoon.

Orthodox Brahmins often shun the cuisine because of its use of onion and garlic, but that shouldn’t be a deterrent in this day and age. “It is those Mudaliars who have migrated to the US, UK and Australia who are willing to get back to their traditional way of cooking, despite some of the recipes being so complicated. I wish a similar response would be seen in India as well,” sighs Sabita.