Red Light streets are yesterday. Mobile phones. Residential colonies. The suburbs. Housewives. Students. The pimps show us glimpses of the changing profile of the sex industry 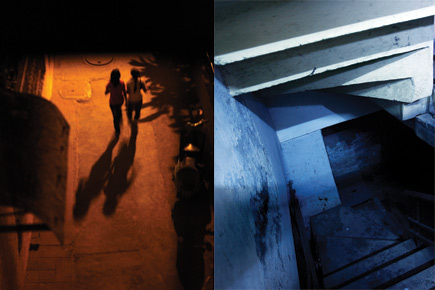 
After an entire day of chasing her, Razia finally relents and agrees to meet. Dressed in a baby pink salwar kameez, dupatta draped over her head, Razia is an attractive woman in her late 30s.

She is a very busy person. Her day was spent fixing a Rs 20,000 deal. She opens her wallet to count the notes another customer had handed her a little earlier. She counts seven Rs 100 notes. Ask her how much she makes a month: “There is no limit in this business.”

Razia handles a ‘high profile’ clientele—judges, property dealers, police officers. Some of her old customers still request her own services. But she has seven girls who work for her now. They include a Delhi University student and a telecom company salesgirl. Her biggest deal so far fetched Rs 1.5 lakh. “There are enough and more people willing to throw that kind of money,” she says. Her latest asset is a teenager from Meerut, who has only recently been initiated into the business by a ‘friend’, who is also the girl’s aunt.

Razia also makes money from students who use her house for business. She introduces her own customers to them. “Why shouldn’t I take advantage of such a situation? Why should I rent my place if it does not serve my business?” She tells the girls that they can use her premises provided they agree to service her customers.

This interview is being held at the office of Jagriti Yuva Manch, an FSW (female sex worker) project in Babu Nagar and Meet Nagar—Delhi’s suburbs located to the east of the river Yamuna.

In the next room, a meeting is underway. There are five pimps in attendance—no ordinary feat that, getting pimps to show up for weekly meetings. Referred to as ‘peer educators’ in NGO parlance—pimps don’t take kindly to external interference. It took Jagriti Yuva Manch a whole year to get through to Razia and get her to admit that she was running a business. Field workers spend months observing ‘hotspots’—pick-up points—gathering information from rickshawallas and paanwallas before the trail leads them to the pimp’s door. Much cajoling and confidence-building later, the pimps are brought on board. Without the pimp’s goodwill there is no getting access to the target group—sex workers.

All of them women, the pimps at the meeting are in their 30s, 40s and 50s. Sex workers at one point, some of them still practice. Each must be quite intimidating in her role as pimp. Dealing with corrupt policemen, local criminals and errant customers is not for the faint-hearted. In here, however, the mood is very different.

One of them, Geeta, has been recently re-united with a lover, who two months ago was released from Tihar jail. A tall fair woman in her early 40s, dressed in a beige salwar kameez, a bead necklace and orange lipstick, Geeta has everyone in splits in a bare-all discussion about her sex life. But it feels like a scene from a black comedy. There is plenty of sex and even more abuse. And the way she tells it, the violence in the story is rid of its tragedy. For all the laughter she excites, she paints quite a dark picture.

Then there is Sheela, the most prosperous and garrulous of the lot. Majorly into appeasing a variety of gods, Sheela spends a lot of her time and money in prayer and ritual. “Main sharab nahin peeti, gutka nahi khaati, koi nasha nahi karti. Pooja paath mein vishwas rakhti hoon  (I don’t drink alcohol, don’t chew betel nut, have no addiction. I believe in prayers and religious practice).” Sheela’s house, says one of the outreach workers, has more idols than a temple does. “She likes to wash off her sins,” she jokes. Before she became a pimp, Sheela worked at the Tis Hazari court as a cleaner. Her first customers were lawyers.

As her network grew, she decided to delegate work. Now she mentors others on how to run a business.

She is a riot. Two nights ago, she apparently made a client pay her for just letting him sit next to her for half-an-hour. “Usko bethake mainey kaat diya 1,500 rupiah. Sirf bethake. Sabko pata hai ki ladkian to roz chalti hain, par madam to kabhi kabhi chalti hai  (I charged him Rs 1,500 for just sitting with me. Everybody knows, girls can be had everyday, but you get a madam only occasionally).”

“The pimp usually has about four or five girls who work for her. Sometimes she sends them on contracts to places outside Delhi for 10 days or a week, say for about Rs 10,000.  Pimps also make money by renting space at home for the sex work—say Rs 100 for one hour or per customer,” she says.

On the pretext of working in a factory, housewives travel to localities other than their own. If she is a street-based sex worker, she solicits customers from ‘hot spots’ and then takes them to ‘space providers’ or a pimp’s houses. Or else, she goes to the pimp’s house, and the pimp brings her customers. They make anywhere between Rs 300 and Rs 500 in a day—working from 10 am to 5 pm, after which they return home.

A sex worker gets about six customers a day, and so she makes about Rs 1,000. The rickshawalla (in case she is a street-based sex worker) and the pimp get their cuts. A sex worker never solicits customers from the localities she belongs to. She always works in a neighbourhood other than her own. It is mostly housewives who are involved in this trade. They are usually strapped for money because their husbands either don’t work, or, even if they do, don’t provide for the house.

Customers are of all types and all classes. Mobile numbers are passed on by word-of-mouth. Home-based sex work is not in-your-face like at GB Road. So the risk of raids is much less. When a sex worker has managed a big enough network of customers, or does not have the stamina to carry on, she becomes a pimp.

“The pimps cooperate with us because they see us as being good for their business. Healthy girls make more money. Condoms are distributed to them for free and we also treat them for STDs (sexually transmitted diseases),” says Vibha.

The sex industry is increasingly moving out of the red light areas and into urban and suburban neighbourhoods. It now merges seamlessly with the rest of the landscape. One house here, one house there. Its low visibility makes it low-risk, and very business-friendly. So while Delhi’s red light area has 4,000-odd commercial sex workers, the city has around 9,000-odd home-based commercial sex workers.

INSIDE A PIMP’S HOUSE

Sultanpuri is a North West Delhi suburb that is becoming notorious as a hotbed of the sex trade. In the last two years, the number of commercial sex workers identified by Drishtikon, an NGO that provides healthcare for commercial sex workers, in Sultanpuri and surrounding areas went up from 800 to 1,800. Here too, the pimps run the business from their houses. Sometimes, an entire street is occupied by them.

On one such street lives Shashi. It is a narrow run-down alley, just off the main road. A woman in her 50s, Shashi sits sprawled out on the floor, against a large bed. Small, stuffy and dingy, the room reeks of a smell of curdled milk.

Shashi is a tall, dark, hefty woman. On the floor next to her, a baby is asleep. There is another child sleeping on the bed. A third grandchild, a girl of six or seven years of age, is watching TV. A dog stands guard at the end of the narrow flight of stairs that leads up to this room, which essentially makes up the entire living space. The room above is where the sex work is carried on.

There are two girls—in their late-teens—also in the room. One of them, Deepika, is here everyday from 9 am to 5 pm. She tells her family she works in a factory. The other girl Rani works as a domestic help. She lives down the road and comes whenever there is a customer.

As Deepika settles down to talk, her mobile phone rings. She has a customer. She leaves promptly. Meanwhile, Shashi begins to talk about business.  She relates a bone-chilling story of a  child sex worker who was with her for six days. She was found dead, naked and brutalised, in the woods. “Terah saal ki thhi… mujhe uss ladki ko dekh ke taras aa gayi. Bihar se thhi. Mere yahan woh thhi din rahi. Chhe din mein maine teen kaam karaya usse. Bacchi thhi (She was 13 years-old… I felt pity for her. She was from Bihar. She stayed with me for six days, and did three jobs. She was a kid).” The customers, she adds, would offer her Rs 500 for the girl. “Kaam karne laayak hi nahi thhi, kam umar ki thhi, mar jaati toh… (She was  not fit for work, she was under-age, what if she had died…)” So Shashi traded her for an older Nepali girl. Fifteen days later, the child’s naked body was recovered. Her new owner had sold her for the night to three men.

Sitting inside her house and listening to her talk, civilisation seems like a vague dream. It is just another day in Shashi’s life. It is a business. And she runs it ruthlessly.