No Room of Mine

In a life crowded with inspirational women between the ages of 90 and 5, I haven’t met one who needed a room of her own to accomplish what she set out to do 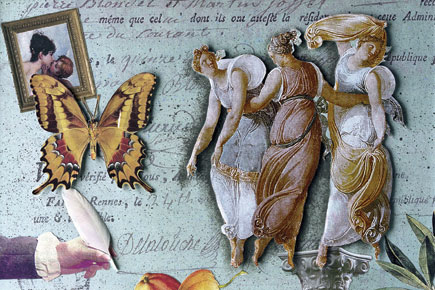 In a life crowded with inspirational women between the ages of 90 and 5, I haven’t met one who needed a room of her own to accomplish what she set out to do


All my years in college, I spent hours in the campus café, talking writers who habitually wrote in cafés. Yet I never could see the point of the guy at the next table scribbling away in the midst of chaos. It seemed an affectation. French, certainly. Possibly Argentinian. Anything that went into his notebook, I thought, was likely to stay there. He could have been taking notes, but I knew instinctively he wasn’t.

He was writing his soul out, and how could he? When I wrote, it was always in a room of my own.

I completely overlooked the fact that I had written nothing at all.

True, somewhere on the planet there was a whole forest missing as a result of the hours I spent at my desk. I had dog-eared notebooks and rolls of paper covered with cramped and anguished script to prove it. And all that labour was for a readership of one. It was so sacred that even I couldn’t bear to read it. There were periodic incinerations, smelly messy rituals that left the family coughing for days. Gentle hints that the paper might be used to line cupboards instead was met with scorn. (Computers were still things other people used, people who did not write in a room of their own.)

What was it all about? Life, absolutely. But the life I put down on paper was nothing like the life I led. My life was tumultuous, not just exciting. The stuff I wrote was dull. Terribly worthy, deeply political, ceremonial examinations of the state of being.

For the rest, most of what I read seemed putrid with angst. I didn’t need a callow psychiatrist to tell me the navel is a shallow cicatrix: plumbing its depths was never my idea of good writing, anyway. What was left to write about?

By now, writing had become a responsibility, one that I seemed determined to evade. I had lived a long while in a room of my own, why couldn’t I write about it?

Recently, speaking about this dilemma with a group of writers, I was sharply rebuked. Didn’t I know, wasn’t it perfectly evident that Virginia Woolf’s celebrated essay wasn’t about an actual room, but the emotional space it implied? Didn’t I realise what we women writers needed was to slam the door shut on the world so that we could write in peace?

I couldn’t answer then because the phrase ‘we women writers’ terrified me. We’re a species now? What are we? Women who happen to write? Or writers who happen to be women? Just which is the happenstance?

Virginia Woolf would have had no trouble answering that. She was a writer. Her essay transcends gender. Its very skill of expression defeats its purpose. It has escaped its brief, and assumed the autonomy of art. It does not argue for feminine thought any more than La Gioconda can argue for feminine beauty. It speaks, and we listen. I, for one, listen humbled by her genius, dazzled by the beauty of her language, delighted by her wit. But I would not dare presume a share in these attributes simply on the basis of a hormonal sisterhood.

That’s the bitter truth of it. Not every woman who picks up a pen is Virginia Woolf. We are, believe it or not, just as clumsy as the next guy who writes. Just as much at a loss for words, just as spooked by life or the lack of it.

Virginia Woolf contradicted her famous essay with Orlando. It could be argued that an Orlando existence is possible only if one has the income Woolf demanded—but that’s economics, and I’m talking fiction here.

In a life crowded with inspirational women between the ages of 90 and 5, I haven’t met one who needed a room of her own to accomplish what she set out to do. Most would have been puzzled by the very concept. They may have admitted, ‘Yes, some women may need that space, poor things,’ knowing their own lives have assured these unfortunates of a place in the sun.

If I look closely at these women, I find a startling paradox. They have all faced the misfortunes, social and biological, that ‘women’s writing’ whinges about. But they haven’t endured them. They have respected the biological imperative to refuse pain and evolved strategies to overcome it. Every organism, from the unicellular bacterium up, knows that’s what life is all about. The lives of women, the lives of Indian women have always been propelled by that compulsion. If men think we’re patient and forbearing, why disillusion them?

So it does seem as if that dubious genre, ‘women’s writing,’ has been in a sulk a very long time. And to those who think we’re about to liberate our grandmothers through what we write, I’d like to recommend that classic anthology, Women Writing in India: 600 BC to the Present by Susie Tharu and K Lalita.

A quarter century before Virginia Woolf’s brilliant tantrum, a writer of smaller talent dared a larger dream. Rokeya Begum’s Sultana’s Dream, published in 1905, is closer to what women of this country have always yearned for.

Virginia Woold wrote her essay when she was 47. I was 12 years younger when I decided to ignore it.

One rainy morning I went to Bombay Central Station to receive my aunt. The train was six hours late and returning home was not an option. It was pouring, and my aunt, a stranger to the city, would be alarmed if she wasn’t met. There was nothing to do but wait. The walk to the call box at the end of the platform left me drenched. The best seat I could find was a trolley that stank of fish. The bookstall was shut. I had nothing to read. The platform emptied rapidly. Very soon I was alone except for a few disgruntled birds on rafters above.

Cold, hungry, uncomfortable, I crouched in unpunctuated misery till the rain thinned.

An announcement, disembodied, hortatory gobbledygook, brought in a dispirited trickle of anticipants. They waited around awhile, then left when nothing showed on the horizon.

Just ahead of me was a woman with a little girl of about nine. In a few minutes, the taut line of expectation in their figures slumped, and they began to walk towards the exit. As they passed me, the little girl said, “Ma, I want to write my autobiography.”

I was startled. So was her mother. She stopped and stared at her daughter, a parent no longer, just one woman regarding another with incredulity. “Why would you want to do that?” she asked.

The next moment she had recollected herself. I heard her say, “Then let’s stop and buy a new notebook on the way home.”

But the question stayed with me.

I had, as always, some bit of paper about me, but this morning I had left my notebook at home. All I had was an old envelope, creased after its sojourn in my bag. It had contained nothing very interesting. It had been mailed to me by a stranger from an address I did not recognise.

I wrote only with a thick-nibbed fountain pen, in dense black ink. Now all I could find was a blunt pencil with a chewed end. It wasn’t even mine. All writing implements were popped into my bag as a matter of course, and this probably belonged to the carpenter who had been measuring the kitchen for shelves.

I describe these things from memory. Then, I noticed nothing except relief. I was still writing two hours later, when the train came in.

Wisely—or warily—I didn’t look at that envelope again. The next day, on my way to work, my detective Lalli appeared on the back of the bus ticket. I’ve known her 14 years now, and she surprises me every time.

The story that began on that envelope got written, like the others that came with it, slowly over the next 15 years—on railway platforms, park benches, staircases, foyers—places where the lives of others intersected briefly with mine. When I eventually found it possible to write at my desk again, I realised I was no longer in any room I recognised. The sun beat down on the page, the wind took charge of the story. And I?

I wasn’t even there.