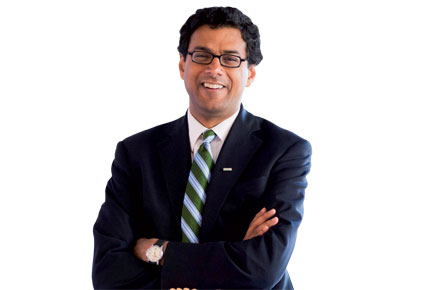 One of the finest contemporary writers on the subject of modern medicine and human life, Atul Gawande is a renowned surgeon, professor and public health researcher. In three bestselling books—Complications, Better and The Checklist Manifesto— he has immortalised the life of a surgical resident and looked at how to improve our experience of medical treatment. The recipient of the 2014 Lewis Thomas Prize for science writing, two National Magazine Awards and a MacArthur Fellowship, Gawande has been named amongst the hundred most influential thinkers by Foreign Policy and Time. Executive director of Ariadne Labs, a centre for health systems innovation at Brigham and Women’s Hospital, where he practices general and endocrine surgery, and co-founder and chairman of Lifebox, which implements systems to reduce surgical deaths, he is also professor in the department of surgery at Harvard Medical School and that of health policy and management at the university’s School of Public Health. The superstar doctor with many vocations, a staff writer for The New Yorker magazine since 1998, spoke to Open. Excerpts:

You ask: ‘Is someone with terminal cancer, dementia or incurable heart failure dying, exactly?’ Do we have a different understanding of disease today than we did fifty or hundred years ago, as we do about dying?

In a way it’s a different understanding of medicine. We’ve had this century when we’ve discovered this incredible ability to reduce suffering for everything; we want this capability. We have enormous hope that we have knowledge that can help when we have a problem. Yet we have doubts whether we can trust the system or not. Our hopes and difficulties lie in dealing with the limits of medicine. We have such confidence that we almost come to a place where the problems of ageing get treated in a hospital like just another problem.

You’ve been brutally honest about the shortcomings of medical care. Has there been any blowback?

I’m making things more difficult at times. This book is about discussing the problems no one wants to discuss. I’m a little bit scared each time, about angry colleagues, but I’m starting to find that colleagues were saying that these are the same problems they were struggling with. All I’ve done is named and voiced difficulties and struggles that all doctors have. My dad, when he was alive—he was a surgeon—would say to me: your writing is good for patients, I’m not sure it’s good for doctors. We would argue about this.

Are Indians thinking enough about quality of life towards the end of it, the thesis of your book?

My grandfather lived to a 110 and he never wanted for support and help. He was surrounded by family, 13 children, head of the household; when family came to the room we all bowed down at his feet. He couldn’t listen except for this red rubber tube we would shout into, yet he could live to have his choices respected till the end. But it only worked because the young women were enslaved. Their choices were expected to revolve around serving the parents.

The first thing that starts to happen in an economy that is improving is pensions, so the elderly can live with some independence. We are seeing this in Korea, in Japan; the elderly often prefer to live with that independence. The kind of place I was struck by in India was the pay-and-stay home. There are one or two housekeepers who maintain the family, but the elderly feel they have no purpose. They were safe, and they were lonely.

Modern economy comes from giving young people freedom. It gives them the freedom to work and live and marry where they want, leaves the elderly behind. I’m really struck by the popularity of Chetan Bhagat’s novels, they bring this home: an ambitious young child leaves the family to get an education, works at a call centre and falls in love with a young girl, won’t go home and take care of their parents. The young want freedom but they feel guilty. At the same time, it’s not ‘either or’. We’re just making better lives for people who are 20, 30, 40.

What would you advise people to do as they plan for old age?

We don’t have the language to ask: what are the trade-offs you are willing to make and not make? Once I understood that the important things to him were still being unable to interact socially, have his pain under control, we decided my father wouldn’t want to live out his last days in the hospital. When the young and the old get separated, it is thought that the hospital will take care of it. The hospital is meant to take care of your health and survival and safety, but we care about more than safety. We want to be in control of our lives.

Do you think hospice care has a future in India?

It’s very much a nascent creation. There are hospitals in the big cities which choose it for that last phase when treatment is only causing suffering, and people want the control of being in their own home. Right now, it is largely used by high income hospitals. The funny thing is it’s less costly than the hospital.

How does writing inform your medical practice?

It’s seamless. I identify problems in my writing which I address in my research, then in my practice. I didn’t know how to get past the idea of subjecting people to treatment that probably wouldn’t do any good. My effort to find a better way ended up influencing how I practised. Then, how I spoke to my father.

Is there a modern ars moriendi (art of dying)?

I’m definitely trying to paint a picture of the new ars moriendi. Then: you take care of yourself and your family all the way to the end, learn to accept your fate, give yourself to God, ask for forgiveness, and that is a good dying. Now, it is having a conversation with your own family and doctor, letting them know what you would accept or not, being your own priest. That is the art of ageing and dying together. It’s much harder to know now. The art is being able to draw the line, to say: I will not sacrifice this. The goal is not a good death—it’s a good life.

Diana Athill wrote recently that death was basically nothingness, she wasn’t afraid of it. What are your personal ideas about dying?

We all have ideals aside from living long, including loyalties to ideas and commitments larger than yourself. It is possible to have a life worth living even when your body is not what it used to be. I’m clearer now about how to hold on to the things I care about and want to achieve. I’m not as afraid, after writing the book, about my ability to still do things I look forward to.

What are you working on next?

I am writing articles about healthcare, ObamaCare. There is a set of research projects where I’m testing approaches to care; Ariadne Labs tests ways of improving health systems around the world. A large project in Uttar Pradesh with the Gates Foundation, a Community Empowerment Lab, uses coaches to work with nurses who do home deliveries. In South Carolina, US, Eastern Europe, a lot of testing. Operating too, of course.

Would you ever write a novel?

Related Article
Courage in the face of Death