In Search of the Smell of Rain

A group of art students learnt synthetic biology to make bacteria produce the smell of rain in a lab. They almost succeeded. 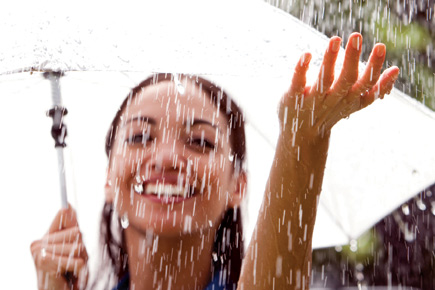 A group of art students learnt synthetic biology to reproduce the smell of rain in a lab. They nearly did it.


As an artist and teacher with Srishti, a design school in Bangalore, Yashas Shetty’s knowledge of synthetic biology was zero. Two years ago, in what was the first programme of its kind in the country, he became artist-in-residence at the National Centre for Biological Sciences (NCBS). It was an experiment. Whenever he had the time, Yashas would go to NCBS and just hang out there. The idea was to see what would happen when an artist starts talking to a scientist.

Shetty’s introduction to synthetic biology astonished him. Synthetic biologists, he found, made living organisms do things which nature had not intended. They took tiny bits of DNA, spliced them together and inserted them into bacteria. So, a bacterium could be made to change colour or be bright enough to be seen with the naked eye. Shetty realised that this mixing and matching of elements to create new things was a bit like what artists did. But instead of using paints and canvas, synthetic biologists used life itself. Early this year, the insight would lead a bunch of his students—who knew nothing about science—to participate in a competition at Massachusetts Institute of Technology (MIT).

NCBS had been sending students for MIT’s iGem competition for the last couple of years. “This year we decided to send art students instead,” says Shetty. And, unlike scientists, the artists came up with a project which only artists could have thought of: they were going to replicate the smell of first rain in a laboratory— that odour when pure water from the skies mixes with soil.” The English word for the smell is petrichor, an unpoetic name for a phenomenon which is so emotive. The primary cause behind the smell, however, has a slightly more lyrical name: geosmin, an organic chemical.

There are many mysteries to geosmin. It does not seem to have a purpose. In soil, a class of bacteria known as streptomyces produces it. Though this was known a hundred years ago, the exact genetics of it was only discovered two years ago by a team led by David Cane, a professor at Brown University, United States. And they did it by accident. Cane’s team was studying another class of compounds called terpene, also made by streptomyces. (Terpene, incidentally, is responsible for the smell of sandalwood.) While trying to find out the gene which creates terpene, they accidentally discovered that one of the genes which they had suspected of making terpene was actually making geosmin.

Geosmin does nothing besides exuding the smell. For inexplicable reasons, human beings are extremely sensitive to it. If you have a trillion litres of water and ten litres of geosmin in it, the human nose would still detect it. “That’s about a 100,000 to a million times more sensitive than we are to any other substance. That’s why even if there’s very little of that in the soil, when you lift a clump of warm earth, you would smell the geosmin in the air,” says Cane.

We don’t know why, but nature must consider geosmin special. It is not streptomyces alone that produce geosmin. There are two or three dozen genes in other organisms which appear to encode the same thing. “What it means is that nature had figured out how to do this and that information was shared among a very large number of not just soil bacteria like streptomyces but another group of bacteria called myxobacteria and also organisms called blue-green algae,” says Professor Cane.

While no one is sure about geosmin’s uses, there are some hypotheses. One is that earthworms are attracted to soil that has geosmin in it. They eat the soil and pass it from their guts as little piles called casts, which have streptomyces. When the casts dry out, they disperse with the wind, thus carrying the bacteria to a different habitat. The bacteria thus ensure the survival of their species using that smell. But the worms must also get something out of it. Cane says, “The worms might be attracted to the soil because the streptomyces break down vegetable matter, making the soil rich in nutrients and more hospitable for the earthworm. So the streptomyces attract the earthworm because the earthworm is looking for soil which is rich in nutrients and in return, the bacteria get their spores dispersed to other places. But it’s difficult to prove this. At the moment nobody has been able to detect any other biological function of the geosmin.”

Another mystery of geosmin is that human beings love it in soil and hate it in water. Blue-green algae are found in public water supplies and let out a dank smell when they produce geosmin. Water purification companies spend millions of dollars trying to eradicate that smell. So ironically, the smell that is so loved is being studied to eradicate it.

The smell of first rain is, however, not just geosmin alone. It is a combination of geosmin and a complex mixture of oils in the soil that probably come from plants. When, through the summer, the students of Srishti learnt molecular and synthetic biology, their initial idea was to make a bacteria that could influence human emotions in some way. They brainstormed. A photo of that time shows a blackboard packed with squiggly lines. They latched onto the smell of rain because it opened so many emotions. The students researched the subject and found more about geosmin. “The initial idea was larger, where the bacteria would detect a neurotransmitter and then it would emit the smell of rain (in synthetic biology, bacteria can be made, like computer programmes, to follow ‘if-then’ commands). So, the bacteria would say ‘detect dopamine,’ the neurotransmitter for love, and then, a gene would switch on that would produce the smell of rain. So it would be like a Bollywood bacteria. But it became too complex,” says Shetty. They stuck to just making geosmin.

As per the rules of the competition, MIT sends all participants 400 bits of DNA. They are numbered. You then go to a website and find out which DNA makes what and then make your organism in the laboratory using the DNA bits. “It’s like Lego. You say you want a protein which gives the colour green and the website will give you a list of all the bits of DNA which produce green. It’s like a Frankenstein. You can look up a database of parts on the web and then figure out what parts you would need to make an organism. And then you splice these parts together,” explains Shetty.

The students did the scientific parts in the laboratory of NCBS. At the end of it, Shetty says, the experiment didn’t turn out the smell of first rain. Instead there was this smell of dampness.

But it was enough.

They won the third prize for science.

But the presentation in which they explained how a group of art students became scientists for a season, got them a special prize for best presentation. “They said that they started off as artists and are now talking to scientists. I think that impressed the judges,” says Mukund Thattai of NCBS, whose laboratory the art students had used for this experiment.