How Not To End Up Divorced

Adultery used to be the leading threat to marital peace, but then someone complicated everything by inventing the World Cup. Here’s a survival guide for those at risk. 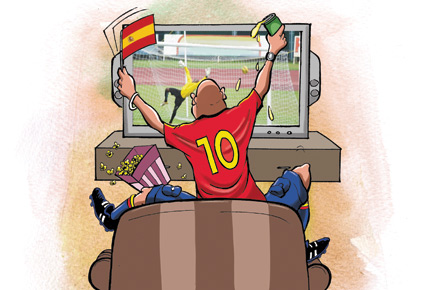 Adultery used to be the leading threat to marital peace, but then someone invented the World Cup. Here’s a survival guide for those at risk.


Let’s assume that some unfortunate woman made a huge mistake, and you are now a married man. Let’s also assume that although India’s Fifa ranking is around 337, you still want to watch the World Cup because you’re not a narrow minded parochialist.

The combination of these two things spells trouble, and you are lucky someone is here to guide you. Unfortunately, that person got unavoidably detained elsewhere, so you’ll have to settle for me.

Is this such a big problem, you ask? After all, she’s used to the horror of being married to you, so her pain threshold must be pretty high. But therein lie the seeds of your own downfall. After all these years, if there’s one thing she’s learnt, it’s this. Things can always get worse.

First, let’s list out certain myths and misconceptions, some of which are myths while others are misconceptions. For your practical convenience and reading pleasure, I will point out which is which.

She didn’t throw anything at me while I was watching the Indian Premier League, so why would she start now?

Firstly, throwing things is not what you should be worrying about. I’m guessing that happens quite a lot already. Also, as one of my friends, an expert statistician who loses money for me on a regular basis, would say, you’re comparing apples and owanges. IPL is cricket. She’s used to cricket. Cricket is the old, familiar adversary, like Lucifer, or Mayawati. Plus, IPL involves Shilpa and Preity and that nice Mrs Ambani, so she may feel a certain pride in all that woman power. They carry themselves so much better than Shah Rukh and Mr Mallya. I’m hoping you didn’t ogle the cheerleaders too much, though. In case you did, you really should think about not watching sports for a while.

Surely she’ll understand that it’s educational for the kids, and broadens their horizons and whatnot?

Newsflash! The kids have homework. They cannot watch football every evening, otherwise they will fail, and that means one extra year of school fees. Plus, none of the kids have the slightest interest in watching soccer. They like playing it. They like buying Manchester United jerseys. But they do not watch it. They have 23 different cartoon channels to watch. If you had those when you were their age, you would never have watched football either.

It only happens once in four years, so  she’ll cut me some slack, won’t she?

It depends on what you mean by ‘some slack’. There is only so much slack one human being can cut another. If I were you, I would not test the limits of human endurance on this. There are scientists who are paid to do that sort of thing. In fact, this four year gap is the crux of the problem. You’ve been watching cricket non-stop since forever, India just got humiliated in the T20 World Cup, and it’s reasonable for her to assume that you’ll lose interest in cricket for a while. But she underestimates your capacity for humiliation. So, out of the blue comes this entirely new sport that you will now spend weeks watching. If you do not follow the excellent advice that I will soon be providing you, by Day 3, she will be calling her lawyer.

It’s a beautiful game, loved by billions, so in good time, won’t she come to love it too?

As the excellent Chinese General Tsun Zoo said in The Art of War, ‘Optimism not way to win battle. Instead emperor beats up your family and you end up running wonton stall on street corner.’

Ask yourself this. Is George Clooney on any of the teams? How about Hugh Grant? Personally, I’m not sure. Research has never been my strong point. But if the answer is ‘no’, why would she want to watch 22 hairy men running at each other, and occasionally kneeing each other in the groin? Does she like watching sumo wrestling? That might give you a clue. I’m not saying no women watch sumo wrestling, but I’m pretty sure most of them must be married to the wrestlers.

I work so hard putting food on the table. Won’t she let me enjoy this teenie-weenie little thing?

I’m not sure you should be raising the subject of teenie-weenie little things in a public forum. Why let other people in on the secret? And don’t forget, the country is full of men who put much, much more food on the table. Mukesh Ambani, for example. Also, no one likes a whiner. Be a man. Which brings us to…

I’m the man of the house, so how does the question of her objecting to what I do arise?

Since you can read, and possibly even write, I have to assume that you are not a khap panchayat member. Also, you have probably read the title of this piece. If the above Misconception 6 was really true, how come you’ve read so far? Don’t fool yourself. Other people are doing enough of that already, and they don’t even have to try that hard.

My wife really loves me, and we’re so happy. Why would she even consider divorce just because I watch football for a month and ignore her completely, and come home from office early to watch matches, even though the pressure of work prevents me from doing so for the rest of the year?

As I said earlier, you’ve read the title. You’re still here. There has to be a reason.

So now I’ve cleared up all the myths and misconceptions, which is half the battle. You are no longer ignorant. Ignorance is not bliss, it is merely ignorance. Because you are now less ignorant, you will avoid making elementary mistakes, like the ones listed above. If you did, your wife would be calling a lawyer almost instantaneously, which means you would be answering all his questions while you’re half asleep from watching all those matches. This would lead to your losing your house, the children, the dog, and most of your salary, and you’ll end up running the wonton stall that we discussed earlier. If the subject of divorce crops up later in the World Cup, at least you have the ghost of a chance.

What are the things you can do to avoid the inevitable? Here is a quick ready reckoner, which you should cut out and keep in your wallet for instant reference.

1. Make full use of half time

In cricket, there’s a commercial break every three minutes or so. So you have 30 seconds to shoot off a quick question, or nod your head, or (this is the safest) agree with whatever she just said. In football, there’s only one 5 minute break—after 45 minutes. Make the most of it. Talk to her non stop. Notice her hair. Get her a glass of water (keep talking loudly while you’re coming and going). Do not under any circumstances watch the replays or the in-between analysis. If you cannot do this much, you had better start looking up wonton recipes.

Yes, we all know you watched the India-Afghanistan match during the cricket World Cup. You may even be feeling a niggling sense of regret about it, once you discovered that they sucked. I have news for you. Some teams in this football World Cup will suck too. They sucked in the preliminaries. They sucked in the qualifiers. They only reason they’re flying to South Africa to play the World Cup is that other teams sucked even more. Avoid these teams. Citizens of those countries feel compelled to watch them, which is understandable. In some countries, like China, it’s compulsory, and you can get arrested for not switching on your TV. What’s your excuse?

3. Use the Burkina Faso gaps wisely

So you sit down to watch, and you discover Burkina Faso is playing. Then you say, “Honey, I was thinking, why don’t we go out for dinner?” This is a bad plan. She is clearly Plan B. You must not do this. You must tell her the same thing—but in the morning. It needs to be premeditated.

5. Involve her in matches with good looking guys

Take a look at yourself in the mirror. Do you look like Prannoy Roy? If you do, then like Mrs Roy, she can look at you from time to time, and everything will be okay. If not, you need to involve her more closely in the matches involving handsome guys. Beckham is injured, which is a major setback for millions of men. You could involve her in matches with Cristiano Ronaldo. I think he plays for Portugal. I’m not sure, because I’m more of a marriage counselor than a football expert, and they don’t pay me enough to do actual research. In fact, they don’t pay me anything. You could help by mailing Sandipan at [censored by editor], or just SMS ‘Please pay Shovon something’ to [censored by editor].

Now that I’ve just realised this, I think I should stop writing now. I wish you all the very best. Enjoy the World Cup.

Try to make sure your wife doesn’t run away. But just to be on the safe side, take some stir frying lessons.