Give My Body Back

A new mother recounts the invasion of her body, the birth of the stranger and how there seems to be no respect for her breasts anymore 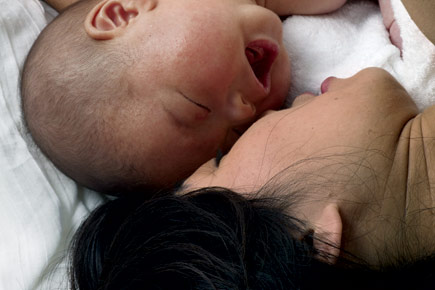 A new mother recounts the invasion of her body, the birth of the stranger and how no one seems to respect her breasts anymore


I want my body back. If I abuse it, then I want the freedom to be able to harm myself alone. If I care for it, it should be for my satisfaction and vanity alone. Indeed, I believe I cannot even allow a freak accident to take my life, since it’s no longer mine alone. It wouldn’t harm me to die, but I am now intimately linked to another in a way I’ve never been before. But that may be just my vanity speaking.

For the last 27 months, I’ve shared my body with my baby. From the moment it was confirmed that my womb had become home to a little being, the house-cleaning started in earnest. My family has always revolved around food, but this was now perfected to cater to every vitamin, carbohydrate, protein, calcium the baby might require. The lungs were cleared of even peripheral cigarette smoke, most often at the cost of my social life. And unease crept over me each time I sipped the occasional glass of wine, despite being quoted medical wisdom about its benefits for pregnant women.

Indeed, I was careful to do almost everything right. I made sure I walked and bathed with care, lest I slipped and hurt the foetus. I stayed calm—well, most of the time. And while sleeping, my duties continued: there is some obscure case for sleeping on the right that I can’t remember now. The discomfort of largely sleeping through the night in one position seemed worth enduring. That’s what impending motherhood does to you: creating the perfect nursery for the baby is just one small external detail.

I thought it strange then that I was not filled with the maternal love and joy that one is said to instinctively feel at such times. Really, how does one connect emotionally with an individual who has not even begun to exist? And frankly, I have no idea what new mothers talk of when they gush about the special bond that’s created when they hold their baby to their breast the first time. That was just a clumsy experience where neither the baby nor I seemed to know what to do. (No, I did not feel a rush of love the first moment I saw her, just curiosity really.) It was a nurse guiding me—awkwardly cradling a wrinkled, pink new-born who was yet to flicker open her eyes—as I manually pumped some milk on to the baby’s lips, prompting her to take the lead, even as my friends stood around capturing ‘the moment’ on camera.

We got into the groove soon enough, and the baby started feeding with much gusto. I watched with pride as she started accumulating the rolls of fat and the chubbiness associated with healthy babies. And my dietary precautions continued—the better I ate, the better the baby ate; the more healthy my lifestyle, the more robust my child’s growth.

It’s with the addition of these small, seemingly inconsequential details that you begin to realise that you must live—and live well—for the sake of your child. Once a parent, you begin to realise that you are now two people. Parenting can be a test of endurance—and there is no escape that you would probably willingly choose to take—but it can also teach you organisational skills like nothing else. You crave to relive your carefree past, but you also feel guilty when you have to be away from this small child who is so true to her emotions, who gets heartbroken at your departure and bursts with joy at your return. You want to do your best for your child, but sometimes, you also really want to do what you want to do.

It was while breastfeeding that I began to realise that the world perceives a woman’s body differently from a mother’s body. A mother’s breast changes its identity. It is still beautiful, but in a very different way. It is still celebrated, but there is now a purity attached to it that wasn’t there before. Where it was till recently a sexual object, kept under wraps, a breastfeeding mother can expose herself without shame. Considering the regularity of the feeds, the practical necessity of doing so without caring if the world was watching does immune you after a point. But I still admit that it was a strange feeling to have people walk in and out of the room, or sit around chatting with me as though being half unclothed and having a breast exposed was the most normal thing in our world. This was a shift in attitude I admit I could not adjust to easily.

Where was the privacy I had come to expect? While some people sought permission to be with me while I fed my child, many others did not. I often wondered whether my existence as an individual had faded in comparison to my new role as a mother? Or, was this just an overreaction caused by the rigours of taking care of a new-born child, at a time when my body was still battered and trying to recover from the shock of childbirth?

I soon started falling in love with Noor. Of course, it did take several weeks from her birth to stop referring to her as ‘the baby’, and as I came to recognise and decipher her needs, her wants and her joys from the tiniest sounds and expressions, she became a real ‘person’ to me.

And over the months, when she started becoming more aware of her surroundings and could express herself in many more ways, I was given the privilege of being her most cherished person. If I was around, she wanted me to be part of her every little experience. If she cried, she would rather I hold her in my arms. And it also meant that when I came back home in the evening after an entire day away from her, she needed the comfort of knowing that she had me back. For a child who I hadn’t the strength of heart to wean off till she was a good 18 months old, this meant the familiarity of being at my breast. Whether she was hungry or not, she would fidget and whine till I gave in to her pleas. With this physical connection established, it almost seemed as though she had repossessed me and there was nothing to worry about anymore.

I clearly remember when as a child myself, I couldn’t sleep till I held on to my mother’s arm. I can still remember how soft and cool the touch of her skin always felt. My daughter is not breastfeeding anymore, and every day, she’s becoming more and more of an independent person. Every so often, with a brush of her hand, she resists our valiant attempts to feed her, or to bathe her, and with intense pride and an enthusiasm that is catching, shows off all that she has learned to do on her own. But it’s when she wants to sleep, when she knows she will shut her eyes to the world for a few hours, that her need to feel secure is the most intense. Lying next to me, a thumb in her mouth and her other hand gently placed against my skin gives her that sense of comfort.

It will take a long time—maybe never—before I can claim my own independence. But even so, as Noor’s memories of breastfeeding fade, I now know that it’s me—and not just my physical self—that is so very important to her.