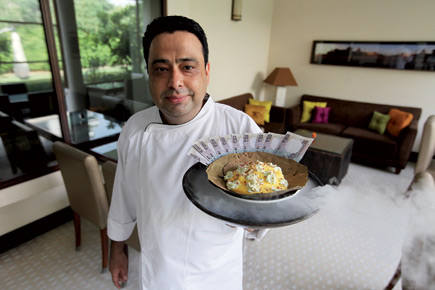 Chef Manish Mehrotra presides over one of Delhi’s most successful restaurants, Indian Accent, where it is nearly impossible to get a table without booking well in advance. We all know how good this is for a restaurant’s reputation, but it can also fill you with trepidation. “What if the food is too poncey?” is a question that crosses the mind. But, the best food, as Mehrotra demonstrates, is deceptively simple.

When we meet, Delhi is in the grip of a record-breaking heat wave. There can’t be a better time to talk about summer food. Indian Accent, which serves progressive Indian cuisine, has introduced a summer-friendly menu, like most fine-dining restaurants. “The best food in [the] summer is food that is light and easy, [that] cools you down and uses seasonal ingredients,” he says. He picks his favourite dish from the new menu to demonstrate the three laws he has outlined.

Mango Daulat ki Chaat arrives at our table with a bit of showmanship on his part. He pours water on a tray of dry ice, and in the midst of the thick clouds that waft out sits the Indian delicacy to which he has given a surprising twist.

Daulat ki chaat is almost impossible to translate—you can call it a milk puff, but that does no justice to it. Foamy in texture and sweet in taste, it is available in the eateries of Old Delhi and parts of Uttar Pradesh through winter. Legend has it that the sweetened milk is whisked, churned and set aside uncovered for eight hours; the dew of the night achieves the perfect, cloudy texture that defines it. When Mehrotra was planning his summery dessert, he harked back to childhood memories. While growing up in Patna, he would visit relatives in Lucknow and Kanpur, and what he remembers most is the food that would be served at family weddings. Every baraat would serve daulat ki chaat, which he describes as “the lightest mousse in the world”.

“I thought to myself, I can modernise this, I don’t have to set it out through the night, and then I have something that’s light and perfect for summer,” he says. In his version, nitrogen is used, through molecular gastronomy, to create the airy texture; and both ripe and raw mangoes, found in abundance through the season, are added for a sweet and sour twist. It melts in the mouth, leaving behind the mildest of aftertastes.

In Mumbai, Zoravar Kalra’s Masala Library, like Indian Accent, attempts progressive Indian cuisine and combines it with molecular gastronomy. Here too, concessions have been made for the weather and the need for food that brings down body temperatures. At first, all diners are given complimentary boxes of ‘frozen airé’ bubbles, in which liquid nitrogen is used to freeze fresh flavours like mandarin and kaffir lime. When you open the box, you breathe in the flavour, your tastebuds are tickled with the lightest of sensations, and your palate is cooled and cleansed, before the main course.

When it comes to the marvels of molecular gastronomy, Kalra says that he wants his guests to be as awed and surprised as he constantly is. The technique has also been used for that other summer staple, mishti doi, which is flash frozen and served on ice popsicles as ‘Mishti Doi Lollipops’, topped with fresh strawberry coulis and popped amaranth seeds. “It tastes better than the real thing. I think molecular gastronomy can be used to enhance the flavours and presentation, and to introduce an element of surprise into the food,” says Kalra.

He recommends another summer addition to the menu: the pepper prawns with asparagus thayar satham salad. On a bed of curd rice, that most basic and essential of summer foods, sea prawns cooked in thick pepper gravy are laid out. “This is our version of an Indian salad. When the mercury is soaring, we all turn to curd rice for comfort. The chopped asparagus goes well with the rice. The prawns satisfy the craving for hot food, and are balanced by the coolness of thayar satham.”

At the Taj Mahal Hotel’s modern Indian restaurant Varq, back in Delhi, sous-chef Ashish Uggal tells us his summer bestseller is the ‘Khurmani ke Kebab’. It takes a street food favourite, aloo ki tikki, and gives it a modern form. Potatoes are mixed with marinated apricots, pan fried and then laid out on a bed of sweetened curd. “Our version is light, the curd is cooling and it is surprising for people to find apricots and potatoes mixed together,” says Uggal.

Far from the world of progressive Indian food is Salt Water Café in Mumbai. Here, chef Gresham Fernandes holds the fort in a restaurant that prides itself on serving authentic but trendy European food. The popular hangout’s summer menu predictably features salads and chilled soups, but it houses some novelties. He is most proud of a special summer salad he invented using his favourite meaty ingredient: Refried Pork Belly with Mango, Smoked Lychees and Medicinal Herbs Salad. Here, a heavy and winter-appropriate meat is given a refreshing, summer context. The pork belly, cooked overnight for eight hours, is mixed with fresh herbs like basil, dill, lemongrass and coriander, and then cooked in a Japanese dashi stock. On the side are fresh Alphonso mangoes and charcoal-smoked lychees. “In our country, we think of salad as something with a lot of lettuce. I wanted to break that, and have discovered [that] people are ready to experiment,” says Fernandes.

When we speak with Ritu Dalmia, the star of fine dining in Delhi, she recommends Risotto Agli Agrumi, a risotto with citrus fruits, which has been introduced at Café Diva this season. (All of her five restaurants have a summer menu in place.) The risotto is inspired by one of her classic recipes—carrot and orange pasta—in which she swaps the orange for mosambi during summer months. This season, she tells us, she wanted to test an idea: if pasta can work with citrus, so can risotto. It works surprisingly well, and unlike the cheesy variants served in most Italian restaurants, this risotto does not sit heavy. Cooked in a vegetable stock, with citrus fruits like mosambi, lemons and limes, it is seasoned with fresh herbs. “What I like to do most in this season is to combine fruits with the savoury. Our salads and marinades abundantly feature mangoes and pomegranates that are available in the market through summer,” she says.

And there you have it, that age-old maxim for summer cooking: fresh and easy.