A walk in Himalayan clouds

Life-long hikers give us their top nine treks, through mountains and vales 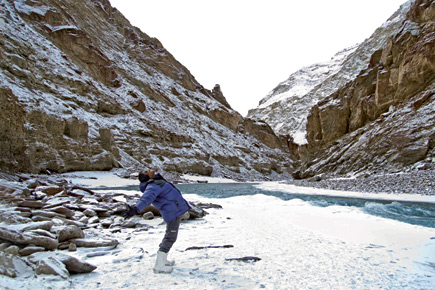 Life-long hikers give us their top nine treks, through mountains and vales

They removed their pants, spoke to each other for a while, and then started walking on the very thin layer of ice that lay before them. It soon gave way to a slushy mix of ice and water; and that is when avid trekker and photographer Nishant Verma, on his first river-crossing on an expedition to Leh with his friend, copywriter Nikhil Guha, remembers panicking. “The moment the water entered my boots… I screamed involuntarily,” he says. “It was painful as my body was already fighting the cold.” He rested for a moment on the raggedy edge of a little rock protruding out of the mountain, partly submerged in water. “I took the water out of my boots, took a breather and went back in. [It became] more painful, but it was the only way out. When we finally came to land, I tore [off] my gum boots and gloves to avoid hypothermia and frostbite.” He remembers the pain, but there was also something else: exhilaration. “At that moment, I had just one thought—this better be worth it.”

For most trekkers in the Himalayas, it usually is. Stupendous views, friendly people and relatively inexpensive travel make this an obvious summer destination. And the more obscure the location, the more travellers are humbled by the fierce beauty of nature. We asked avid trekkers to come up with a list of the most spectacular trails to follow this summer. Go long!

“There is nothing that can prepare you for Ladakh,” says 38-year-old Prashant Aggarwal, who waited for over a decade before finally going to the valley last year. “It exceeded all our expectations not only because of its beauty, but also because of the very friendly people.” Although there are many treks to choose from, the week-long trip to Markha is one of the most popular. Located between Zanskaar and Ladakh, this isolated valley runs parallel to the Himalayas and is home to Buddhist monasteries set in wild and barren landscapes that have earned the nickname “Little Tibet”. “The only problem we faced over here was that it can tend to get a little too crowded. But if you’re a Ladakh virgin, then this is a must-go.”

“There is nothing that can prepare you for Ladakh,” says 38-year-old Prashant Aggarwal, who waited for over a decade before finally going to the valley last year. “It exceeded all our expectations not only because of its beauty, but also because of the very friendly people.” Although there are many treks to choose from, the week-long trip to Markha is one of the most popular. Located between Zanskaar and Ladakh, this isolated valley runs parallel to the Himalayas and is home to Buddhist monasteries set in wild and barren landscapes that have earned the nickname “Little Tibet”. “The only problem we faced over here was that it can tend to get a little too crowded. But if you’re a Ladakh virgin, then this is a must-go.”

Known as the hippie trail of India, Kheerganga in the Parvati Valley of Kullu is a meadow that is definitely worth trekking to. According to local legends, this is the place where Shiva meditated for over 3,000 years. It boasts natural hot springs that will take your breath away. “It is a six hour trek like [no other]. You will walk through beautiful meadows and forests and arrive at a peaceful place that you will never want to come back from,” says 20-year-old Shantanu Bose, who has been on this journey three times. “We go every year. It is easy and everybody can do it.” The valley trails through another valley and then through the village of Malana into the hippie town of Kasol. You can either choose to camp there or at Barshaini to start your trek to Kheerganga.

This trail passes over the Dhauladhar range and ends at Chamba, through rhododendron and deodar forests. Once upon a time, it was used by the Gaddi shepherds to take their flock to the summer grazing grounds in the higher meadows of the valley by the river Ravi and Lahaul. It is more of a hike than a trek, starting from Galu temple near McLeod Ganj and passing through a base camp; choose from Triund, Laka Got and Lahesh Caves. “If you want to initiate someone into trekking, this is where you take them. The trail is not only moderate but also very beautiful,” says 26-year-old Samrat Singh, who went with his family last year. The right way to do it is to break at Triund for the night and continue to Indrahaar the next day. Some of the views along the way are the peak of Mani Mahesh Kailash and the snow-covered Pir Panjal Range.

Known as the Hidden Valley of Happiness, the Tsum Valley at the edge of Manaslu, the eighth highest mountain in the world, is not an expedition for rookies. It takes up to 14 gruelling days to complete. Believed to be one of Buddhism’s sacred hidden valleys, this place is also home to thriving ancient monasteries. “It is like stepping into a period movie and getting lost,” says 35-year-old Tennyson Bankoti, who went to the valley last year. “You see things that you never thought you would: yaks grazing against breathtaking beauty, virgin mountains. It is unforgettable.” Opened to tourism only a few years ago, the valley has another unique feature. “A Buddhist monk usually travels with a group and teaches the basics of Buddhism on the way, giving gives optional mediation lessons.”

You cannot do this one without training. It is one of the toughest in this trek-filled state and takes around eight days to complete. The trail around the fabled Mount Kailash, also known as Kinnaur Kailash, makes up a 60 km trek, starting at Thangi and leading through Charang, Lalan Ti, Charang La and eventually ending in Chitkul—the last village accessible by road, near the Indo-Tibet border in Baspa Valley, Kinnaur. “It is the most difficult trek I have done so far,” says 32-year-old Priyanka Sahai, who has been trekking since she was a child. “The biggest problem was unclear directions—if you don’t have a compass or a guide, you will definitely get lost here. There is no network connectivity on the way. It is non-touristy and you definitely have to train for it, but in the end, it is really worth it because Chitkul is one of the most breathtaking places I have ever laid my eyes upon.”

This is a 100 km trail of spectacular views and adventure. “It is very easy to get carried away with the beauty of this trek and forget about the hardships you’ll have to endure along the way. But one must always take a realistic call on whether you can do it, else you will cause problems not only for yourself but also for other trekkers,” says Sahai, who went to this popular hiking mecca. She admits she couldn’t complete the trek on her first attempt, being physically unfit. “Plus, the trails are undefined, and finding your way through the great Himalayan national park can be tricky. It is very daunting but extremely alluring because of the adventure it offers,” she says. Sahai says that crossing the Parvati River was the most terrifying experience of her life. “But in the end, the exhilaration of climbing 17,457 feet is overwhelming. The views help too.”

A moderate four day trek like no other. Also known as the lake of the moon, Chandra Taal is a sweet water lake located amidst the barren landscapes of Spiti. (It is the source of the river Chandra, which later combines with the Bhaga to form the river Chenab.) This bean-shaped lake is known for its crystal clear water and the different shades of blue it reflects as the day passes. Small meadows on either side of the lake make it an idyllic camping ground. “It is the night sky at Chandra Taal that blew me away— and the overwhelming silence. In that moment, I almost knew what was being spiritual all about,” says 28-year-old Rahul Sodhi. “We started our trek from Kunzum Pass, and it was an easy downhill walk thereon, with great views of the Himalayas. We combined our trek with jeep safaris in places and it worked.”

Known as a winter trek, Kuari is still possible in the summer: a spectacular region in Garhwal, known for its wild landscape and beauty. This trek should take 10 days, traversing the villages of the Chamoli district. “The best experience for me was how the landscape changed with each step. One minute we were walking through silver oaks and the next, through rhododendrons,” says Prashant Aggarwal. “Most summer treks finish in Auli, and although it lacks the charm of nearby places, it is known as the place where the guru Shankaracharya attained enlightenment.” The next day you can either head back to the plains or visit the nearby shrine of Jyothi Math.

After Nanda Devi National Park was declared a UNESCO Heritage site in 1988, the mountain’s East Base Camp became the closest place to witness the majesty of Nanda Devi. It is relatively accessible; you can take the trans-Himalayan trail through upper Kumaon to get here. It will take 10 days to arrive, and your trek will start at the small town of Munsiyari. What makes this peak special, besides its religious appeal, is the fact that it is surrounded by the meadows of Narspanpatti. Milam Glacier Trek, on the other hand, explores one of the largest glaciers of Kumaon, covering an area of 37 square km. The trail crosses forests, waterfalls and villages, encountering chunks of ice and wooden bridges. This picturesque trek is long and adventurous, and moderately difficult.