From the humble langot to G strings, funky trunks, boxers with Superman prints... male underwear in India has come a long way. 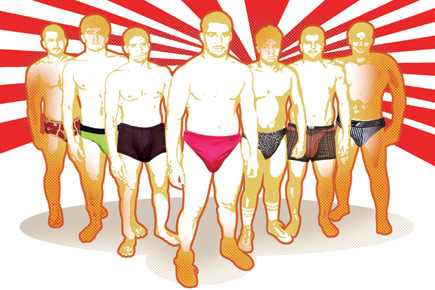 From the humble langot to boxers with Superman prints… male underwear in India has come a long way.


Honest confession: When a story on the chaddi was discussed, eyes lit up all around. It’s the sort of story you can have fun with, one of the bosses insisted, till another boss asked for a brief on the brief story. You see, it’s difficult not to succumb to temptation about writing a racy story about the brief. We all wear it, but unlike women, men never go chaddi shopping in a group and never ever talk about what innerwear does what for their partners. So this, ladies and gentlemen, was going to be a serious story.

Till Delhi-based Stylist Yatan Ahluwalia told us that Hom’s fastest-moving underwear in North India were skimpy organza, and sometimes even transparent G-strings in large and XL sizes, and it was swiftly replaced by something altogether gross. Indian men spending upwards of 1,800 bucks on a piece of cloth smaller than a ’kerchief? Surprisingly, when designer Wendell Rodericks laughed a couple of seasons ago, asking, “Who wears underwear in summer?”, we didn’t know it was a jibe drenched in Indian history. Some 2,000 years after Indian men went about commando, things are threatening to return full circle to the kaupina (first Indian G-string). Or worse, nothing.

Till not very long ago, we Indian men wore nothing under our dhotis. Thanks to the sultry subcontinental climate, the loincloth was actually both outerwear and innerwear. Undies simply didn’t exist. Surprisingly, though, the lack of consciousness has lingered. Till recently most Indian men, yours truly included, didn’t pay much attention to the underwear as long as it did the job.

Unlike women, men were never really afraid of being caught with dirty knickers on. Thankfully so, otherwise the world’s largest democracy might have found itself paralysed with the fear. But life is changing. Denied underwear fashion all these years, the Indian man is more than willing to bring out the underwear from the ghetto and let his credit card bill bulge, once the sole preserve of female lingerie shopping expeditions.

So how did we get here? There is evidence to suggest that Indian men did wear the antariya (made of sheer cloth and passed between the legs to be tucked behind) that finds stray mention in texts around 250 AD. But it was, again, outerwear. The biggest cultural shift in men’s underwear as well as upper body wear for women (there was no upper garment till then) came with the Muslim invasions and the subsequent Muslim rule and its brand of conservatism.

The underwear came into its own only once people at large, who had shunned sewn clothes like the bichchoo booti (poison ivy) except for military use, began to try on bandgulas, jamas and churidars (one of the first Indian fashion trends of medieval times). Yatan Ahluwalia, stylist and fellow chaddi researcher, recalls an exhibit at the Agra Fort museum showing an early version of the underwear, a Mughal predecessor of the longjons if you will. “It was in the form of layers and tied in a sort of churidar like fashion,” he says.

Somewhere in those layers lay the kaupina—the first Indian G-string—evidence of which can be found in the drawings of European visitors to India in the 18th and 19th centuries. The kaupina was a loincloth passed between the legs and held by a string at the waist. It’s worn to this day, usually by mendicants and holy men, some of whom trust only the kaupina to cover their vital organs. It’s also prescribed as the magic mantra for celibates who dedicate themselves to the creation of upward flowing semen, not to mention heightened spirituality and physical self control. The kaupina has also been linked with Lord Shiva.

But it isn’t the only piece of underwear closely integrated with religion. At the end of the 17th century (1699); the kachcha as one of the five symbols of Khalsa Sikhs brought in another revolution under the kurtas.

Then the British brought the union suit to India—call it an ancestor of the baby bodysuit—that they had been wearing since the Industrial Revolution. While the British and some well-off Indians switched to boxers with elastic waist bands, others stuck to traditional langots.

By World War II, soldiers were being issued drab, olive-green shorts with buttons. And even as Indians chose to shun underwear, Indian cotton remained the fabric of choice. In fact, David Landes in his celebrated work, The Wealth and Poverty of Nations, credits it with having transformed the Western standard of hygiene.

Indians historically resisted anything that smacked of regimentation, but somewhere along the way, the kaupina became more functional and the loincloth shrunk into the langot that gained national prominence alongside khadi kachchas till the underwear revolution happened in India. Having someone like Mahatma Gandhi behind it, or in it if you will, helped of course.

However, the most notable stage in the evolution of the desi underwear was the Y-fronts (body-huggers with pee flaps). But then, almost 60 odd years after Y-fronts were first invented, and coinciding with the advent of colour TV, flapless Frenchie snugfits took India by storm. Soon, there were men jumping out of windows in Frenchies and posing in the middle of the road with their gowns fluttering in the wind while they romanced girls in sinfully satin dresses. Yet, relatively sober Y-fronts ruled the mass market.

BLAME IT ON BOLLYWOOD

However, much of the kachcha revolution was thanks to Bollywood. The underwear de etre of the north, the kachcha often liberally flirted with the lewd, thanks to Dada Khondke and Shakti Kapoor’s crass humour. Tragically, the long, big blue vertical stripes kachcha with a string hanging from the waist soon became iconic. It still evokes painful rushes of Shakti Kapoor dancing with the string of his drawers in Raja Babu. But there are happier memories, courtesy Mahmood who had a penchant for dancing with his lungi up and kachcha in view. But the Kachcha King is Dada Khondke, complete with double entendres.

However, the underwear’s sexual liberation in India didn’t happen until Kaizad Gustad’s Bombay Boys, often dubbed the first gay indie film, came about. The movie may have been confused as one with homosexual undertones because the heroes spend most of their screen time clad just in underwear. At one point, they even do a striptease in regular undies. But more importantly, the film marked the coming out of the closet of the underwear.

Real India too kept pace. A gang of armed decoits terrorising north India picked up the kachcha as a call sign. Thus was born the Kachcha Baniyan gang which went on a rampage of murder and robbery in Haryana and Uttar Pradesh, clad in their innerwear.

But there was no turning back in Bollywood. Stylist and designer Surily Goel ensured Saif Ali Khan made a huge style statement with his underwear waistband peeking over his denims. And boom, suddenly the waistband became aspirational, even fashionable. Shortly after, Sohail Khan decided to dance in his red boxers, giving them their 15 minutes frame and fame.

“Four to five years ago, the VIP Frenchie was the largest selling style in India. But things have changed now,” says Praveen K Reddy, director, SR Mills, licencees for Playboy underwear in India. According to him, youngsters have a fondness for underwear with an outer elastic band, both as a tribute to Saif as well as in keeping with international trends. “Whatever the brand being worn,” he observes, “the fact is that people now want to flaunt the band.”

BOXERS, BRIEFS AND ALL THAT JAZZ

Incidentally, the brand that Saif started flaunting, Calvin Klein, has already made its market debut in India and is reported to be making quite a killing with its male briefs (giving another twist to Brooke Shields’ memorable ‘Nothing comes between me and my Calvins’). So, things have moved swiftly from not having any choice in underwear to more than 35 styles in colours enough to give the rainbow technicolour nightmares.

Even then, it’s still early days for the male underwear. “Women’s lingerie has seen an amazingly large number of brands entering the market… but men too are conscious of what they wear inside. In India, the underwear market is only beginning to evolve and the brief remains the most popular cut in men’s underwear,” says an industry insider. She does, however, concede that even the boxers are gaining popularity. Even without the equivalent of a Bill Clinton endorsement.

Ahluwalia, who brought high-end underwear brand Hom to India, says it took us forever to move beyond the Y-Front. But now that the move has happened, Indian men are not letting anything hold them back, from choosing patterns on par with women’s underwear to those bordering on the risque. “Our G-strings have been outselling the regular white cotton briefs by almost 200 per cent. In fact, most of the stock is re-ordered even before it hits shop shelves,” he reports.

The boxers remain afloat as a favourite, an ode to our kachcha heritage perhaps. According to Paul Smith’s store manager in Delhi, the signature multi-stripe boxers are giving briefs and trunks a major whooping at the cash counter.

Yet, this is not about tradition. Uniformity of the sort that Indian men demonstrated when they swore loyalty to the langot is passe now. We no longer wear the same underwear, nor do we wear it in the same colour. Ahluwalia says north India is more experimental and progressive in their underwear choice, compared to the rest of the country. Delhi sells more G-Strings than Bombay and Goa put together. And it’s also into wacky prints. Mumbai, on the other hand, is into filmy underwear with the pants slipping down to put the waistband on exhibition. All this, in solids. Bangalore is sold on sporty and colourful innerwear, perhaps the globalisation effect.

Expect the underwear market to evolve even faster from here on. The pointers, especially on questions of utility, are interesting. A couple of seasons ago, designer Narendra Kumar sent out a model wearing briefs with the words ‘Male Function’ emblazoned across the front. This was soon after a ‘wardrobe malfunction’ at a Fashion Week had hit headlines. The word play did its job. It dropped jaws. And for once, in clear terms, it asked: who says women have all the fun?

As far as my opinion on the subject is concerned, I agree and disagree. To elaborate, I don’t think G-strings for men work—unless you’re wearing your woman’s and it’s purely result driven. A good looking pair of boxers (Superman prints and condom cartoons are current rages) are better any day—if you don’t plan on doing any running, that is. They are difficult to wear under slim jeans, though. But who cares?

My big vote goes to fun briefs. A pair of bumble bee print briefs, I have discovered, can be a good conversation starter.