IF YOU WERE to look closely, each stamp reveals a layer of stories—of powerful monarchs, architectural marvels, significant events, extraordinary narratives of ordinary people and rare nuggets of information. These tiny bits of perforated paper end up acting as prisms for viewing facets of history. And now, at the Bikaner House, in New Delhi, 120 of these have transformed into portals, taking one back to the 1860s, when the Nizam reigned over the princely state of Hyderabad.

Hailing from 1869 to 1949, the stamps are not just remnants of a bygone era but also shed light on the region’s material, economic and cultural heritage. At one end of the show is the rare Penny Black, issued on May 6th, 1840, the world’s first prepaid postage stamp, symbolic of Britain’s standing as a colonial power. At the other end is a stamp issued by Mir Osman Ali Khan, the seventh and last ruling Nizam. Unlike the British stamps, which featured the image of the reigning monarch, the Hyderabad ones are devoid of human figures, as it was an Islamic state. “However, there is a rare example of a human figure on a Hyderabad stamp, issued to commemorate the World War II. It shows the back of a man entering his house and being greeted by his wife. The Nizam supported the British during World War II, and this stamp celebrated the return of his troops,” says Pramod Kumar KG, managing director, Eka Archiving, who has curated this exhibition.

It is such interesting revelations that are held within Property of a Gentleman: Stamps from the Nizam of Hyderabad’s Dominions. Presented by the Gujral Foundation, the show features rare philatelic wonders from Hanut Ewari’s collection. These once belonged to his grandfather, Nawab Iqbal Hussain Khan, the postmaster general under the seventh Nizam. “There are nearly three million stamps in the Ewari collection, but I have seen only the Hyderabad ones,” says Kumar.

As one of the premier princely states in colonial India, with a 21-gun salute and the Nizam having the unique title of ‘His Exalted Highness’, Hyderabad got to print its own stamps. According to Kumar, most of the artwork for these was created in England. Some of the earlier ones were even printed there, a task which eventually moved to Hyderabad, though the whereabouts of the printing press are still unknown.

These stamps compose a picture of a progressive and modern state, where inclusiveness was celebrated. For instance, the post stamp and postage featured the value in the languages spoken across the Nizam’s domain: Marathi, Telugu, English and Persian—and, after 1930s, Urdu.

“Because human figures couldn’t be depicted, stamps began to feature architectural monuments and natural wonders from across the state,” says Kumar. These included landmarks such as the Ajanta caves, the Kakatiya Gate, Chand Minar and the Madrasa of Mahmud Gawan built in 1460s. Towards the start of the 20th century, modern-day institutions such as the Osman Sagar Reservoir appear on stamps as well to showcase the state’s innovative outlook.

For the Gujral Foundation, this exhibition marks a foray into design and architecture. “This tiny object talks about notions of power, nation-building, empire creation, and more. The design holds so many details within—the value, origin, who commissioned it and the scripts in use,” says Feroze Gujral, founder and director of the foundation.

The exhibition also features rare postal memorabilia: postcards issued by the Nizam’s government with ‘Nizam’s Dominions’ inscribed across and a crescent moon at the centre; envelopes with crests of nobility such as the Salar Jung family; blind stamps, monograms; and more. “Hanut has managed to build on the collection by adding allied material,” says Kumar. Even though bulk of it is in good condition, Eka Archiving got qualified conservationists to mount it. “We had to make sure the ink on the stamps didn’t fade. So, we had custom-made box frames, with LED lights, to ensure zero damage,” he says. Textile conservationist Deepshikha Kalsi created the mounts for the fragile stamps using superfine, strong silken threads.

It is coincidental that two exhibitions about the Nizam’s Hyderabad are taking place in the capital at the moment, both adding to the narrative of the princely state. One is, of course, Property of a Gentleman, and the other is Jewels of the Nizam, on view at the National Museum. “Both reflect Hyderabad of the 19th and 20th century, though the jewels are slightly older than the stamps. Both reflect a progressive ruler, who clearly knew his mind,” says Deepthi Sasidharan, director, Eka Archiving, and co-author of Treasures of Deccan: Jewels of the Nizams. “He ruled over a domain the total area of which was close to modern-day UK. The empire stretched from coast to coast, with flourishing trade at the heart of it. In such a scenario, both stamps and jewels were alternate expressions of generous revenue.”

The Property of a Gentleman also showcases just how systematic the postal system was back then. For instance, there were strict rules about where the post of a deceased person was to be taken. “We really need to pay attention to the philatelic history of our country. As our lives are changing rapidly, we are losing out on knowledge of other vital means of communication. We don’t look at how information was passed earlier. We have to realise stamps have great symbolic meaning—there is an emblem, a seal, imagery. The beauty and the history behind them needs to be conveyed,” says Kumar.

Why are stamps important?

“First and foremost, they are the repository of the sovereignty of a country,” says Devika Kumar, former deputy director-general, philately, India Post. “For instance, the stamp issued on the anniversary of the First War of Independence [in 1857] peels off like an onion. The cover design shows the soldiers setting off to Meerut. There is also MF Husain’s painting of Rani Laxmi Bai and the Begums of Awadh,” she says. In India, one has seen several such instances of artists designing stamps. “For instance, there is a series on Mahatma Gandhi, a bulk of which has been designed by a single artist, Sankha Samant. He has, incidentally, done most number of stamps—300—for India Post,” says Kumar. Stamps have also shone the spotlight on the country’s cultural legacy with special series on dance, music and jewels of India. “We also did a series on the Himalayan peaks, and one on the anniversary of the scaling of Mt Everest by Edmund Hillary and Tenzing Norgay. It was a pleasure to have the former present for the preview of the stamp,” she says.

(Property of a Gentleman can be viewed at the Bikaner House in Delhi, till March 24th, 2019) 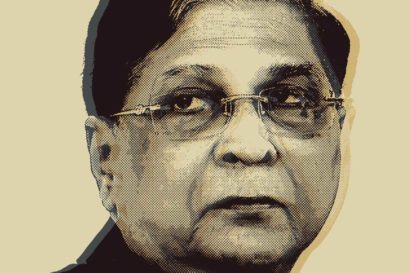