You Are No Safer for This Verdict

The judge has spoken. Ajmal Kasab is guilty. Our Home Minister has declared that this is a message to Pakistan and a victory for India. Is it, really? Not a chance. 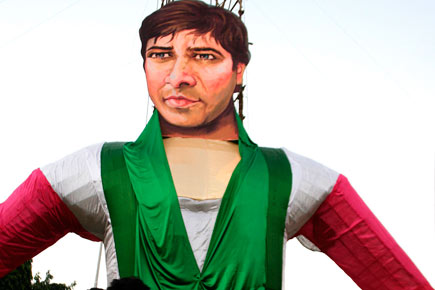 Our Home Minister declared Ajmal Kasab’s conviction a message to Pakistan and a victory for India. But is it?


They are laughing, the believers gathered in Muridke. This puny hovel town, a 20-minute drive out of Lahore, is the epicentre of hate—the headquarters of the Lashkar-e-Toiba. The jihadists here have heard the news; the verdict from Hindustan is out, that Ajmal Kasab will hang to death.

They are amused. So usual, they say, for India to fry the small fish. Meanwhile, they sit as pretty as a group of bearded fanatics with Kalashnikov rifles can be. As far as they care, this case is closed.

They are armed and ready for the next strike against India. They are immune, and far from the reach of the ‘superpower’ of South Asia (isn’t that what India likes to believe itself to be?).

That much is evident from the widespread and near delirious joy across that vast tract of land called India at the puerile achievement of the just announced ‘guilty’ court verdict in the fight against Islamist terror. It is clear now—India will have to eat its mighty words and swallow its tall claims—that it can do nothing to Pakistan.

‘Dossier’ is such a wonderful word. It sounds so serious. How nice it would be, had America, post-9/11 written out a dossier and sent it to Osama bin Laden’s post-box number. Hey, guess what, we’ve got dope on you! You are guilty! Well, Pakistan has decided to ‘ctrl alt del’ all those dossiers from India. Take that, you foreign office mandarins with your grand office facades!

The truth is that in Ajmal Kasab what we have is a man who was ready to die anyway (indeed, he may be surprised that he did not), and the Pakistani cat keeps the cream. Hafiz Saeed and Zaki-ur-Lakhvi are not just random names, they expose for the whole world India’s lack of strategic reach. The hollowness of the superpower, even a regional power claim. What is worse, this pleading for Islamabad to read Indian dossiers and act elicits exactly the reverse result. This namby-pamby method invites another attack. In strategy, if you demonstrate you cannot punish, you embolden. Every school bully knows that.

For all those of us who think that hanging this man is worth anything, it’s much much less than to die a needless random death when you go shopping next time, or simply if you happen to commute to work or drop your child off at school.

They have already told you they will hit hard and that they can get you in the crowded Sarojini Nagar market in Delhi, or in a hospital in Jaipur, or the Parliament, or at the Oberoi—or, if they feel like it, at all those places simultaneously. The cops? Your local Station House Officer can’t be trusted to do even the most basic policing, and somehow, when even our Prime Minister speaks with menace, the masters of terror sitting around in Muridke yawn.

This Government will catch the perpetrator if he cares to survive an attack—which in any case this particular Lashkar operative did not want to. Beyond that, India will do nothing. Indeed, it has no capability to do anything. If you die in a terror attack, you will be a footnote in, you guessed it, yet another dossier.

Okay, we got a killer, and we will hang him. But so what? The Government of India, indeed the Prime Minister himself, was once committed to bigger things. It was not so long ago that innocents were butchered, that children were orphaned, that families were devastated, that brave policemen gave their lives in Mumbai. The Special Court ensured a verdict in 17 months so that we can all remember it like it was yesterday, and TV coverage did its bit. Those who lost their beloved will never forget anyway. The Government’s forceful stance of not talking to Pakistan until and unless the guilty are brought to book had reassured them all at that point; they thought their elected representatives were behind them. That they shared their grief.

The same people are now saying that hanging Kasab is all the retaliation, all the victory that they can deliver.

The Prime Minister is obviously a great believer in Socrates, that rhetoric is the reality, that rhetoric alone will do. Not talking to Pakistan unless it delivers on the Mumbai carnage was the central plank of India’s foreign policy. What he really meant was that New Delhi will engage Islamabad even after the attack in the heart of South Mumbai that claimed 166 innocent men, women and children. The children are important. They were not spared for a purpose—to strike fear into the deepest consciousness of India. That fear has struck root. India is talking. And how.

This bunch of terrorists and their sponsoring government of Pakistan has always considered India a supine and weak country, and now ready once more to roll over and play dead after making a little noise. Remember the Kandahar hijack or attack on Indian Parliament? It must be getting a little boring for Pakistani troublemakers; they must be complaining that these dull Indians don’t do a darned thing other than ‘strongly condemn’ these ‘dastardly acts’. “No damn fun, dude,” they must be saying in Muridke.

And they are right. Just last week, in Thimpu, our Prime Minister was all smiles with his counterpart from Islamabad. Predictably, he got absolutely nothing from that country either on the Mumbai attacks or a closure of the killing camps. Both sides later said that there was a “trust deficit” that needs to be bridged. What a revelation! And this, after India’s Prime Minister did get something from the earlier pathetic meeting in Egypt—an earful on Baluchistan.

AN END OF OPTIONS

As shameful as the ringing laughter in Muridke, or perhaps more disconcerting, is the bluster that rules in New Delhi. The Home Minister says that the verdict is a victory for India. A victory? Historians do not use that term lightly. How can it be proclaimed a victory when it is little more than an open invitation for another attack? Does he think of Indian citizens as morons—unaware of the Government’s impotence? Only last week, there was a credible Lashkar threat from Pakistan of another attack. Both sides—and common Indian citizens—know it’s ‘when’, not ‘if’, the next attack will come.New Delhi’s inability to make Islamabad pay for its role in organising such a terror operation signals that it was an act of acceptable damage as far as the Indian Union is concerned. How many thresholds should there be? In fighting Pakistan, are a vibrant spirit, civil society and rule of law the most effective weapons? Says who? Well, by now it should be clear they are not working.

AN ACT OF WAR

The honourable judge was right in saying that 26/11 was an “act of war”. The correct mode of justice in an act of war is via a military, not civilian court. To deny the Kasab trial the oxygen of publicity was critical. This would have ensured that Kasab’s two co-accused may have had a tougher time explaining just what they were doing with those maps of Mumbai. Instead, people get newspaper reports on Kasab’s unhappiness with the food and his cell (prison cell, not phone; the system was really tough there, he was denied access to a cellphone). And, as the trial progressed, on how he was not looking as perky as he’d looked originally. Whereas the fact that he was looking perky at any point—the man was part of the team that killed 166 innocents, mostly Indian citizens—should have been a matter of shame.

It’s time for Indians to ask: have we no shame? Every time Mumbai goes through some disastrous experience, our editorial pages are filled with paeans to the ‘Mumbai spirit’, ‘the Mumbaikar’s resilience’.

Why should that spirit need to be called upon so often, why should ordinary citizens, everyday people, need to be so resilient? Why cannot the State guarantee, even to some extent, that a citizen’s dignity is not recognised after a disaster, but all the year round, every single day?

And there’s still a lot left. Kasab can go in for a mercy petition, and he can count on the President of India making no exception about this act of war, just as she hasn’t for another act of war, for which one Afzal Guru, after being convicted by the Supreme Court for his role in the Parliament attack and sentenced to death, bides his time in jail. Just what is the President so busy with that she cannot go through the 50 odd mercy petitions piled up on her table? Is the Supreme Commander of the Indian Armed Forces not bothered about acts of war and treason?

By not acting on the Supreme Court’s decision either way, justice is being denied. The last hanging in India was in 2004 and by the time Kasab’s number comes, it could well be 2025. So, as things stand, in a dirt poor country where Maoists are rising against the State for want of water and food, we will continue to spend about Rs 200,000 a day to ensure that Kasab is safely alive. That’s a total of Rs 109.5 crore. Yes, you read it right.

So, Kasab will live at the Indian taxpayer’s expense, the terrorists in Pakistan will regroup and re-attack, and one of us will die a sudden violent death. This death, of course, will be ‘strongly condemned’. Be assured and comforted, it will be a ‘dastardly act’.

THE TIME FOR A DECISION

India can either talk to Pakistan or it can act and stop terror. It can’t do both. It is absurd to say that the nuclear equation has made it impossible to challenge Pakistan. That is laziness, not strategy. There are several levels short of war that can make Pakistan deliver on terror. First, it must be understood that Pakistan is an enemy country waging war on India. The need for India to do business with Pakistan is minimal. The turnover of one Indian firm, ONGC, is larger than the entire Karachi Stock Exchange. The cutting off of trade and transport ties is the least India can do till the men that India wants are handed over, and demonstrable evidence of action against terror camps undertaken by Islamabad.

The other option is to revive extensive ground level intelligence networks and covert operations in Pakistan that were reportedly dismantled and defanged under the regime of former Prime Minister IK Gujral. The agenda is to get those who make India insecure. A superpower without Special Forces that can deliver beyond its own territory is no superpower at all. This would also be far cheaper than the money spent already on Kasab’s upkeep and well-being in prison.

Lastly, if all other calibrated moves fail, India could go in for a limited attack. At Kargil, the Pakistani forces tested India’s nuclear threshold. They know that even a frontal assault on India will not provoke a nuclear response. If this failed state does not stop its acts of war against India, a time will come—sooner rather than later—for India to test the Pakistani nuclear threshold.

However, if this smugness persists over Kasab’s hanging as a victory and message to Pakistan, we are doomed. It is, in fact, a message from Pakistan—that you cannot touch us even after our daring raids on innocents in downtown Mumbai. Right now, a chain smoking general in Rawalpindi may be smirking as you read this, and getting ready to resend the message.